Dottie and I just got back from Michigan to see Seanna as Alice and the Knight in her high school’s performance of Alice’s Adventures of Wonderland.

This was Dottie’s first time on a plane and we took a nonstop flight from Mesa to Grand Rapids.  Chris took us to the airport at 5 in the morning and by 7:30 we were in the air.  Dot was very brave.

After arriving in Grand Rapids, we rented a car, drove to Muskegon, checked in to our hotel and went over to visit Nic.  We had a good time discussing the impending apocalypse. 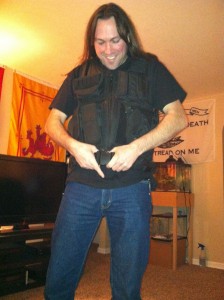 We went to dinner and then had to get over to the high school to pick up Seanna from play practice.  From there, we went to pick up her bags and back to the hotel as we were all pretty beat.

Before going to bed, we opened presents.  Dottie brought Seanna a Jack Skellington Christmas ornament, an ornament with Alice in a glass bottle labeled ‘Drink Me,’ a Queen of Hearts journal, and a really nice ceramic coffee mug with pictures of the Cheshire Cat. I brought Seanna an Alice in Wonderland ‘ear hat’ from Disneyland, a doll of one of the Nightmare Before Christmas characters and a framed print of scenes from Tim Burton’s Alice in Wonderland with actual film pieces embedded in the matte.  The print was really an early Christmas present. 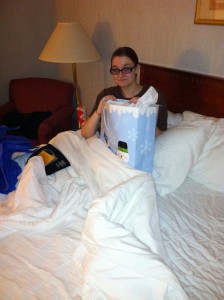 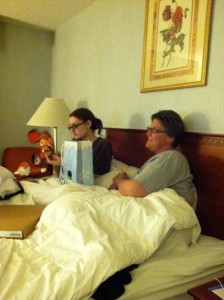 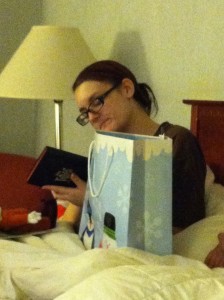 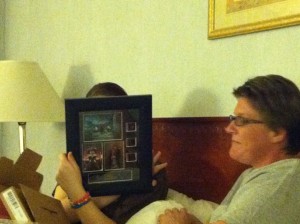 Friday morning we hurried to get up because Seanna had school.  While she was in school, we went over to visit Heather and Shiloh.  It was really nice to catch up and introduce Heather and Dottie.

We picked Seanna up after school and went to get some dinner.  It was a nice chat, discussing art school, traditional college art programs, custom shoes Seanna paints and sells, and teenage gossip.  We also looked in a few thrift stores for a nice jacket for her boyfriend, Jesse, to wear at the winter dance next weekend. No luck.

This was pretty much the weather all day: 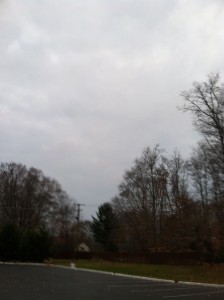 Seanna had to be back at school at 5pm and the play started at 7pm.  In between times, Dottie and I went to Meijers to pick up a small cake and flowers.  We dropped the cake off at the hotel room, picked up the video camera and went to the play. 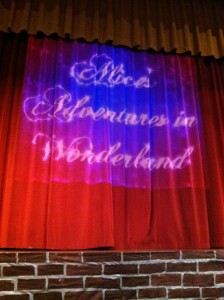 Inside the auditorium, Alice (Seanna) was sitting with her sister to set the scene for the play. 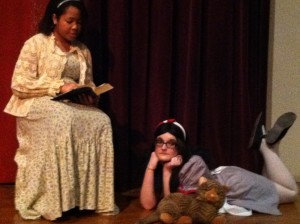 There were actually 10 Alice actors (one for each scene) but Seanna had the longest part and she was definitely the best one.  It was practically impossible to get a good picture during the performance due to the lighting.  Seanna was also the comedic role of the play, the Knight, and received many laughs. 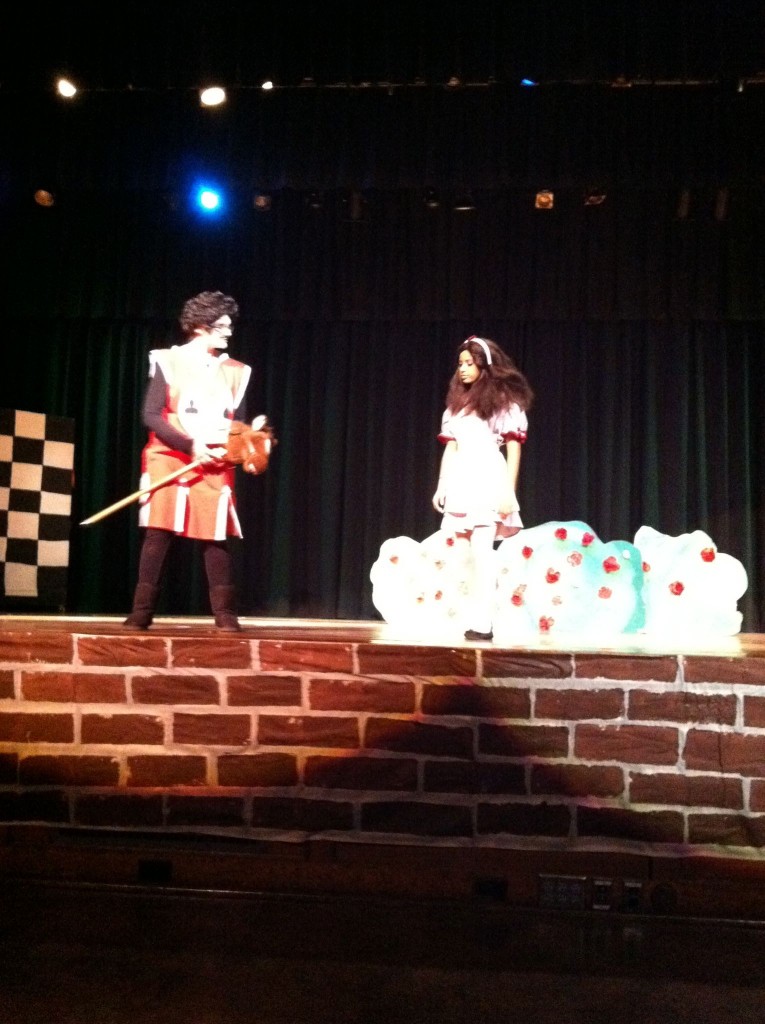 Luckily Dottie was taping the show on her video camera and I really hope it turns out.

After the play, Seanna made her rounds to say hi to adoring fans.  When she was done, Dottie and I took her out to dinner.  By this time, we were exhausted and went to the hotel and fell asleep.

The next day, Saturday, Seanna wanted to go to the mall and look for winter dance dresses.  Translation: she wanted mom to buy her a winter dance dress.  The first place we went was to Hobby Lobby to get some blank sketch books and stickers because Seanna decided to make custom story books for her sisters for Christmas. We made it to the mall slightly before it opened by went into one of the department stores and ran into this: 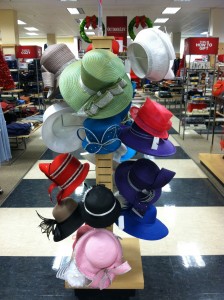 At the mall, Seanna tried on quite a few dresses. 15 altogether.  In her defense, some of the dresses she didn’t like but just tried them on to make me or Aunt Dottie happy.  The selection of dresses was also limited.  I don’t think winter dance is a big enough thing there for the stores to stock fancy dresses in December.

Seanna finally settled on this dress…. 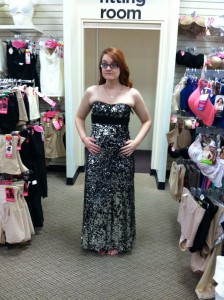 ….and then it was off to find shoes.  This pair ended up being the winner.  She also picked up a pair of winter boots.

We were leaving the mall and ended up at a display where they had animal head hat/mitten things for sale.  Ellie had seen these at the zoo a couple of weeks ago and really wanted one but they were too expensive.  The mall kiosk had them for $15.  Aunt Dottie decided her girls each needed a fancy hat so Seanna got a wolf and we picked out one each for Ellie and Rosie for Dottie to give when we got off the plane. 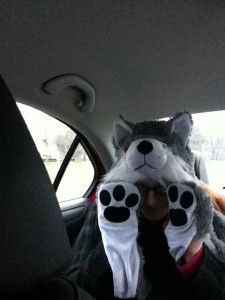 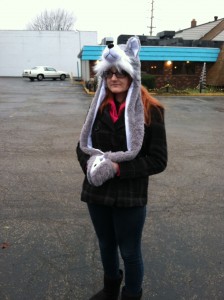 From the mall, we ate lunch at a pita restaurant, drove by the beach, hit the coffee shop and then went to the cemetery to visit my dad.  We chatted at my dad’s gravesite for a bit and when we were done, it wasn’t quite time to get back to the high school for that evening’s role call.  One more drive by the beach and we dropped Seanna off.  Then Dottie and I went to the  hotel to grab the video camera and off to the show.

Both nights we got extra tickets so Seanna could have an ‘un-ripped’ copy of the ticket for her memory box. Aunt Dottie thinks of everything.

The Saturday performance was just as awesome as the night before.  The only boo was Dottie’s memory card on the video camera was full by around intermission.

After the show we went over to Heather’s again to meet her boyfriend Keith.  We didn’t stay too long and then took Seanna to get some dinner.  Back at the hotel room, Dottie decorated the cake we bought with some Alice in Wonderland figurines and Seanna and I ate ‘happy play’ celebratory cake. 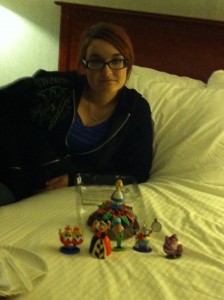 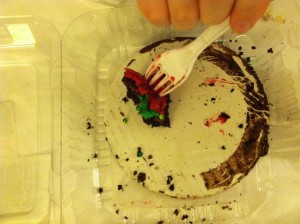 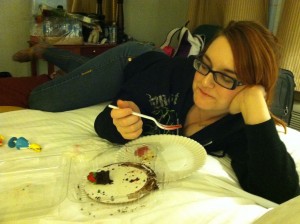 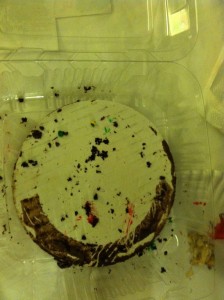 In the morning, we went to breakfast and got our goodbye hugs.  It was soon after that we had to drop Seanna off and head back to the airport to make the return flight home. 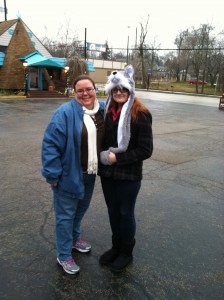 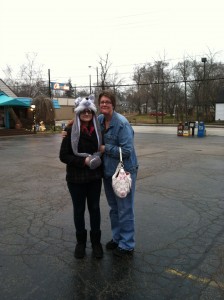 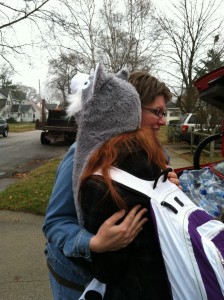 Once we arrived back at the Mesa airport, Ellie and Rosie were thrilled to see the presents their Aunt got them.  A giraffe for Ellie and a penguin for Rosie. 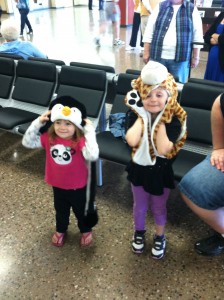 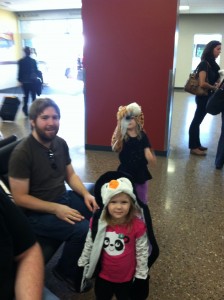