The family went to church at 1pm on Christmas Eve.  Granny was getting last minute things done but Chris and Dottie came with us.  Rosie refused to sing Christmas songs with me so I’m going to bug her next year and see if she will be more agreeable.  Both the kids have been eating candy nonstop for days so they are all out of sorts.

We went home after church to make refried beans and pack up.  Christmas Eve was at Chris and Dottie’s new rental this year. We fed and walked the dog because she was staying home and then got over there around 4:30pm.  My aunt Sandy was already there and Ashleigh showed up soon after.

About 5:30 we ate dinner.  Maurice has been dying for Mexican food Christmas so that’s what we did and it was delicious.  Queso, enchilada casserole, red beef, tostadas…

After dinner the kids only wanted to talk about opening presents.  I had a huge box under the tree for them and they wanted it first.  It was rolling duffel bag luggage for Girl Scout camp and DEFCON.  A new bag for each of them.  They were visibly disappointed and it was hilarious.  They couldn’t even fake it. 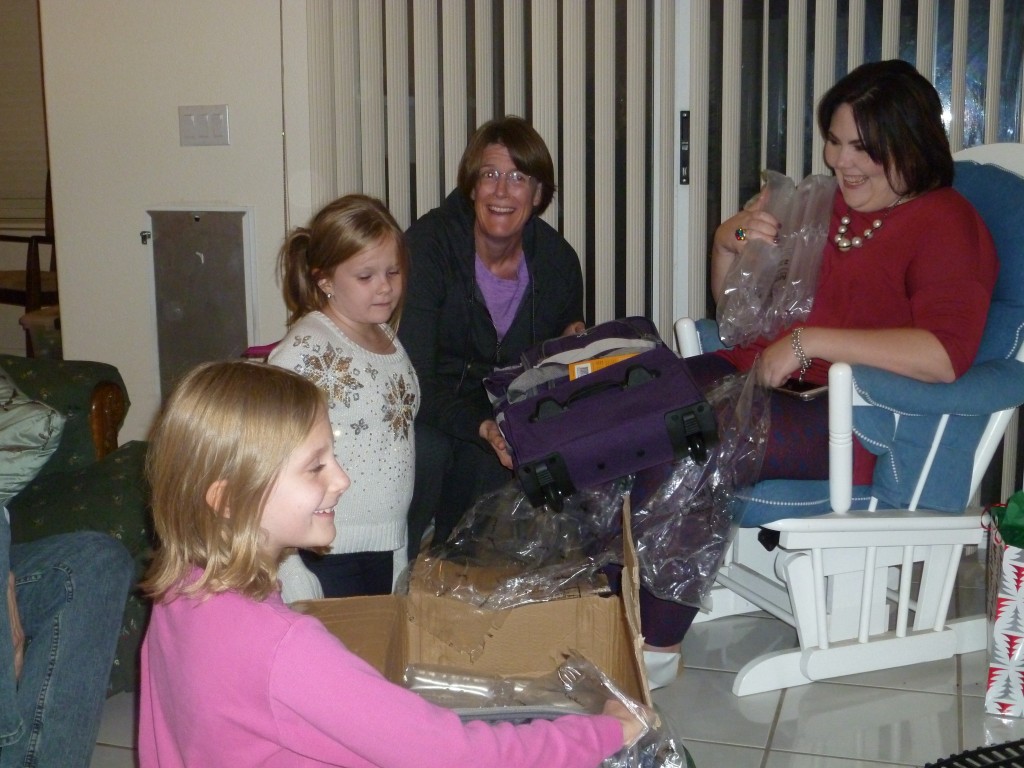 Then they got Legos from Granny, sewing craft supplies from us, toys and jewelry from Aunt Sandy and Ashleigh…

This hat and glove set for Ellie was a present from Rosie. 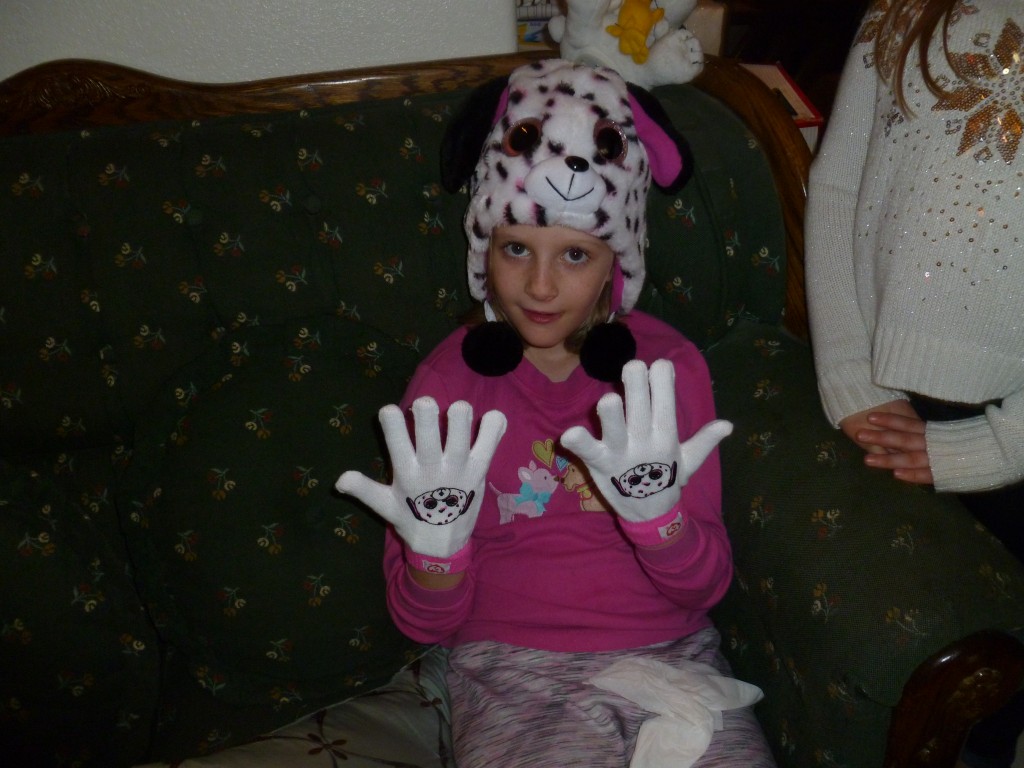 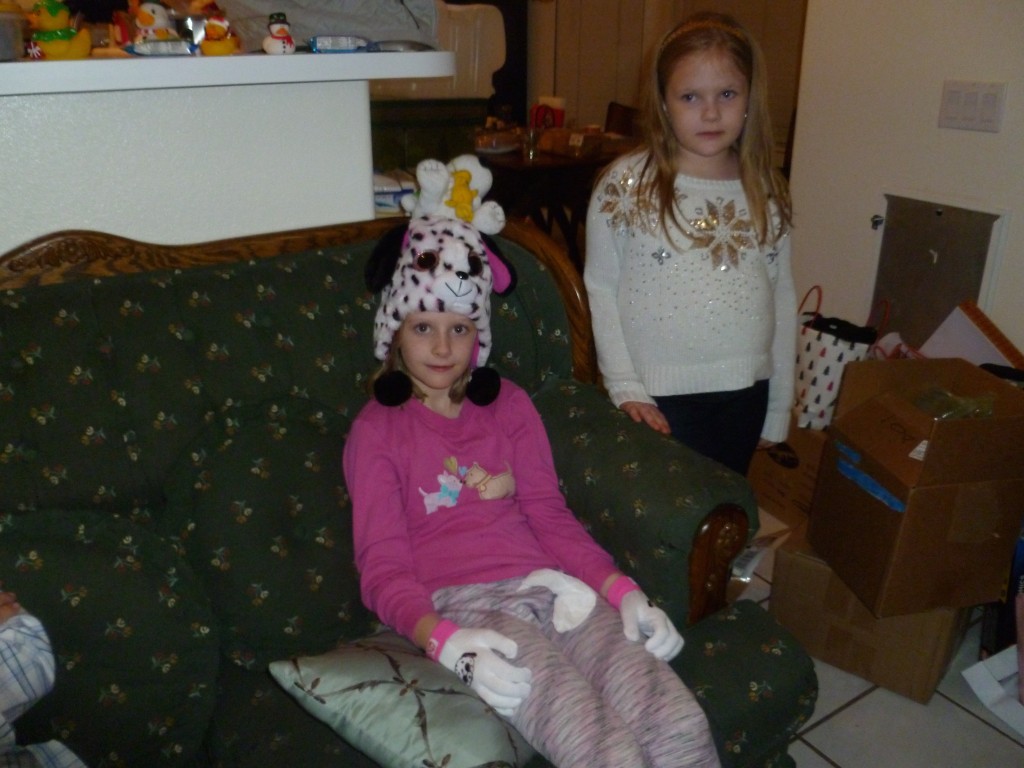 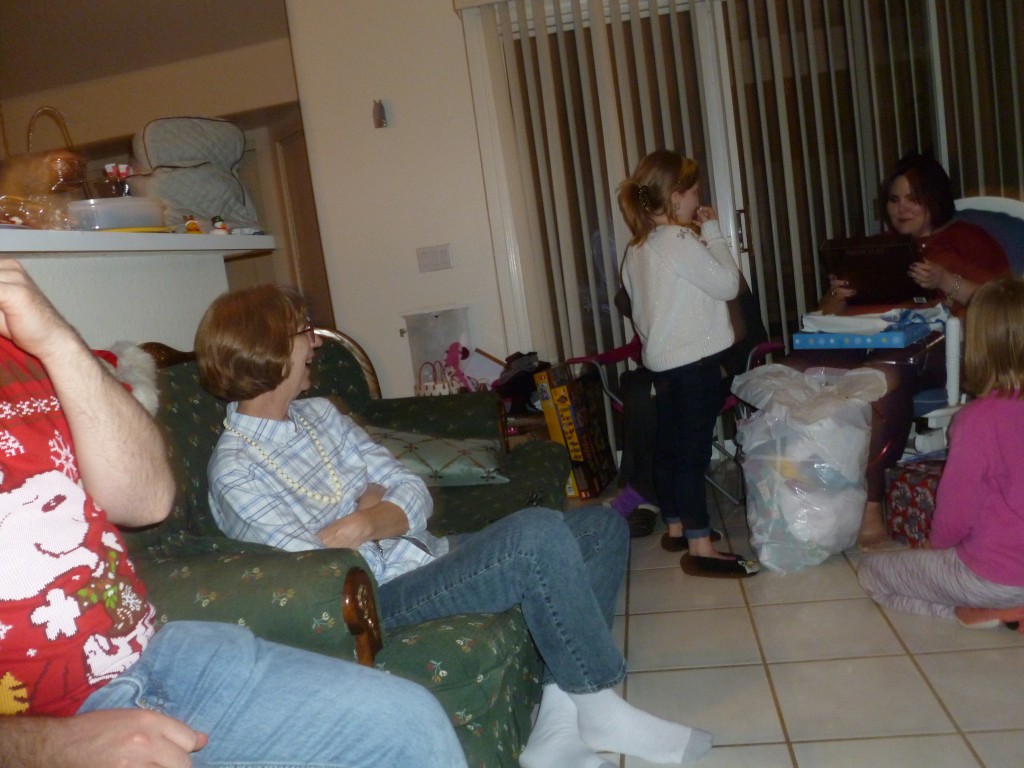 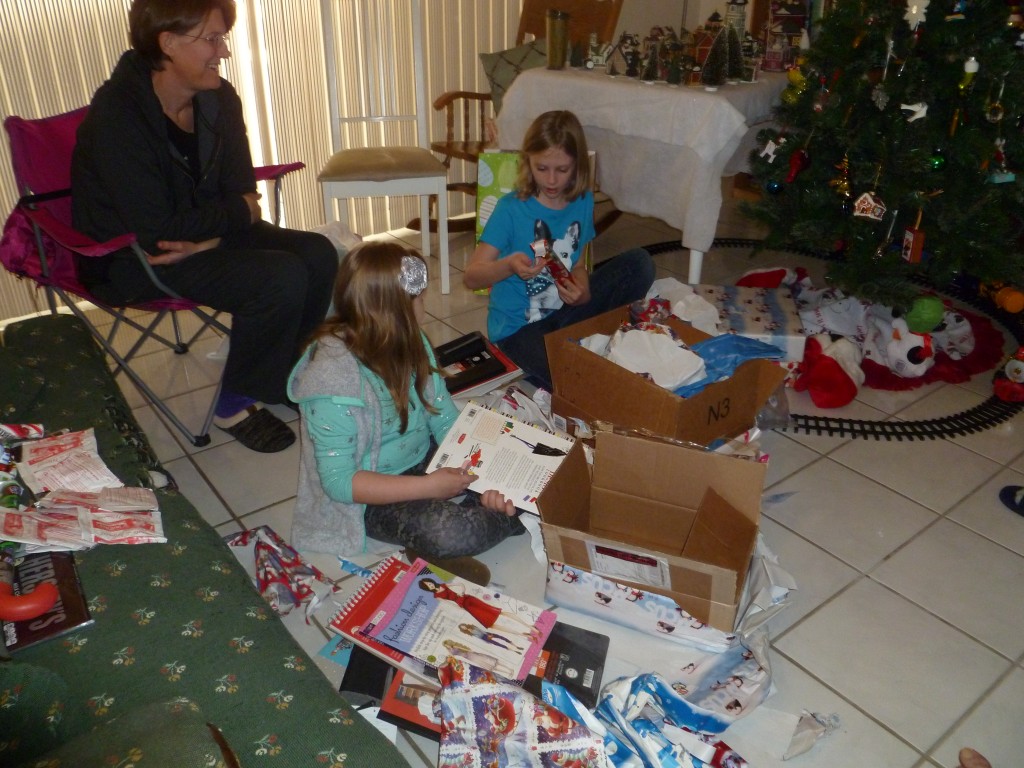 Chris and Dottie had this hilarious package wrapped for them and they had to wait to open it.  They kept saying ‘it’s a chocolate covered cricket’ which was driving Ellie nuts. 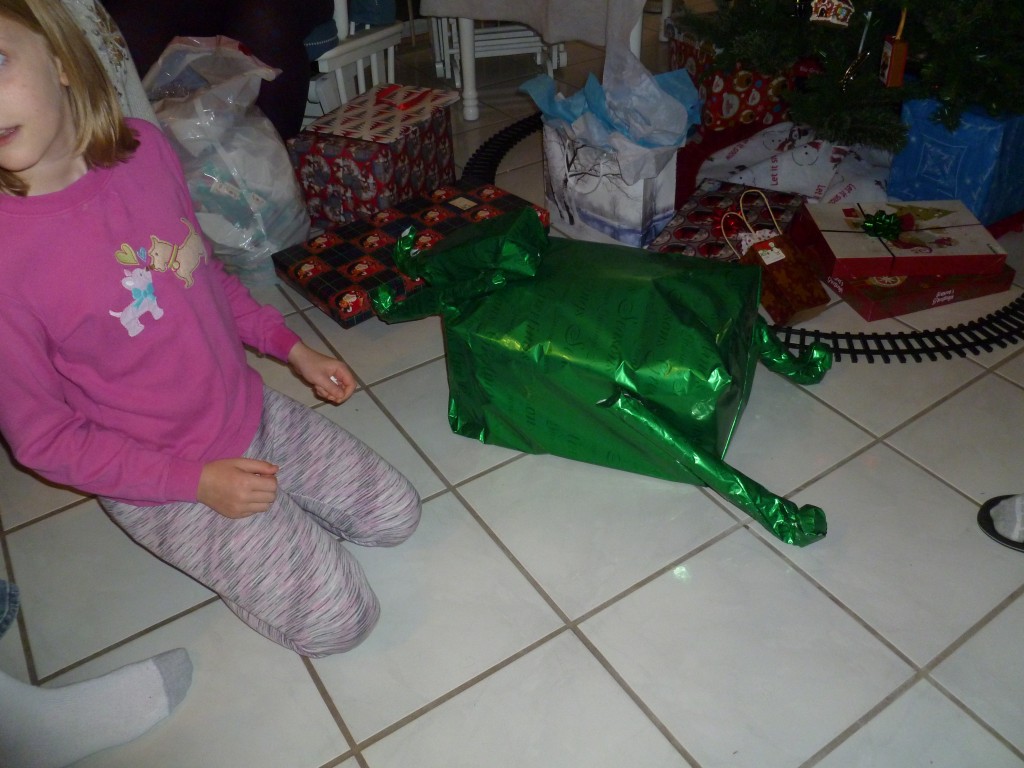 We had dessert and hung out and then we all went home around 9:30pm.

I had had coffee so I was up until 2am or so and I kept Maurice up with me.  We filled the stockings and eventually went to bed.

In the morning, I rolled the luggage around and acted excited and the girls were not having any of it.  They barely cared what was in their stocking.  Even though I let them sleep in, they were way too tired and sorta grumpy.  Ellie told me she was not impressed with the duffel bag and had hoped for toys.

After stockings and helping the dog unwrap her treats and new collar, we went back to Chris and Dottie’s for breakfast and more presents.

They opened the cricket.  It was indeed chocolate covered.  Giant tubes of chocolate for the antennae and taped packages of hot chocolate over the Cricut box.  The girls were a little confused because they don’t know what a cricut is but I was telling Rosie later it’s a machine to cut fabric, vinyl, etc for fashion design or crafts and then she was all about getting it out and trying it out. 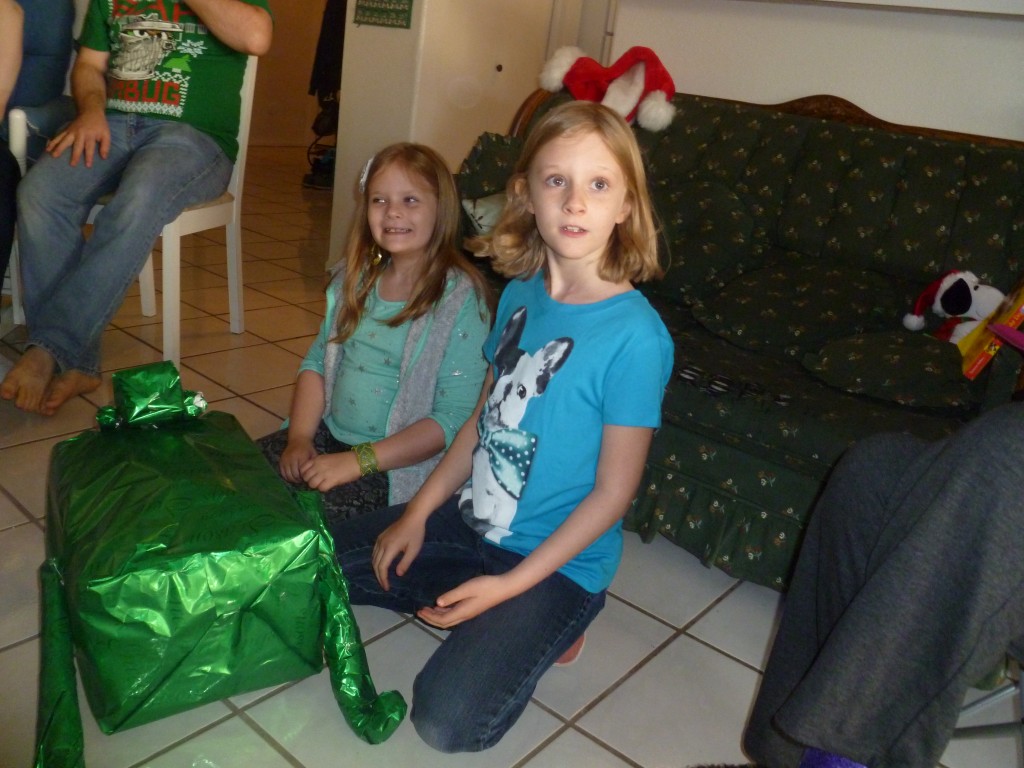 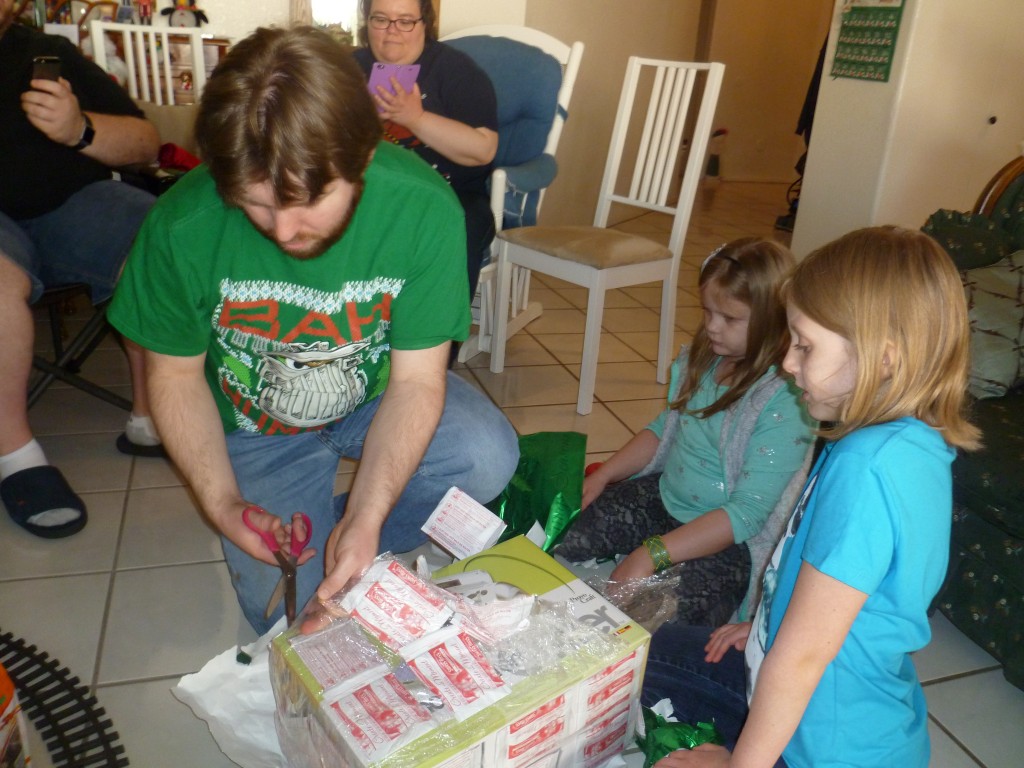 Then they opened the Santa gift from dad.  They were, again, visibly disappointed to pull out their own backpacks.  Matching colors to their recently acquired duffel bags.  They opened the bags and found laptops though and were speechless. 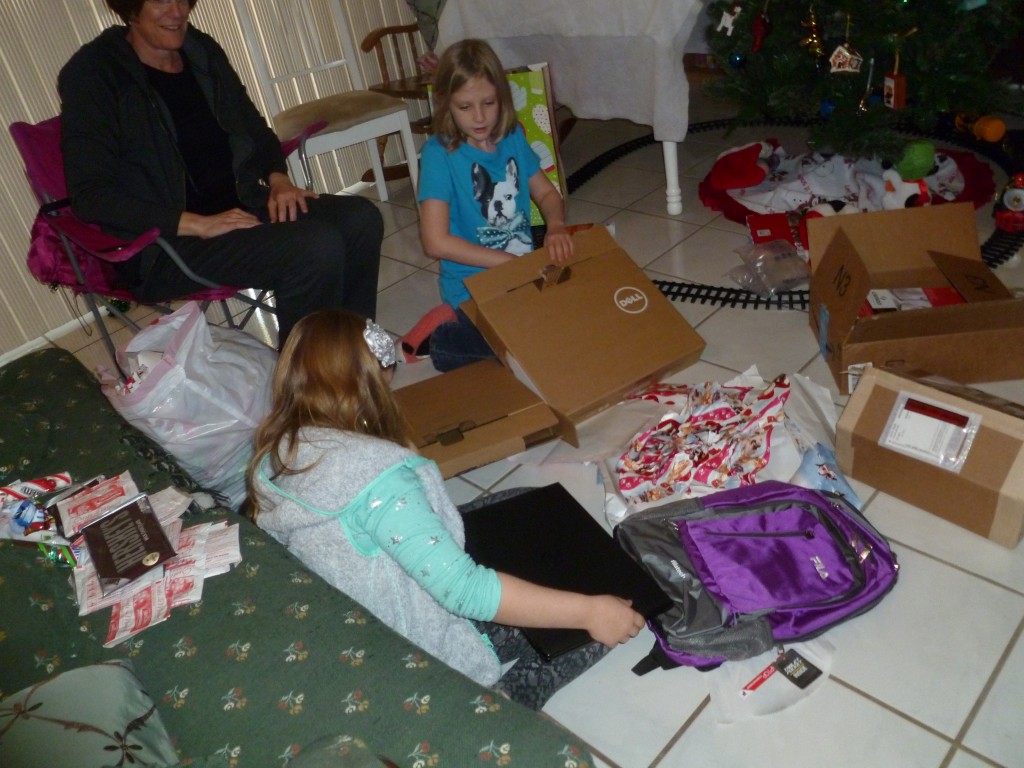 This is all we saw of them after we got home: 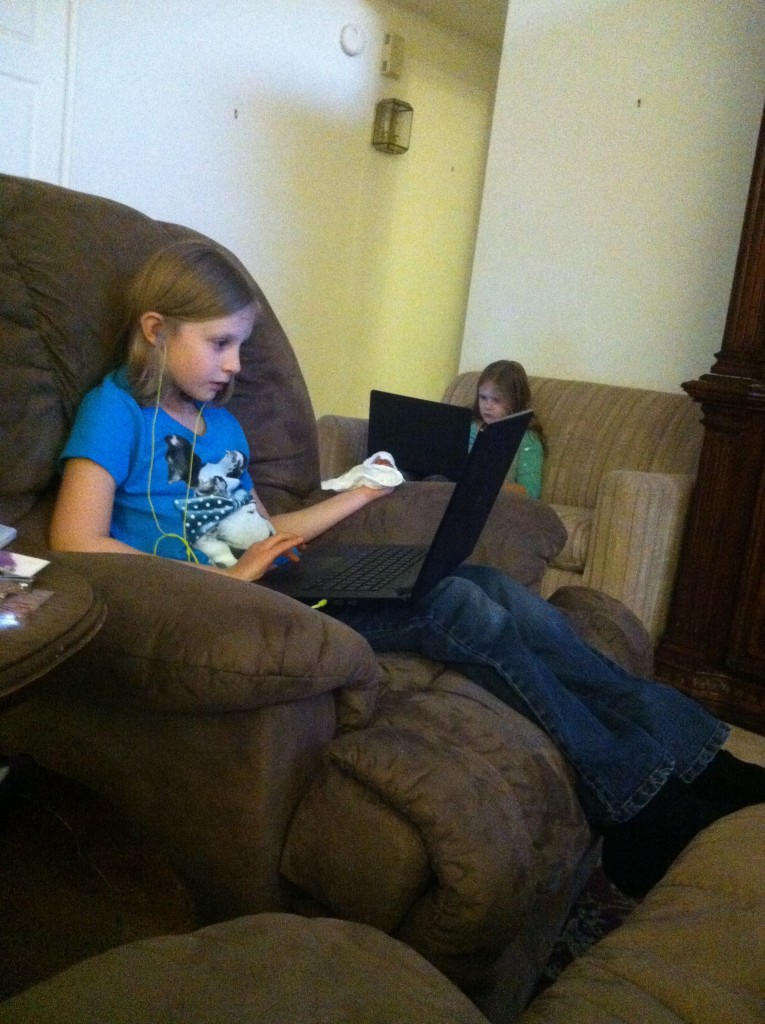 The rest of us made out pretty good.  I got slipper socks, coffee mug, soduko, slippers, gift card, and really just a ton of stuff.  Maurice got gift card, hairbrush, coasters for his drinks…

The girls got Granny a hummingbird feeder and decorative jar (with embroidered lid done by Rosie).  Chris and Dottie got cards with “free housecleaning” coupons, which they found hilarious.

We got Granny and Dottie a picture book from our family urban fishing trip a couple of years ago and Maurice gave Chris an electronic keyboard. 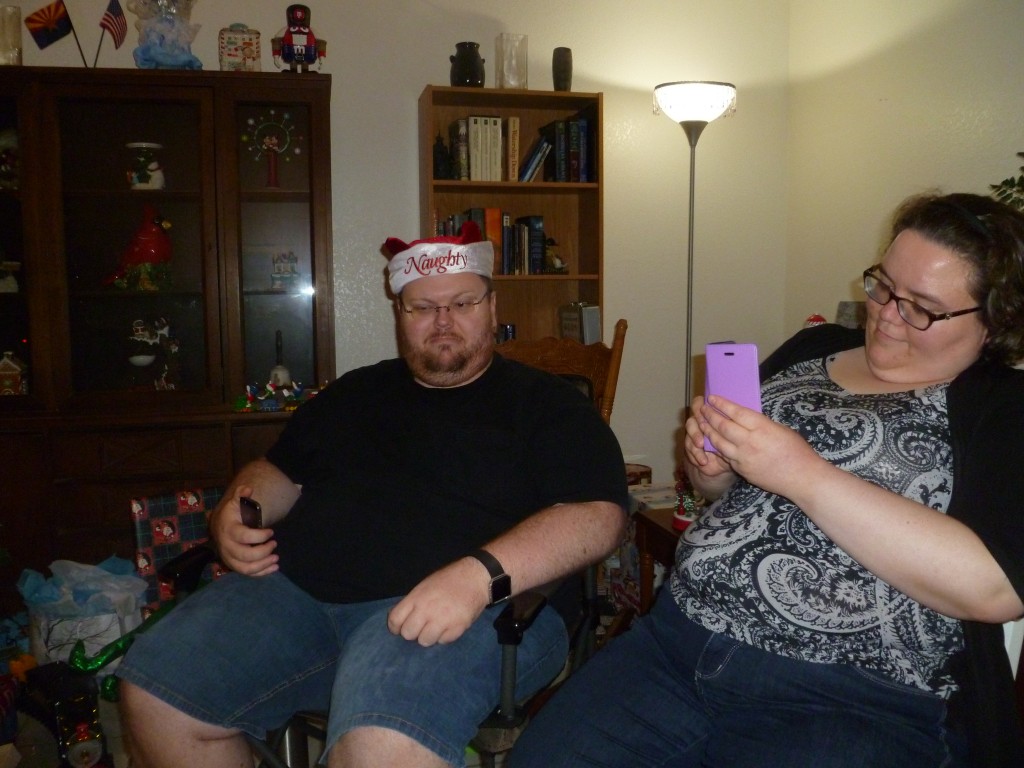 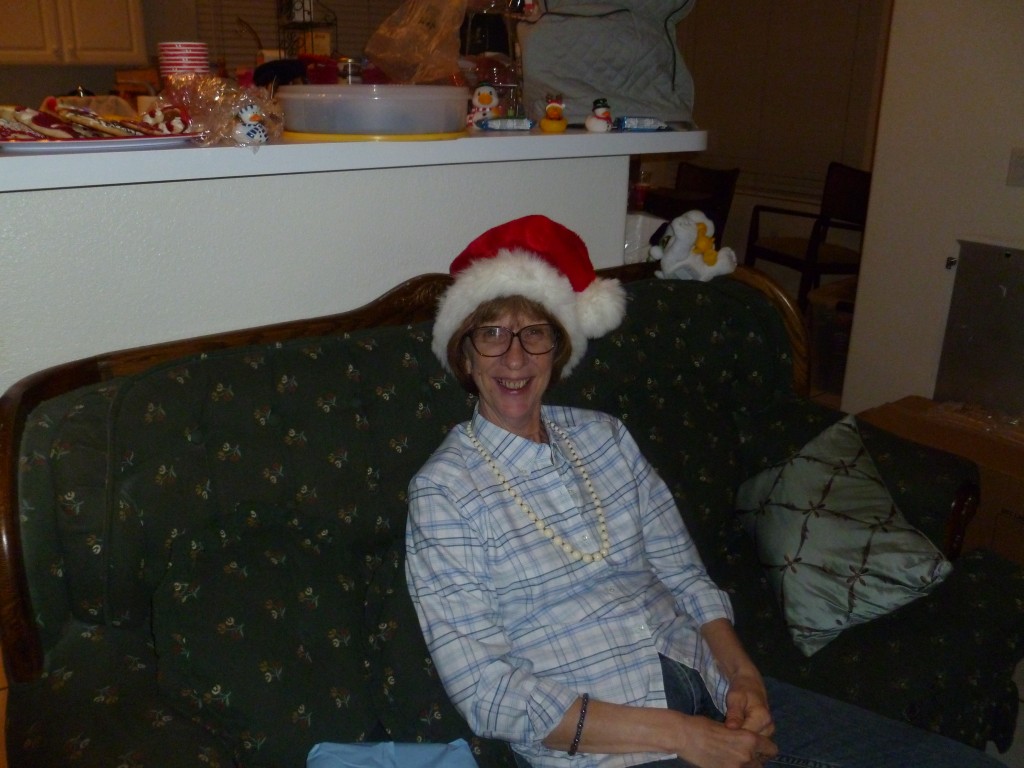 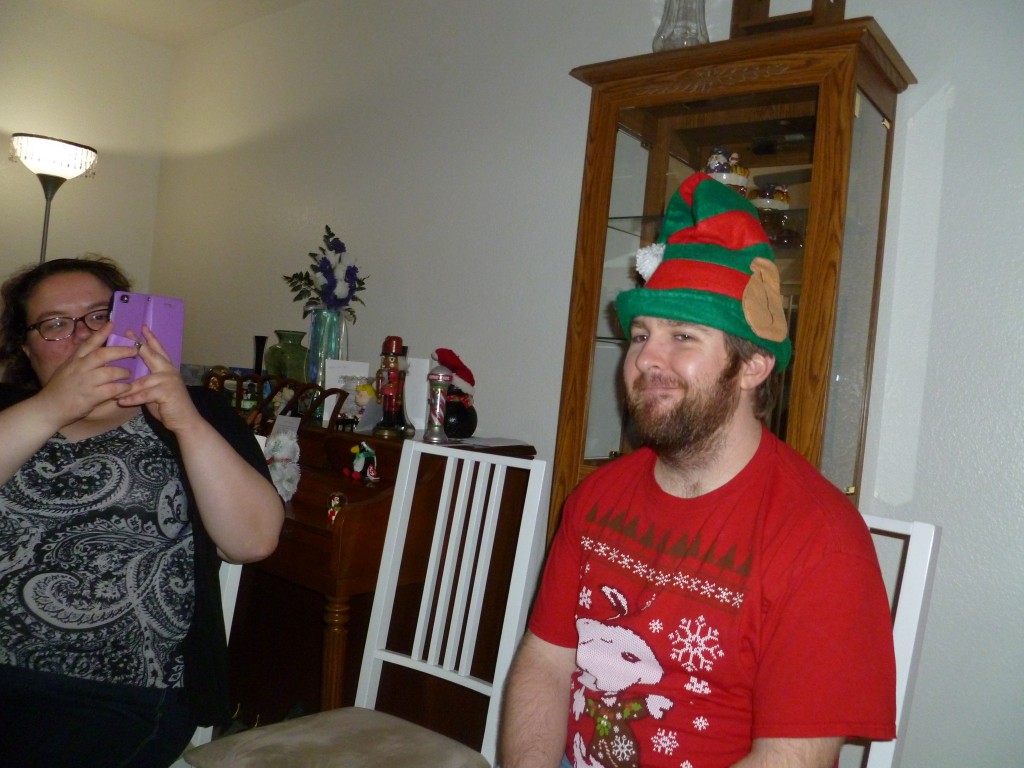 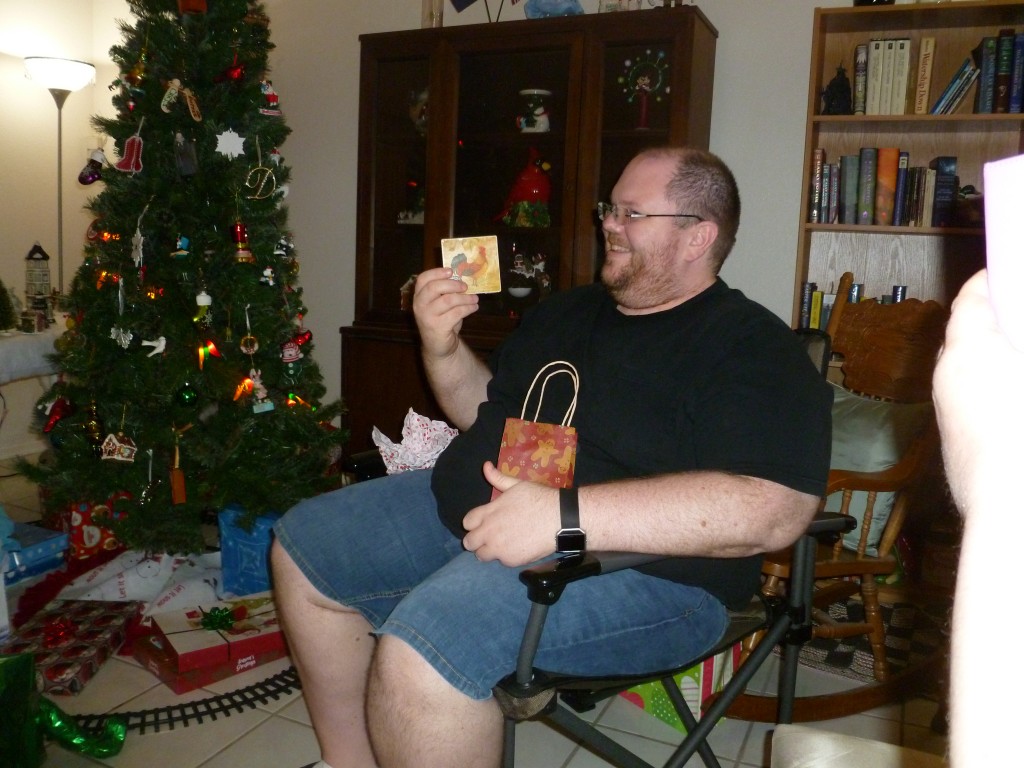 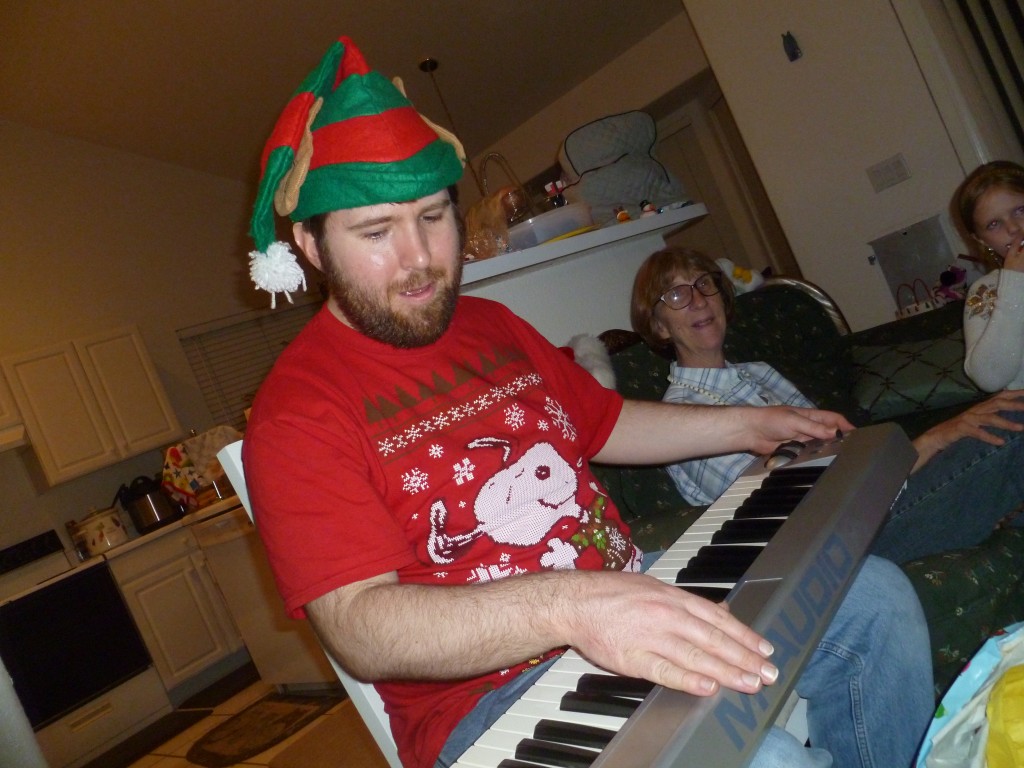 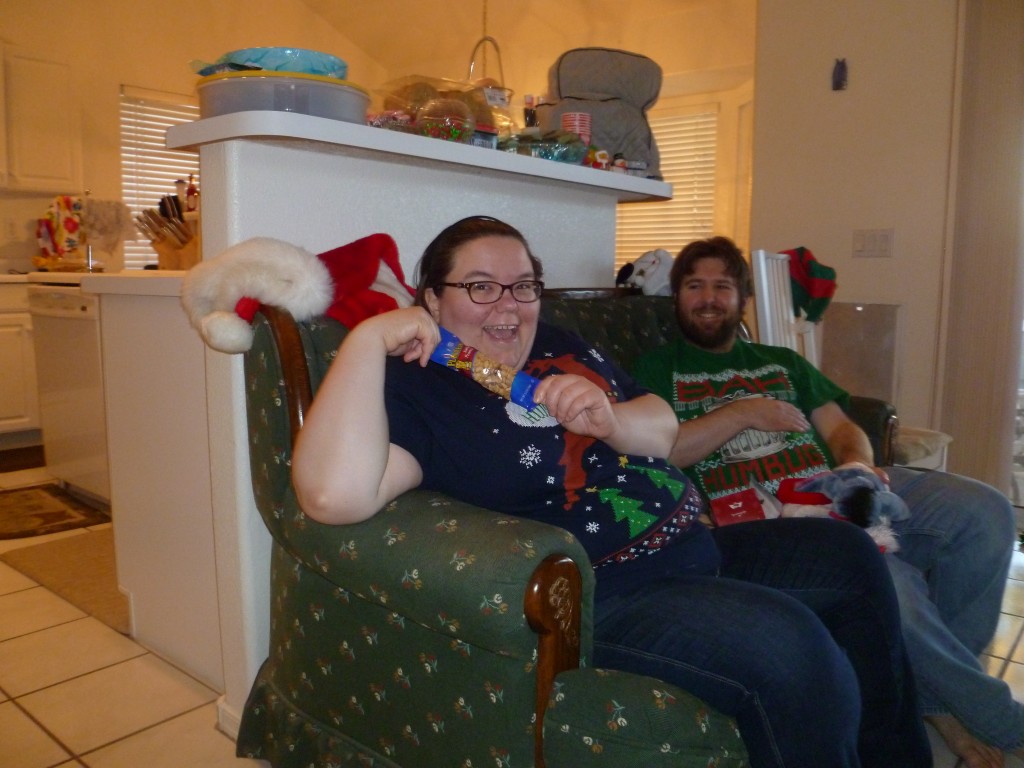 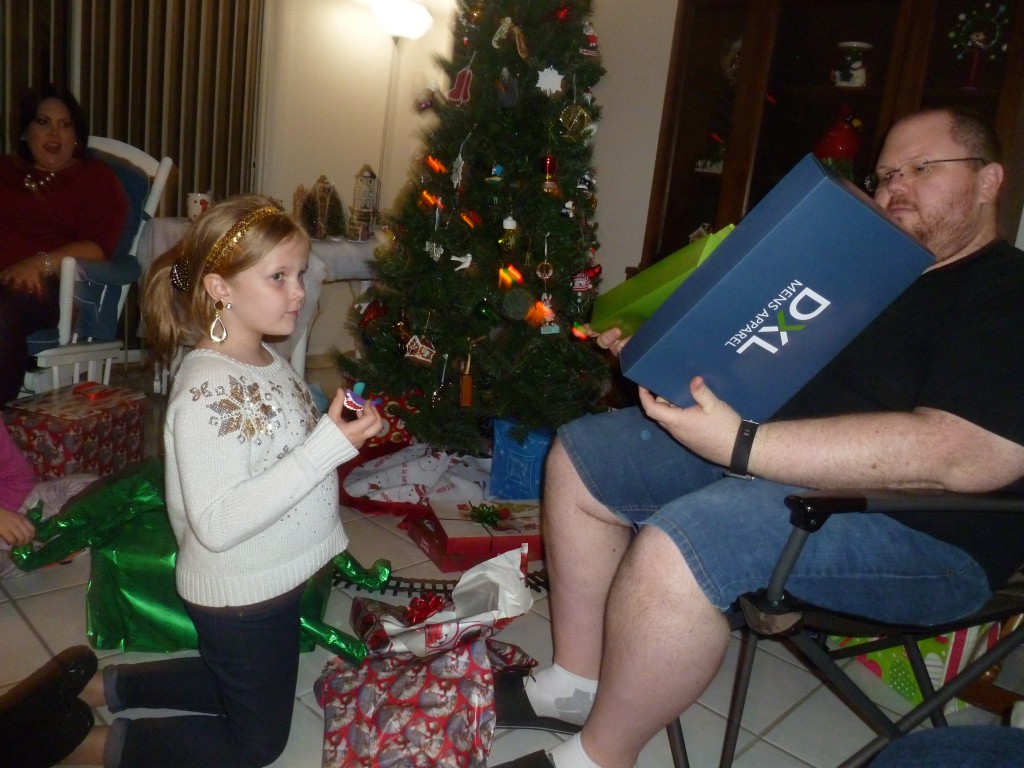 It was all a lot, even though we are all getting better at not going overboard!

Chris and Dottie have a loft where we all gathered and watched Miracle on 34th Street during the afternoon.  Then we came home around 4pm to take care of the dog and get settled for the night.  We watched Die Hard, later ate leftovers for dinner, and the girls played with their new stuff.

I text chatted with Seanna a lot over the weekend.  Sounds like she had a fun Christmas with her ‘baby’s first Christmas’ Eleanor.  I can’t wait to see them next fall heading into next year’s holiday season!