We woke up to room service knocking and had our coffee and muffins while getting dressed.  The view of Ensenada out the window was nothing impressive.

After breakfast we ran into Dottie and Chris and met up with everybody in the library.  We brought paper dolls and jewelry making for the girls and did some activities while Ellie and I watched two tugboats park a huge barge across the port and cranes unloaded all of the shipping boxes.  We were really interested in this process because we had been talking about barges and tugboats a few weeks prior to the trip.

Dottie and Chris already had their swimsuits on so I got the girls ready and we met down at the pool after lunch. The kids went in the hot tub with their aunt and uncle. 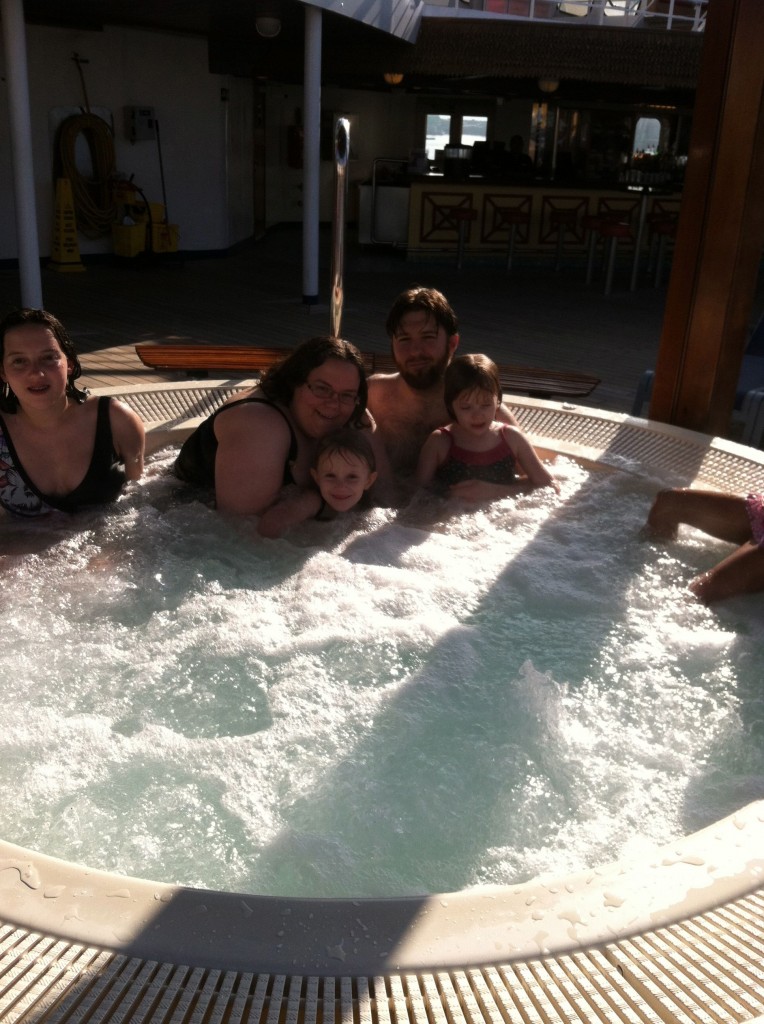 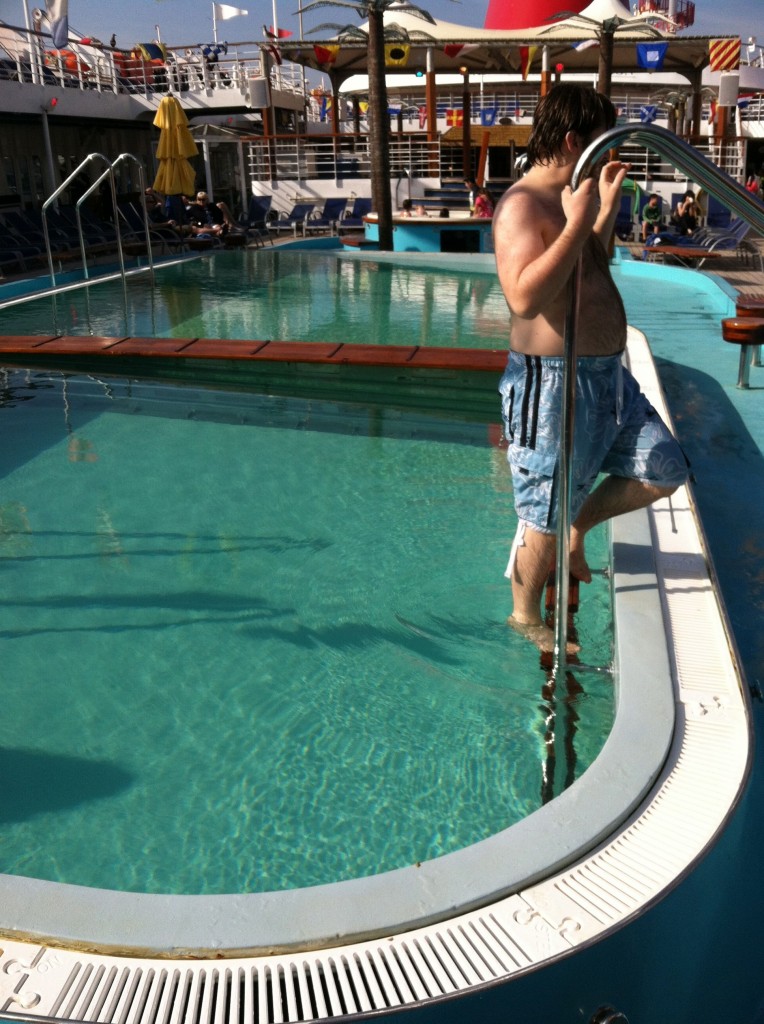 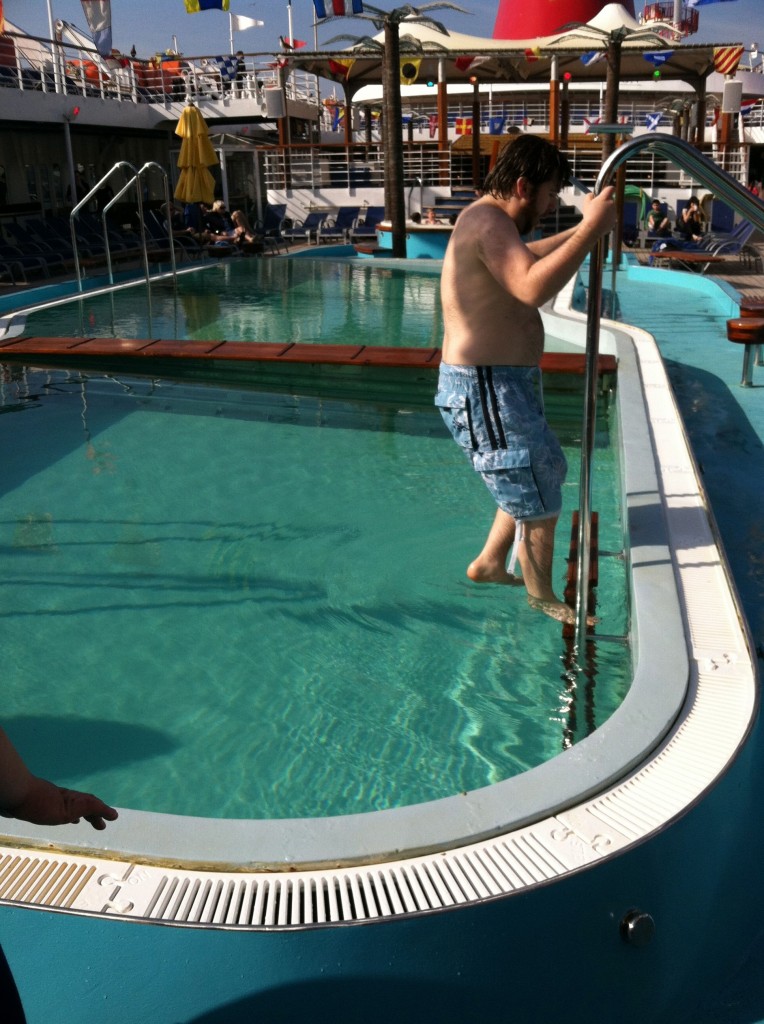 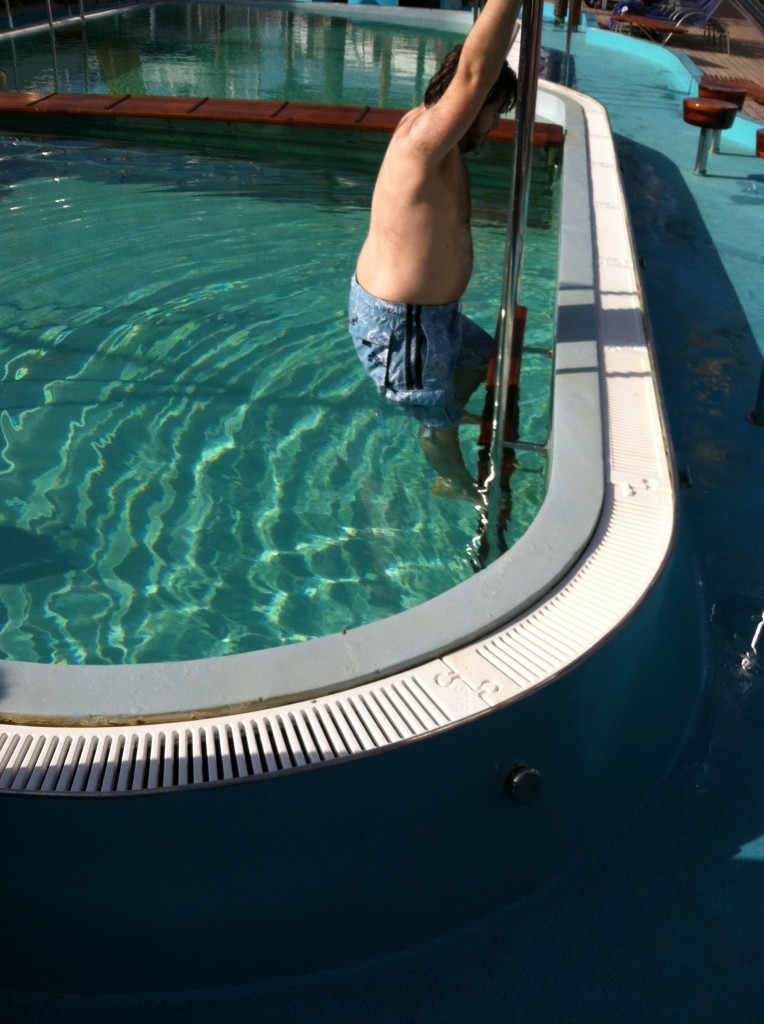 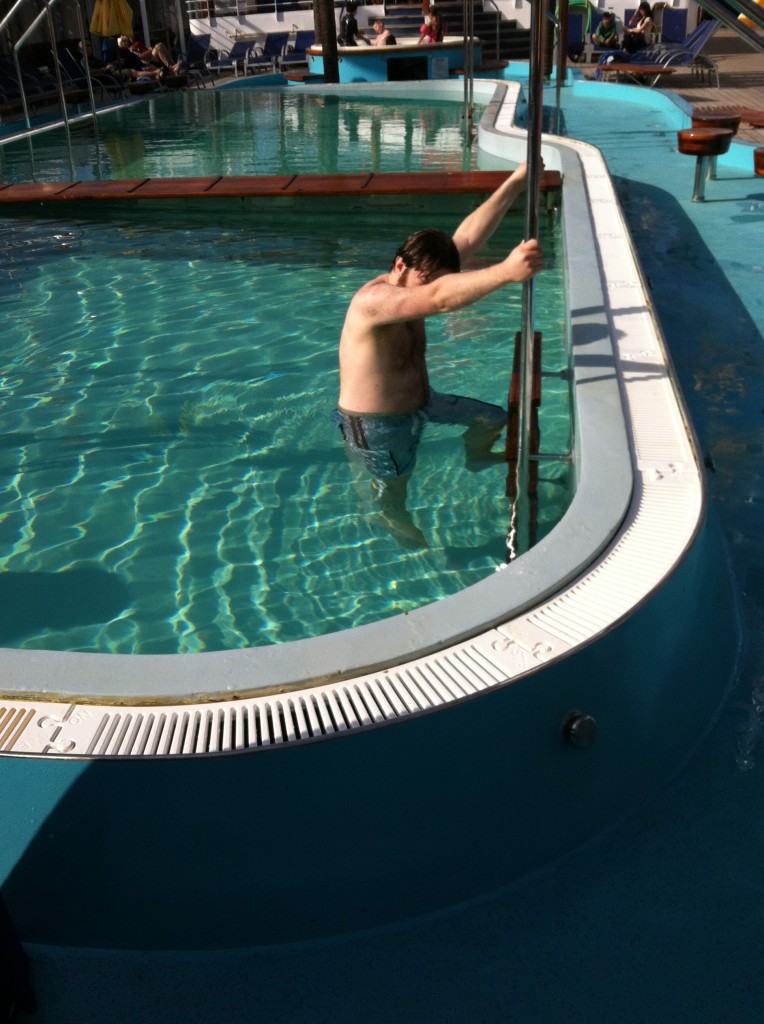 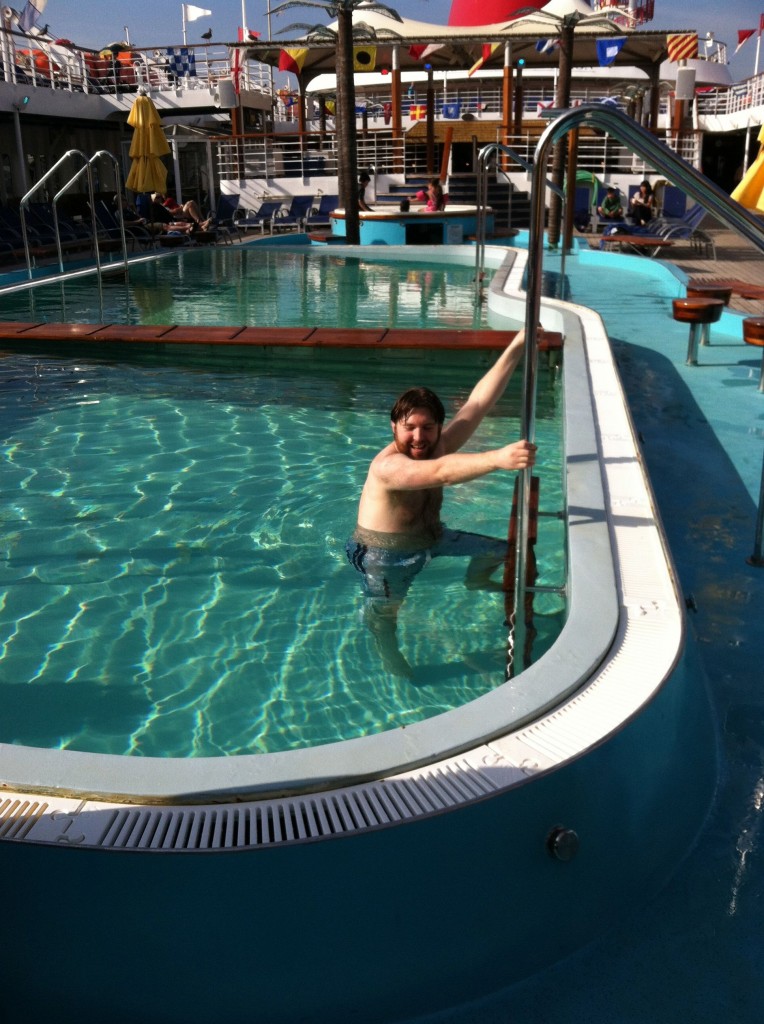 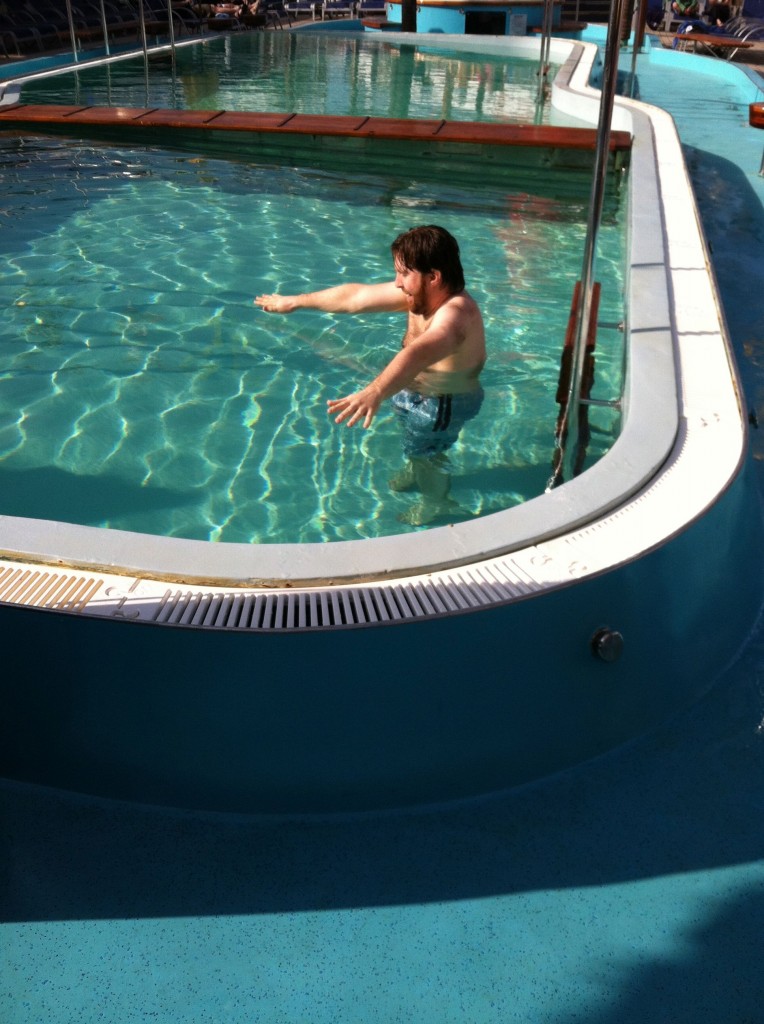 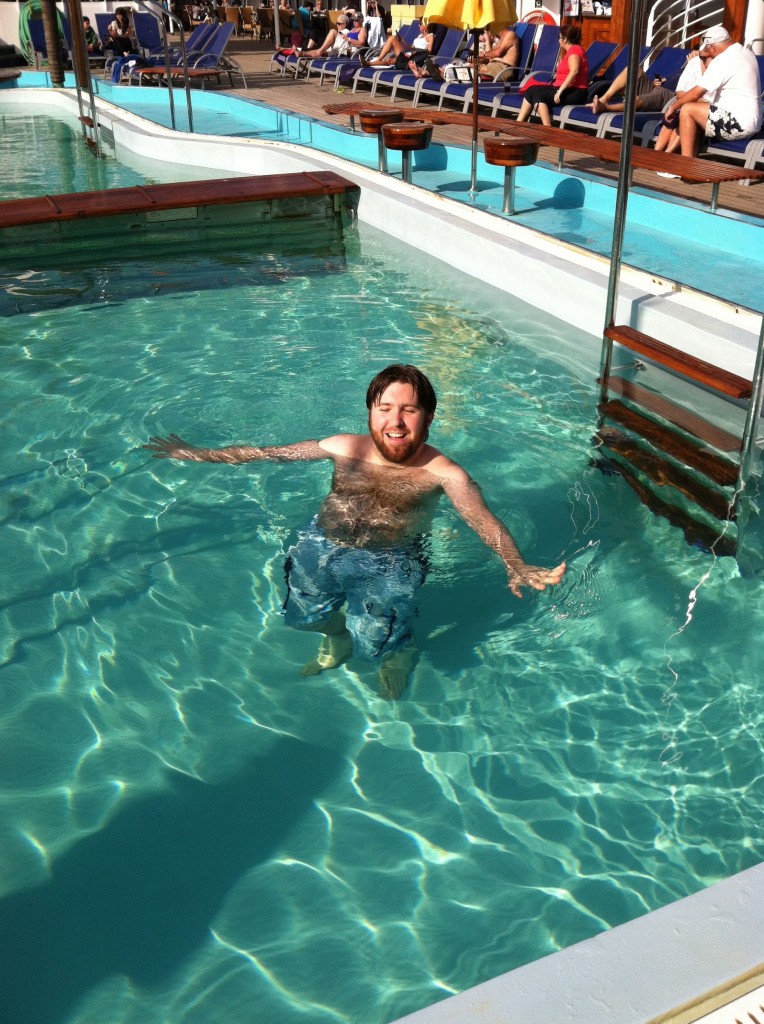 Then we headed up to the water slides and the girls with Chris all went down the slides and had a good time. 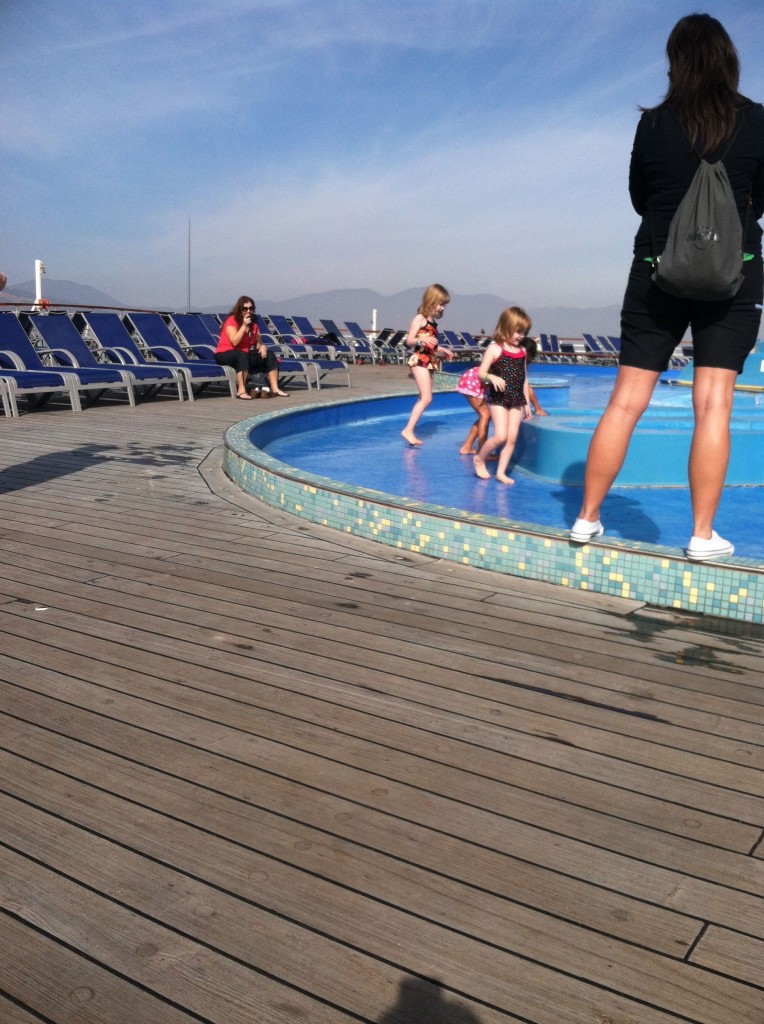 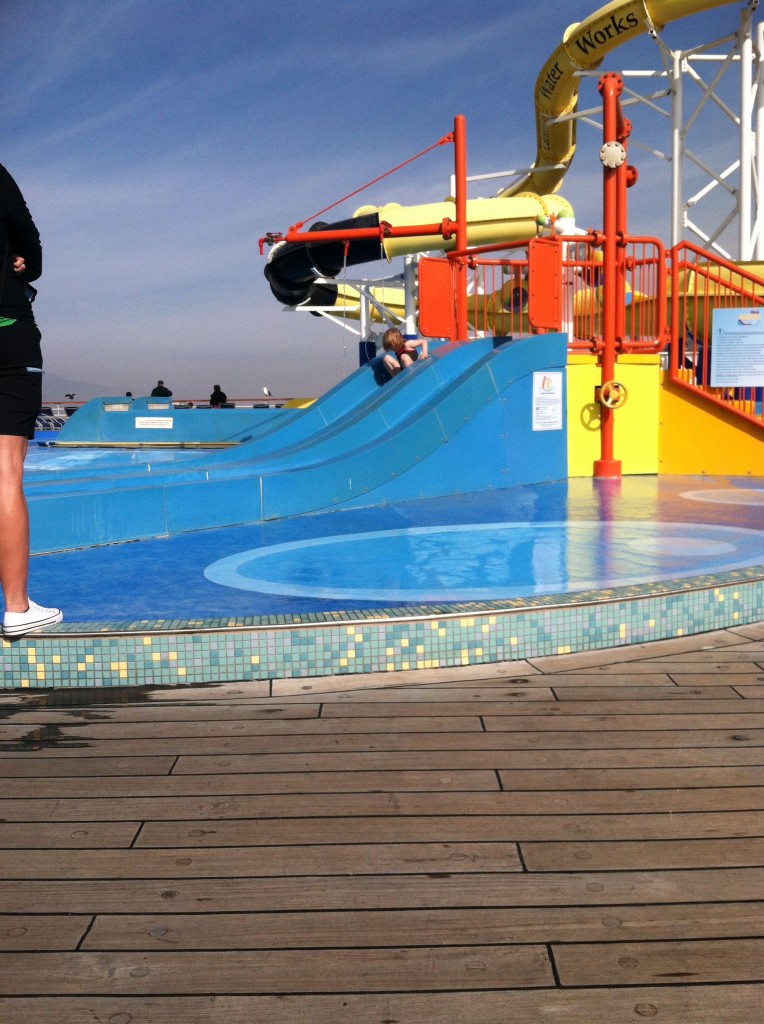 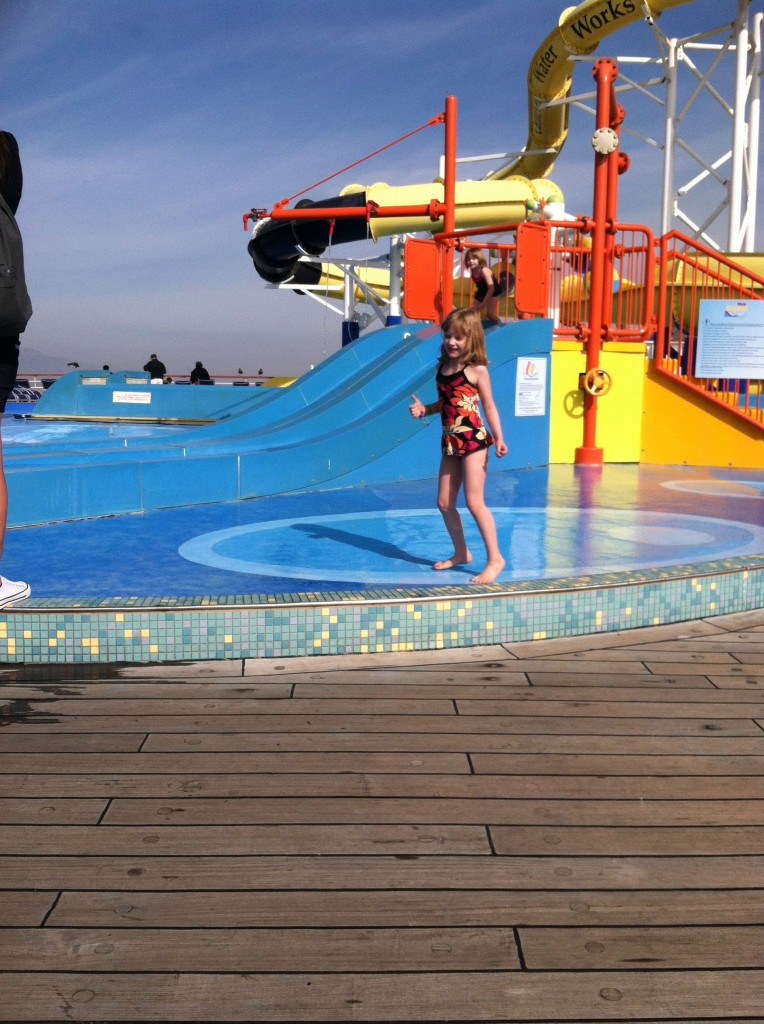 Chris coming down the large tube slide really made the girls laugh: 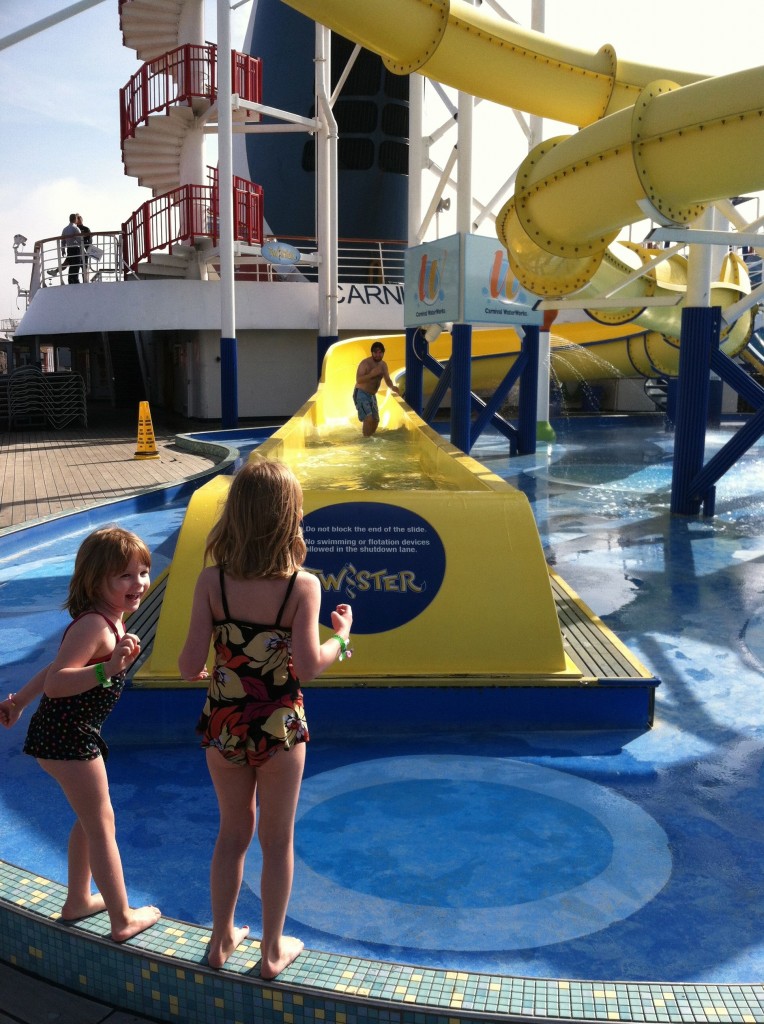 Chris and Ellie both did the larger blue racing slides.  Rosie wasn’t quite tall enough for the height requirement. 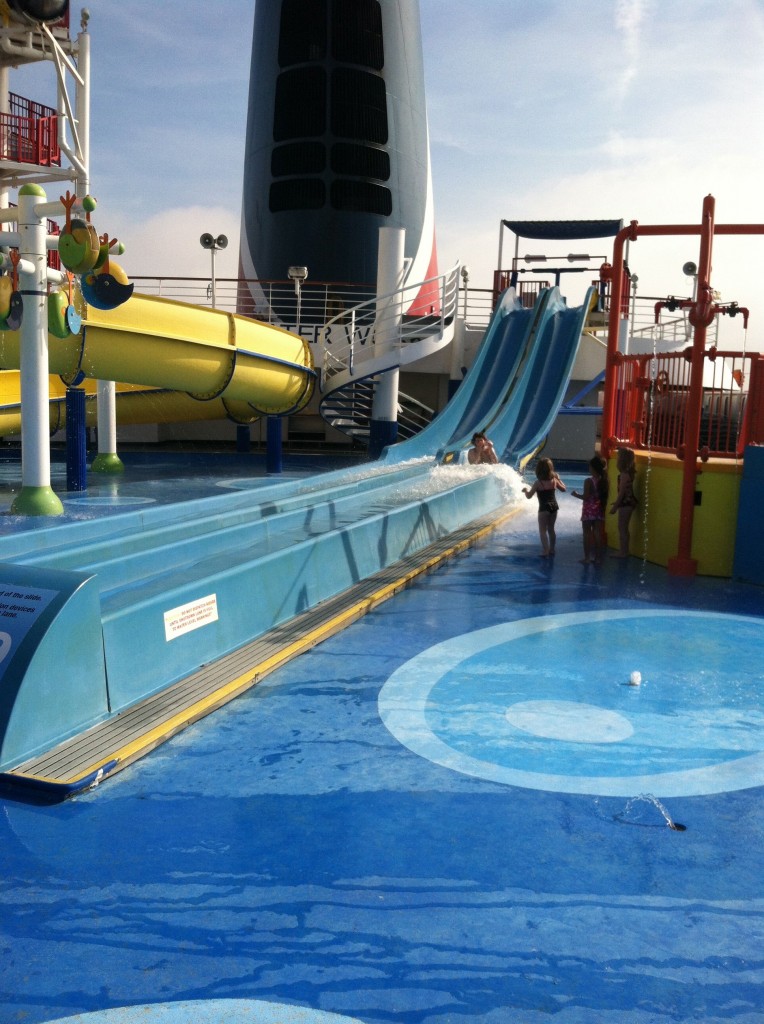 Maurice had gone back to the room to nap by this time.  The kids really needed a nap so I gave them a choice: nap at kids club or nap in the room.  Rosie wanted to nap with dad and Ellie wanted kids club.  I took Rosie to the room and put her down to nap next to dad. We took this picture on the glass elevator in the atrium on the way: 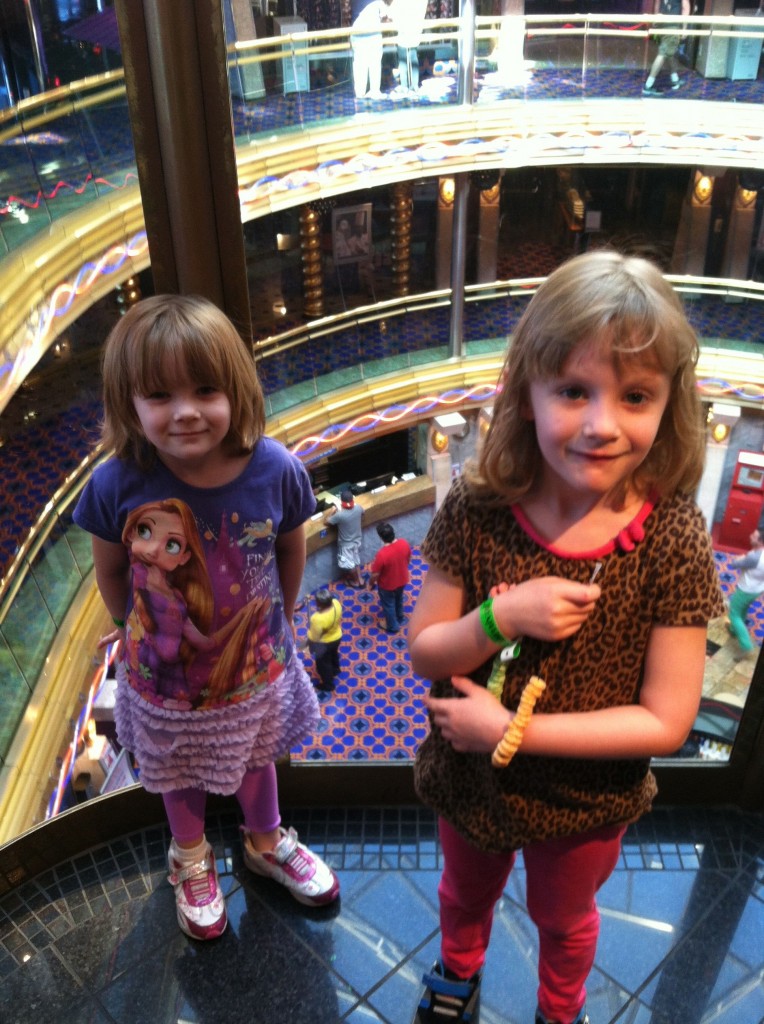 I dropped Ellie off at kids club.  Then I met Ella, Dottie and Chris at the bar on the lido deck next to the pool.  We drank cocktails for a few hours.

I went with Ella to pick up Ellie from kids club on the way to meet everybody for dinner.  Ellie grabbed me when I walked in and had tears in her eyes.  The coordinator said she just woke up.  I guess when she woke up she forgot Rosie wasn’t with her and thought I left her there and Rosie was gone. She was scared. We got back to the room and she hugged Rosie while dad got dressed for dinner.

Here is the group at dinner: 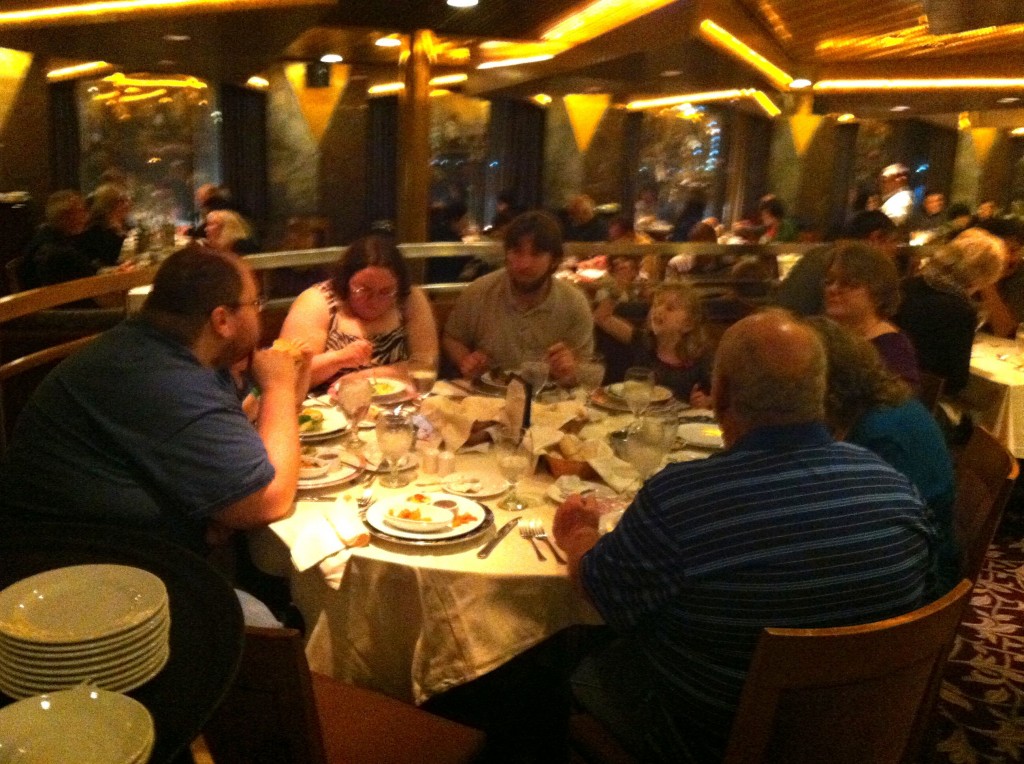 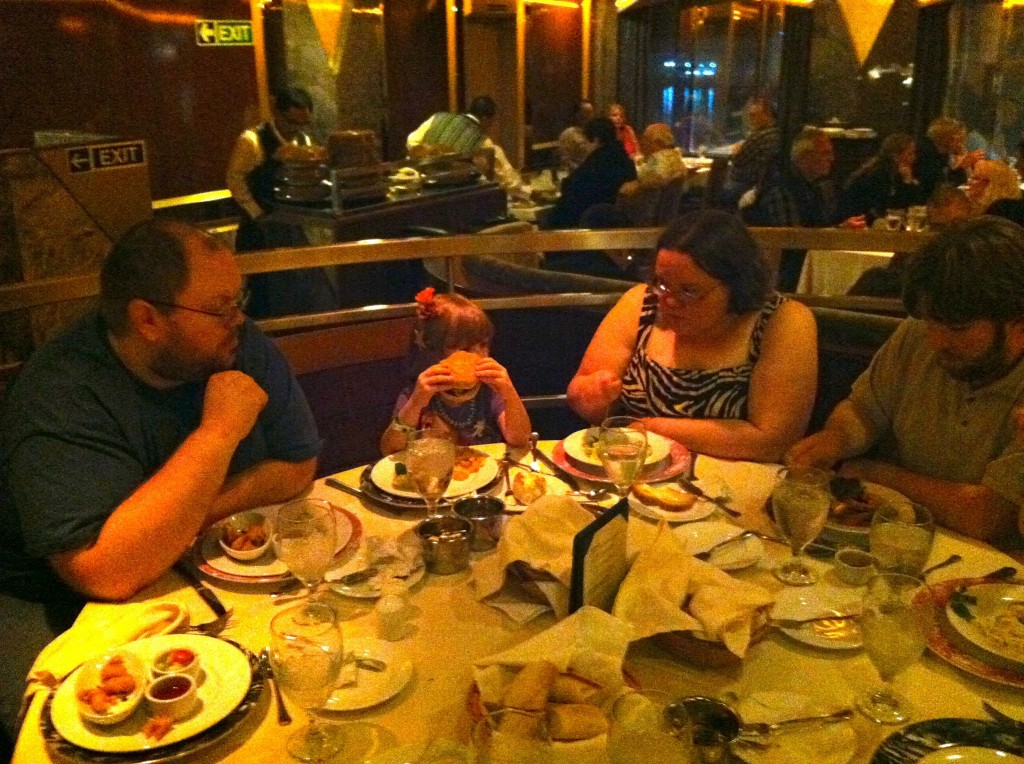 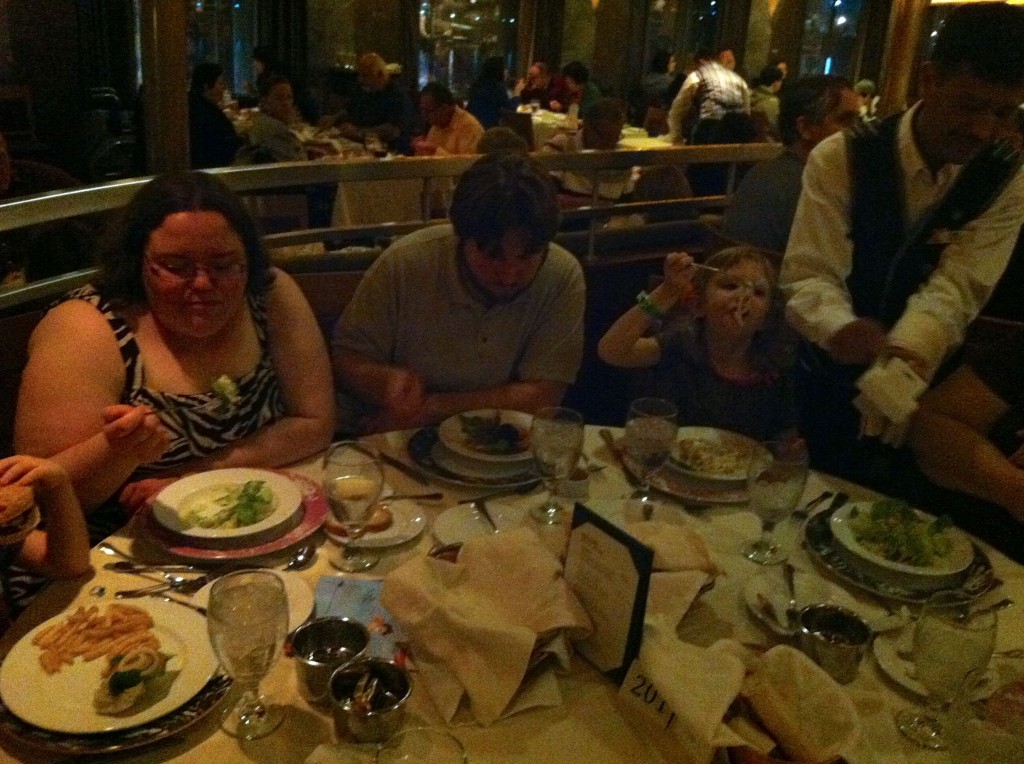 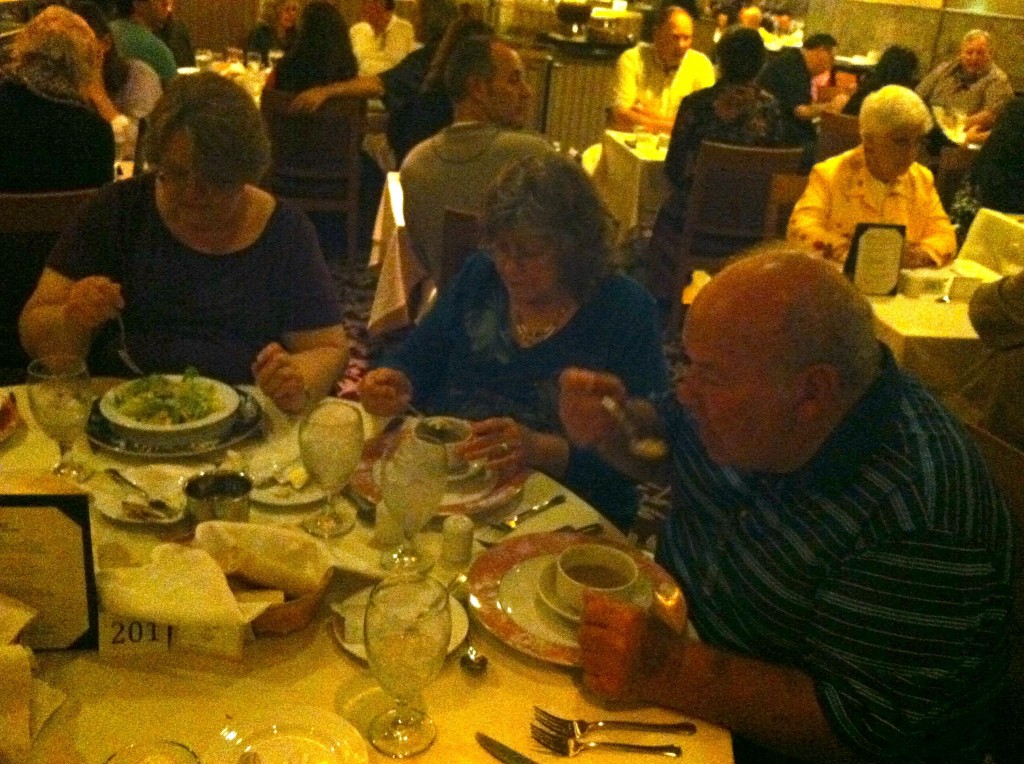 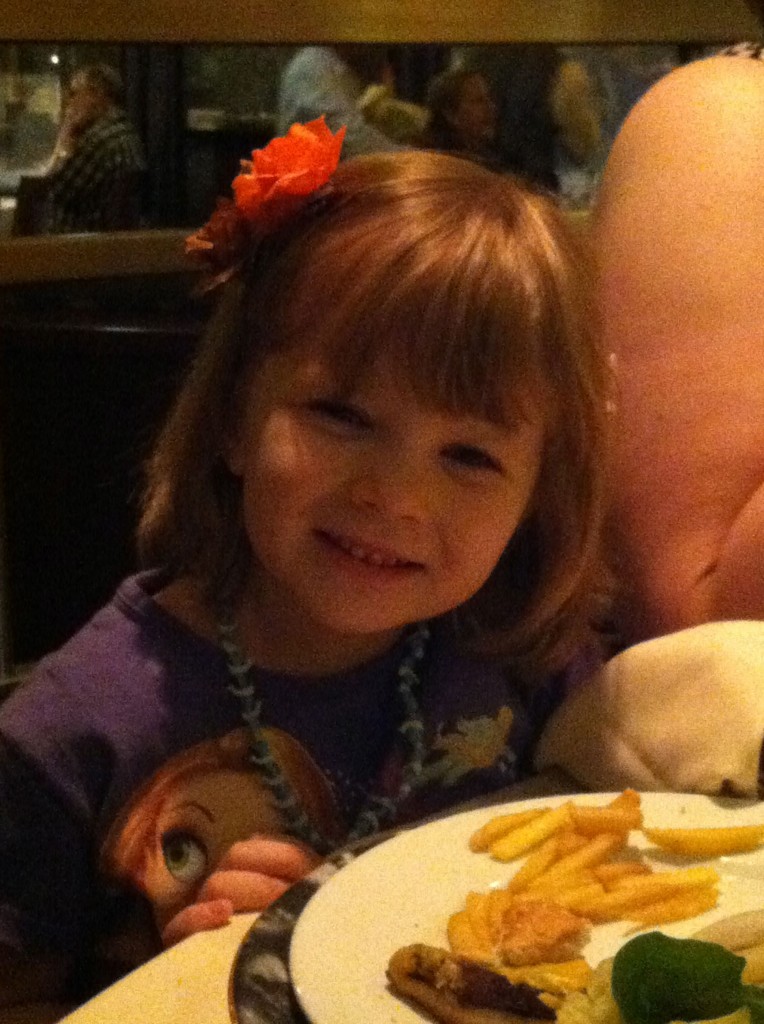 After dinner, the four of us went on a tour of the boat.  Even though it was dark, we went up to the top deck and looked out over the ocean.  Ellie and I had wanted to see the stars from the ocean without any city lights.  It was overcast so we still didn’t have a good view. We walked around the ship and saw the weird towel character by some elevators and the giant chess game on the lido deck. 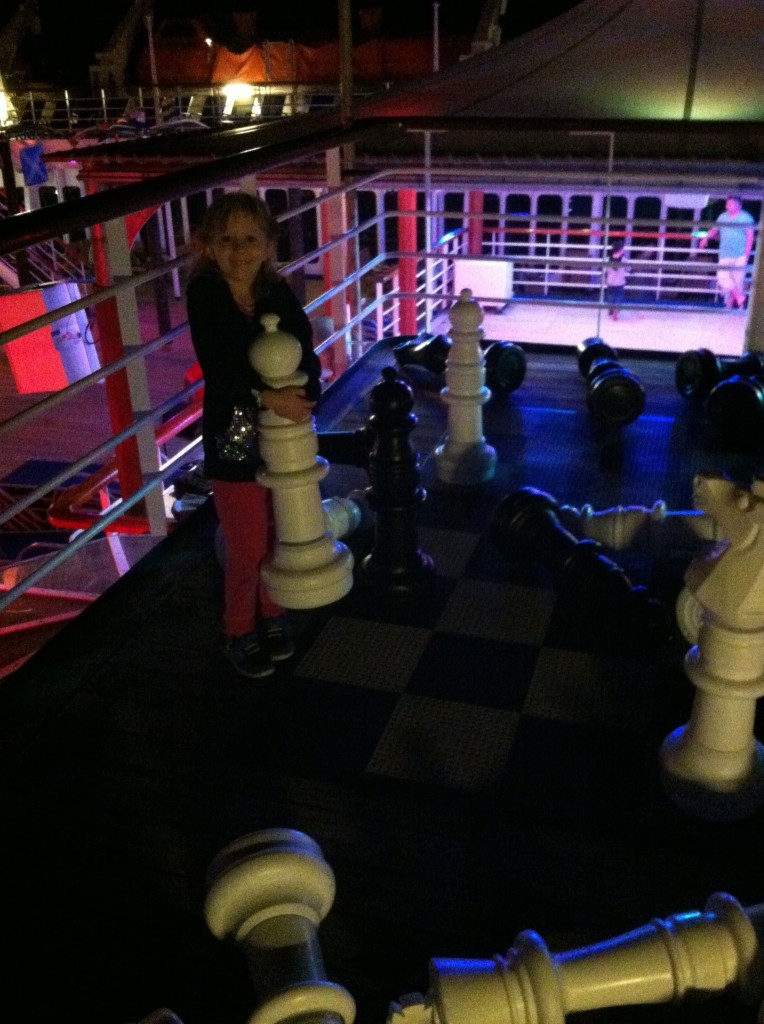 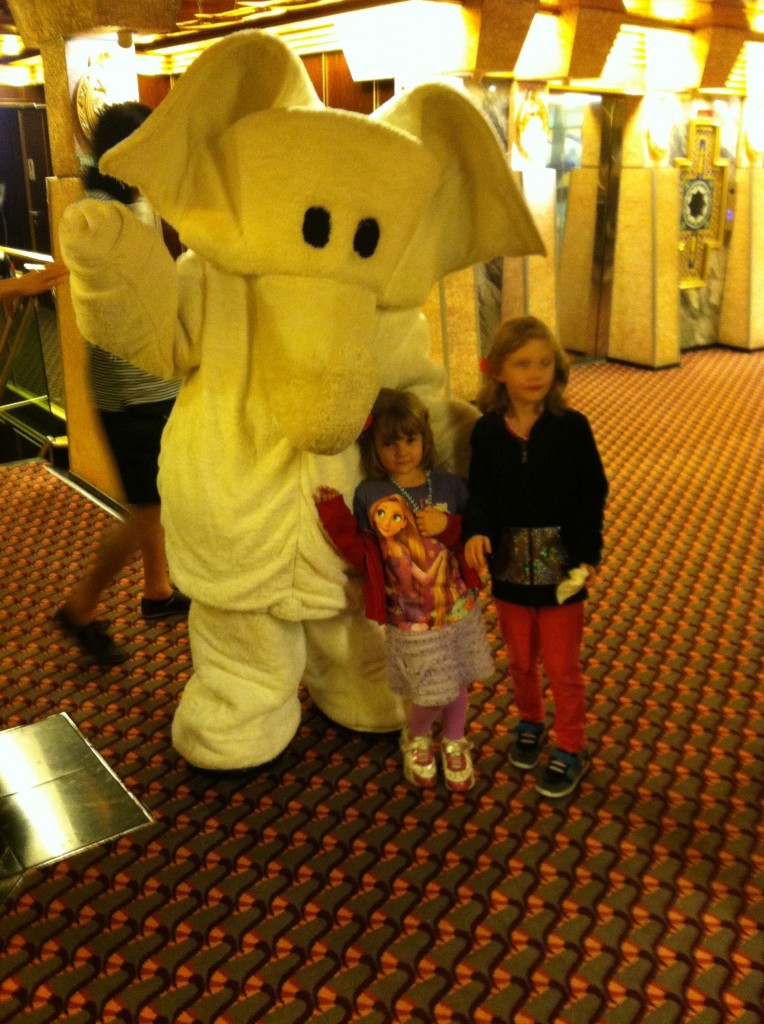 Then we saw they were having a DJ dance party on the lido deck stage.  The kids and I went off to dance while the rest of the family met up with us. 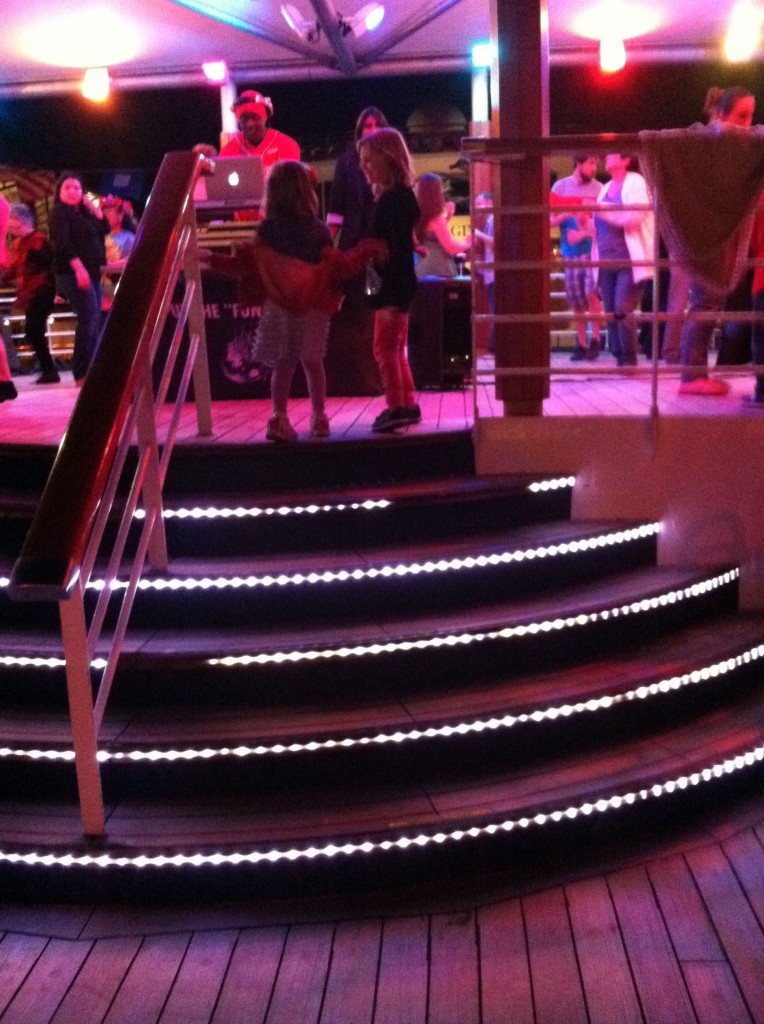 They kicked everyone off the stage and Ellie went to sit by dad. Once they started the dance lessons, Rosie was super excited so we went with Uncle Chris to learn new dance moves. We couldn’t convince Ellie to come with us.  Rosie and I had a blast.  We ended up doing a congo line around the entire deck with Dottie and Ellie joining us.

After all of that, it was bedtime. Here’s the creepy thing we found waiting for us on our bed when we returned to our room. 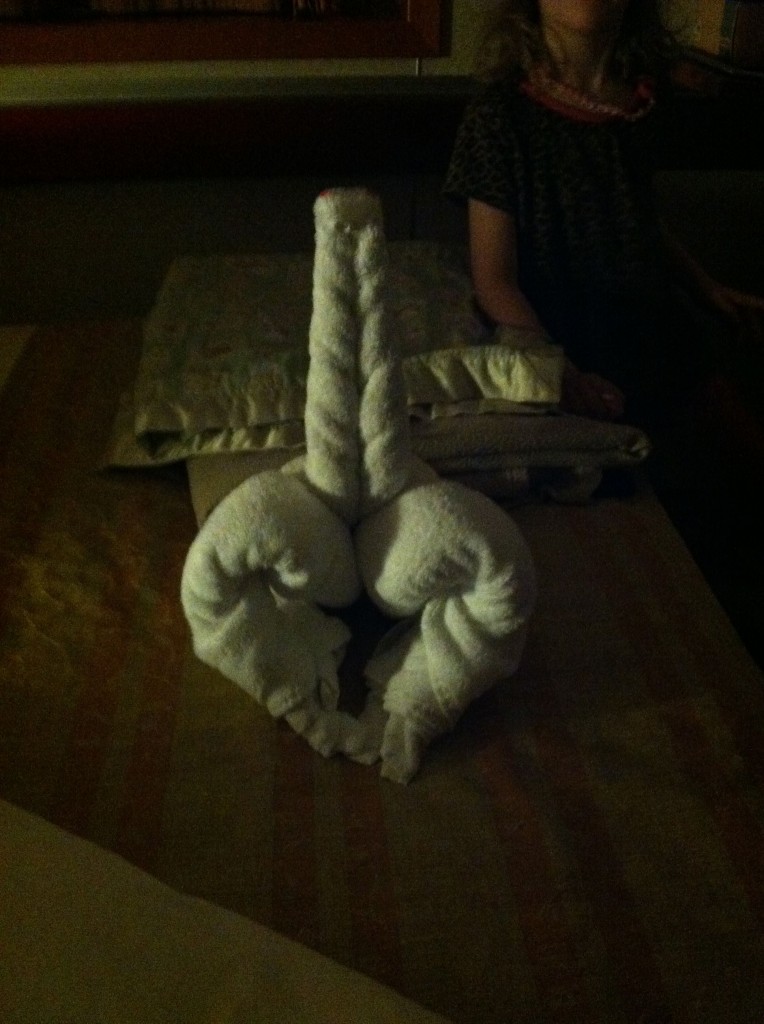 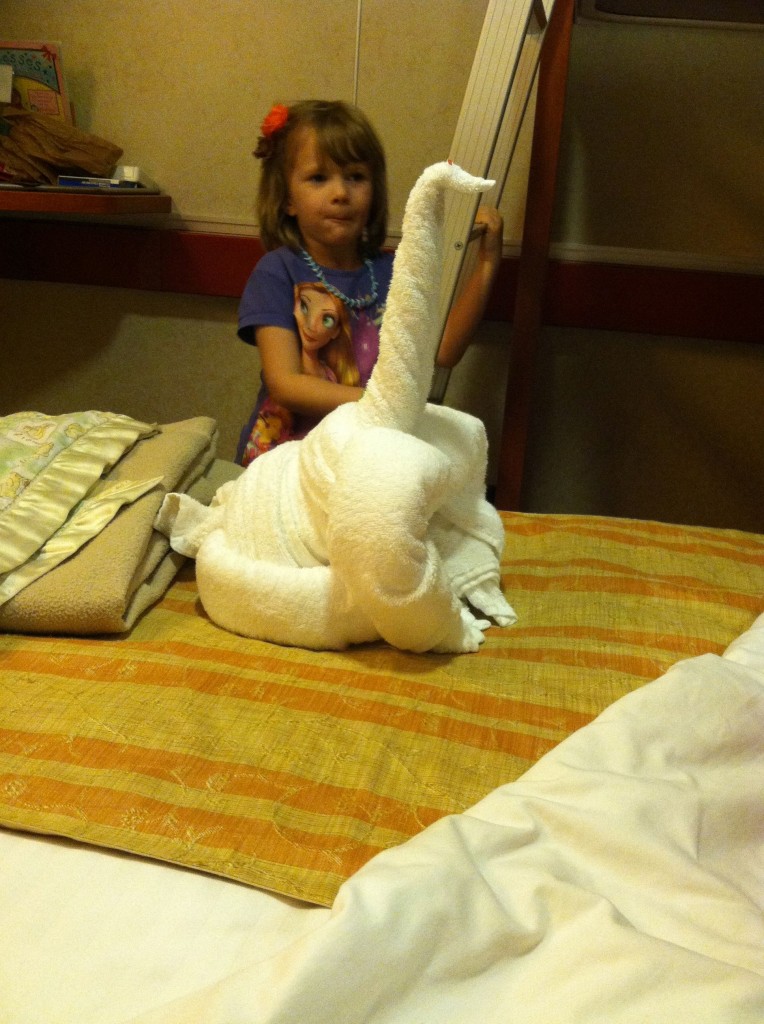 We did not leave an order for room service as we all wanted to sleep in late.