Ellie and I woke up at the same time and I wanted to sneak out and see the top deck again. Ellie wanted to come with me but before we could get out, Rosie was awake.  The girls went to the top deck to give dad some privacy to get ready for breakfast.  We had plans to meet dad at the breakfast buffet on the lido deck after while. Here was the view from the top deck, front and back of the ship: 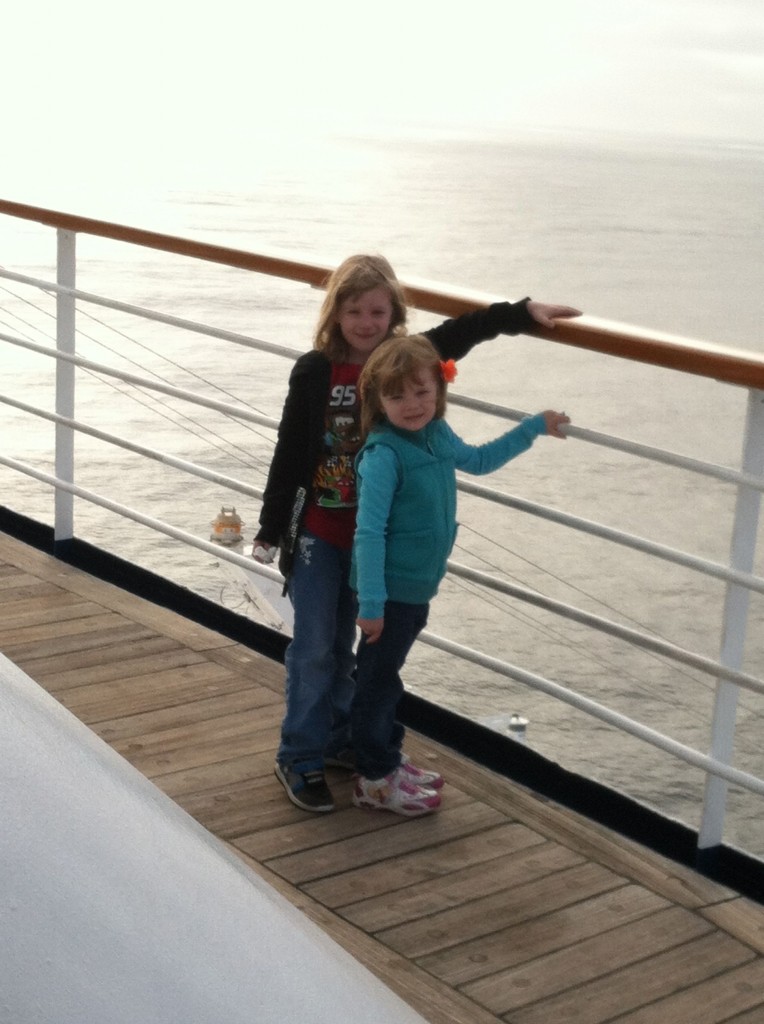 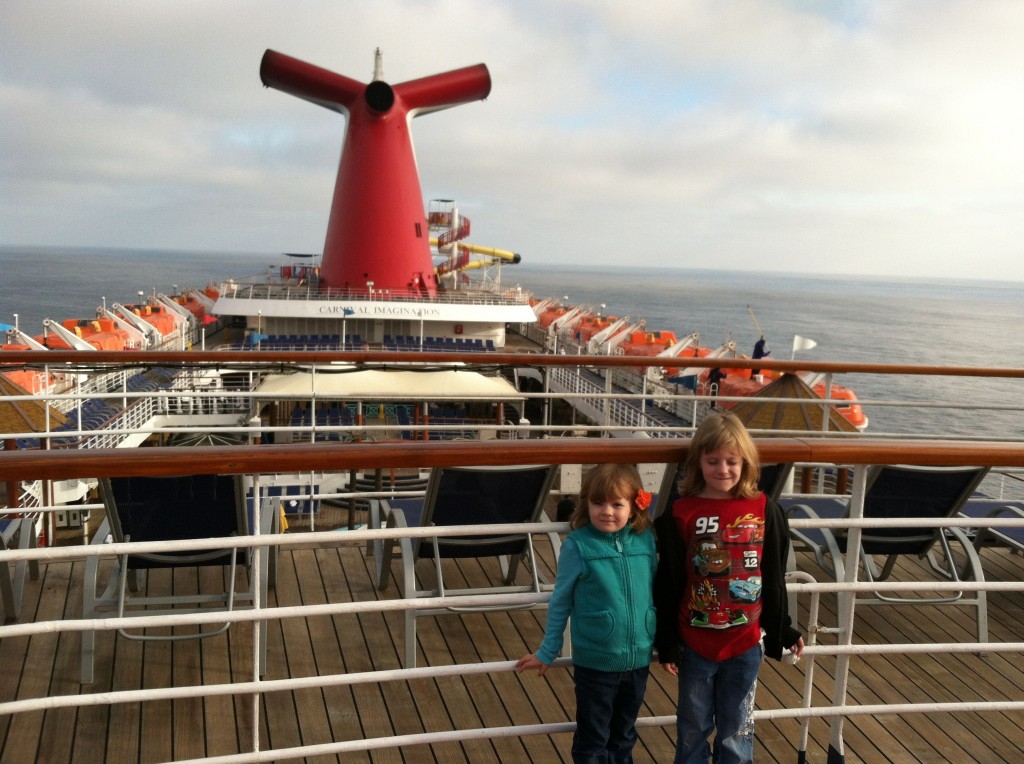 On the way to the buffet we encountered this along the sides of the pool.  Those are tons and tons of towel animals lined up on the deck lounges. It was creepy and cool at the same time. 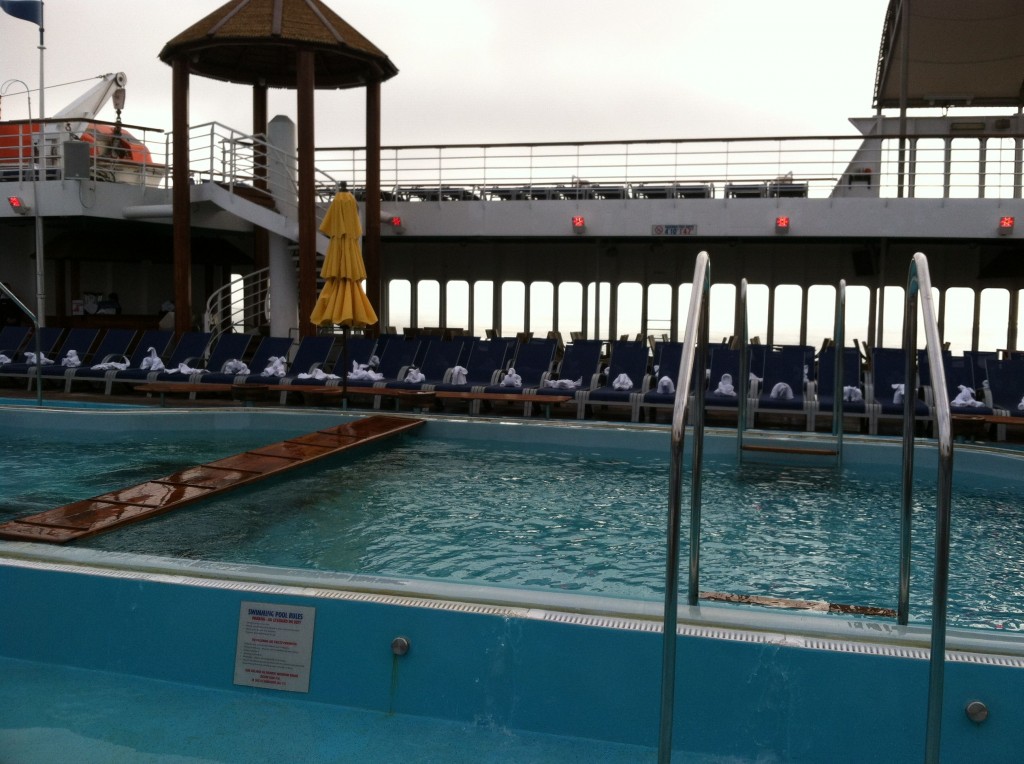 After breakfast, we took the kids to a towel animal making class.  Ellie and I worked together, sometimes making an animal and sometimes making a big mess.  Rosie was getting some special help from a room steward.  It was really fun. 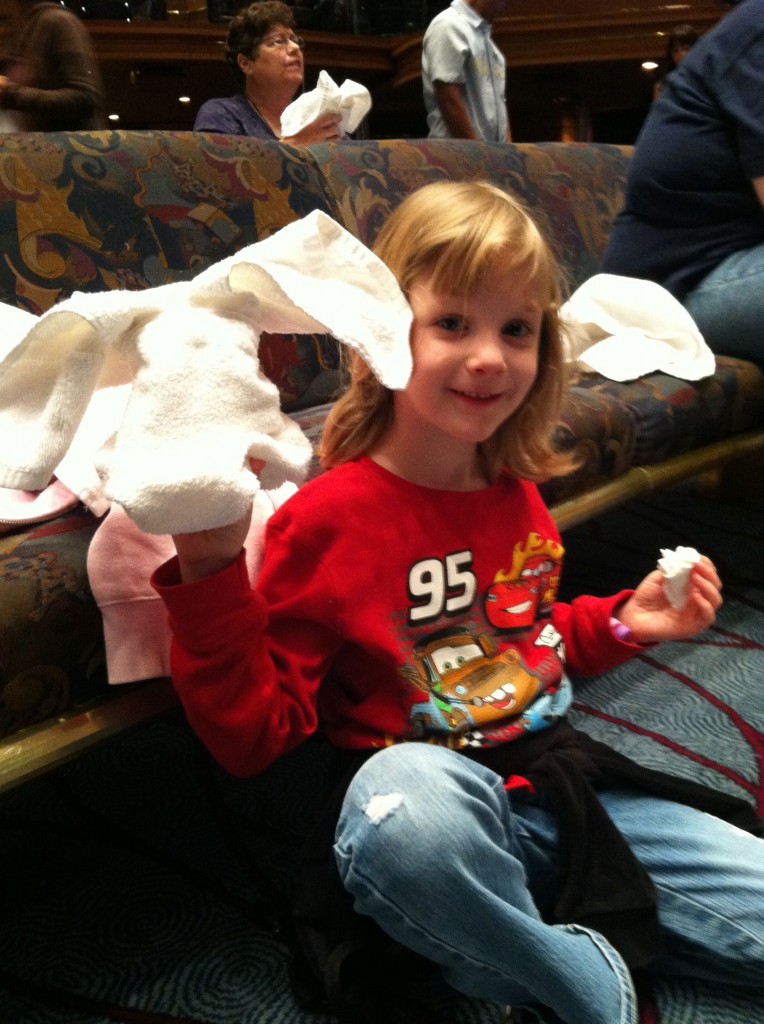 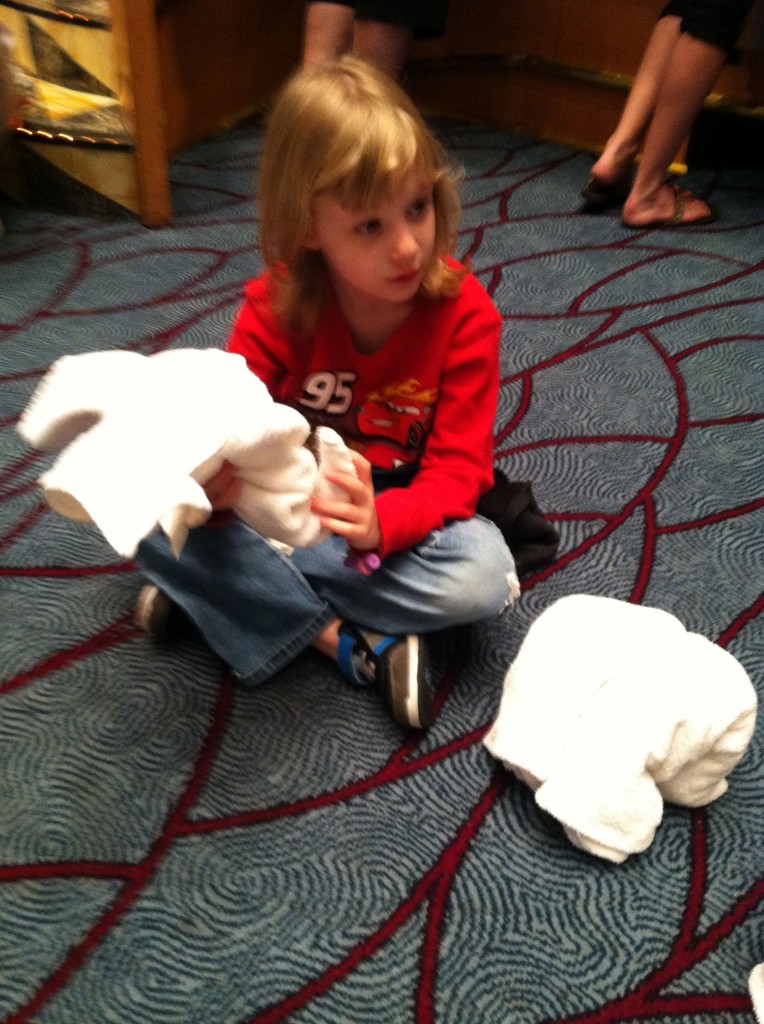 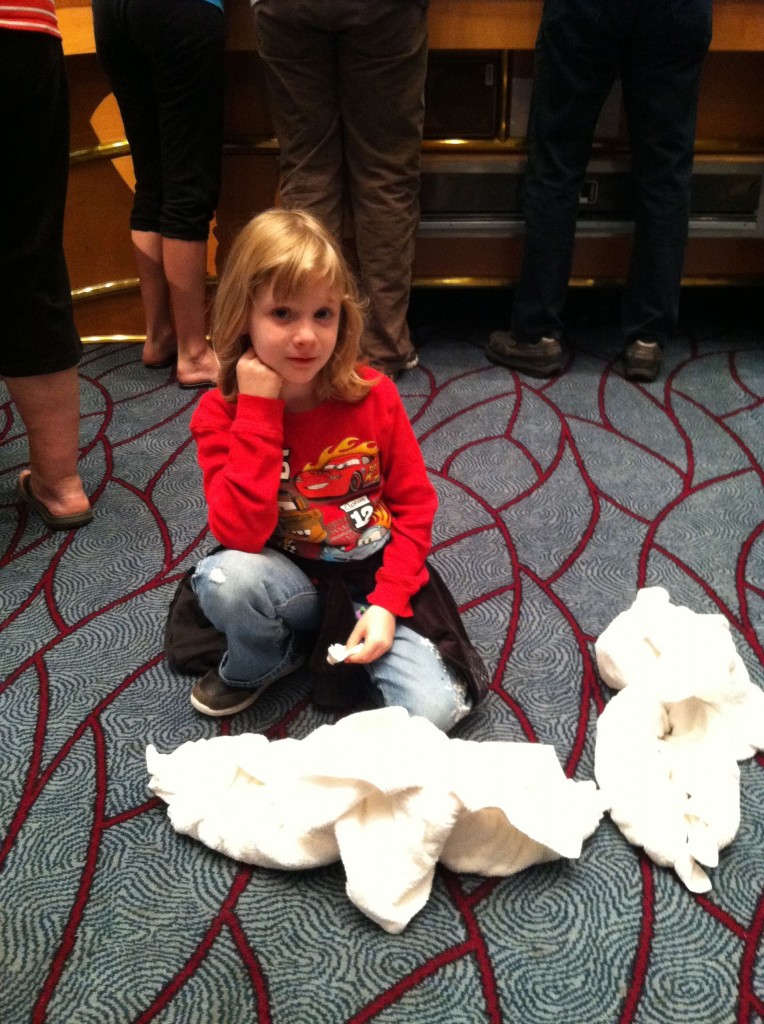 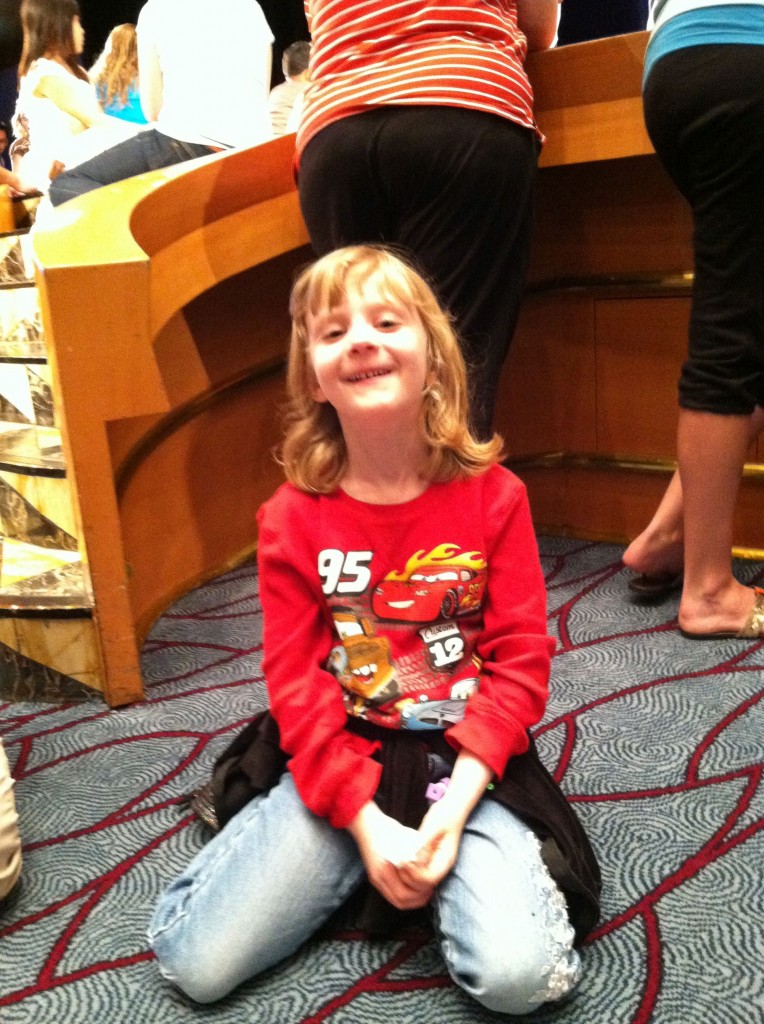 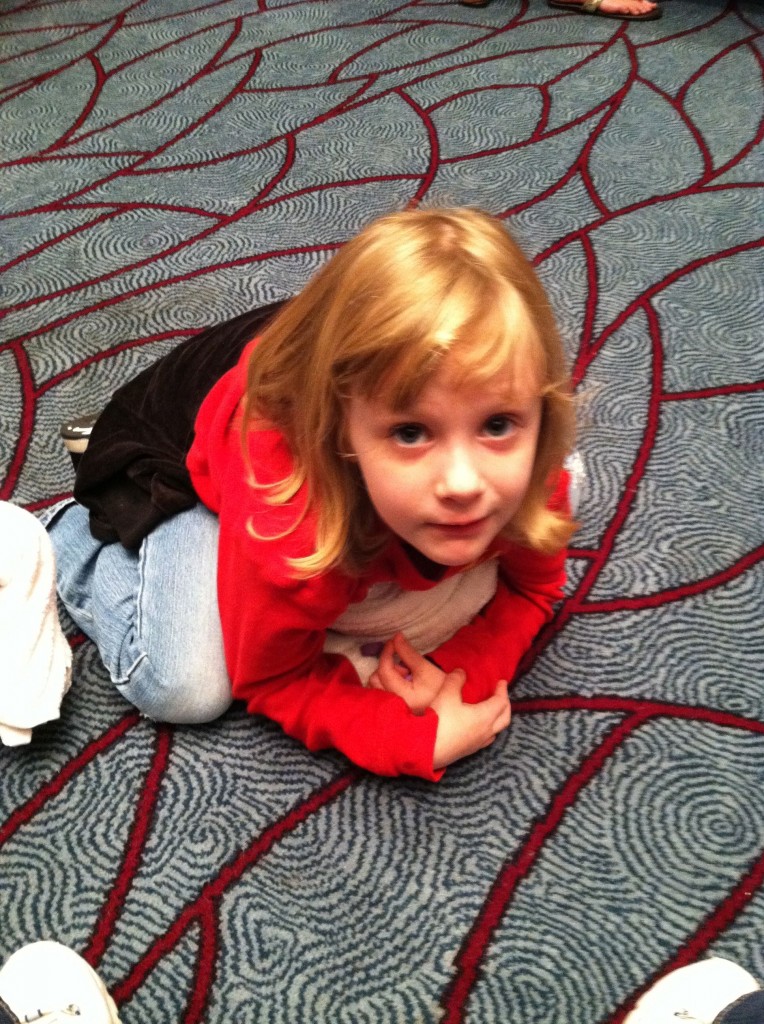 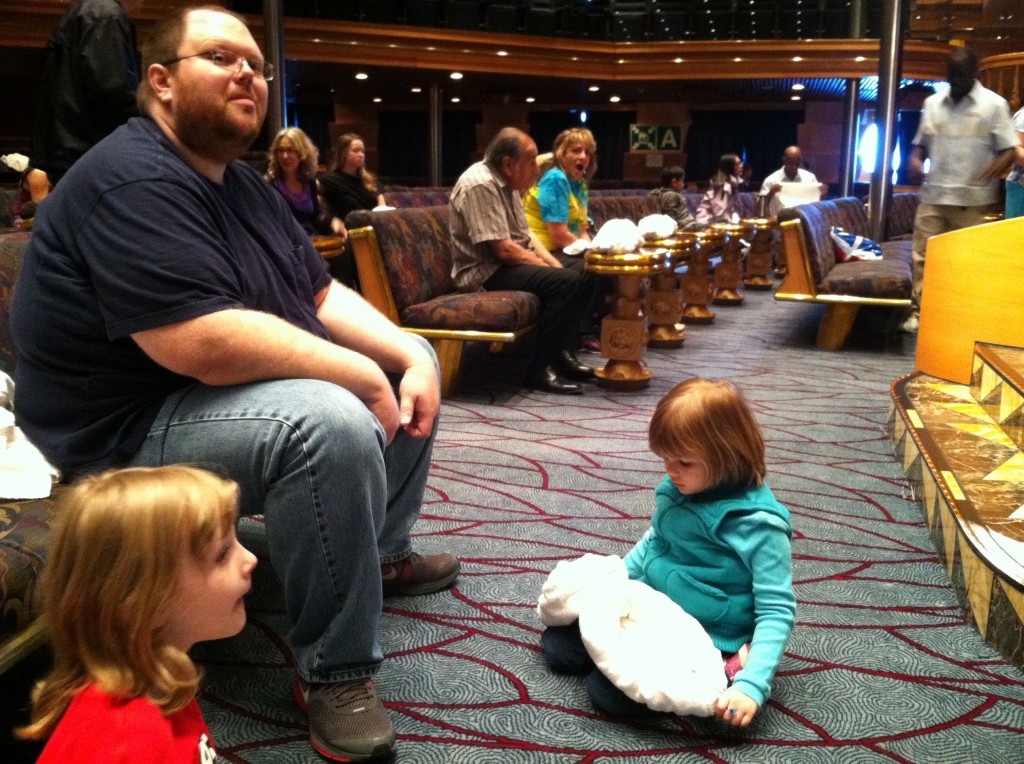 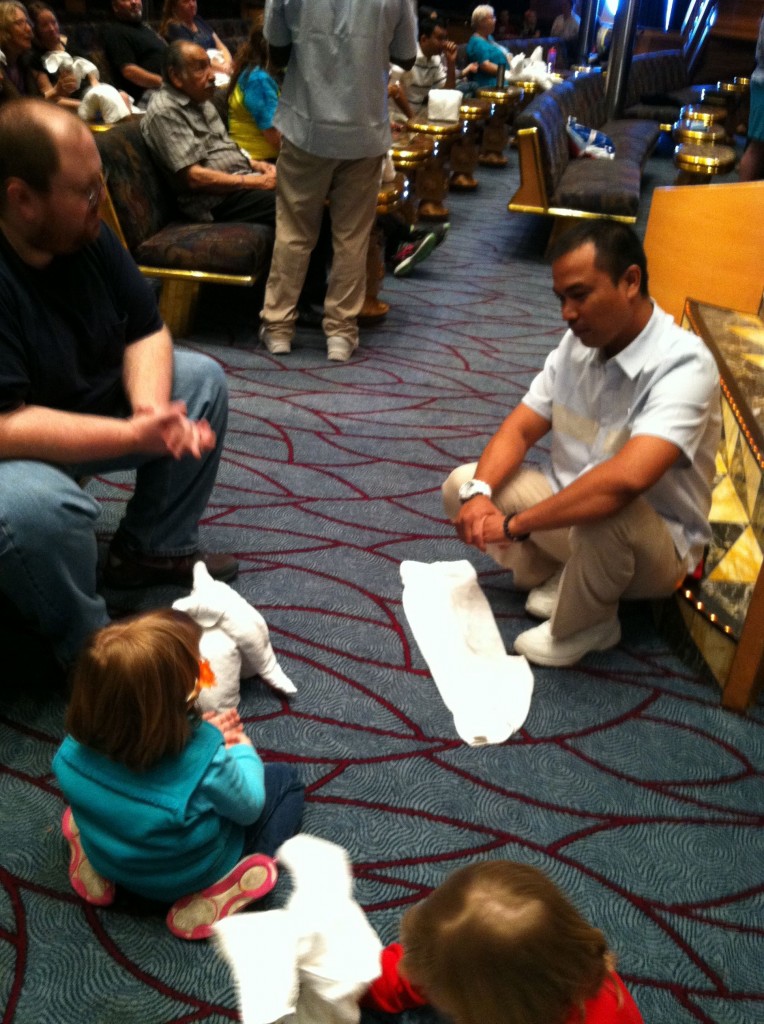 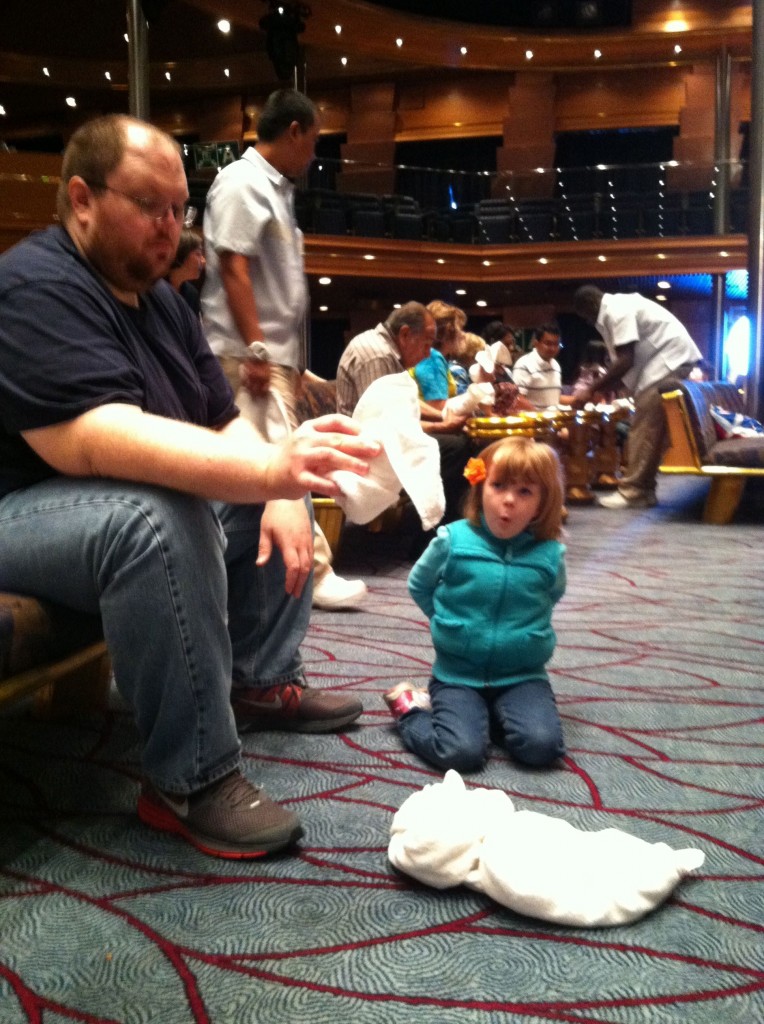 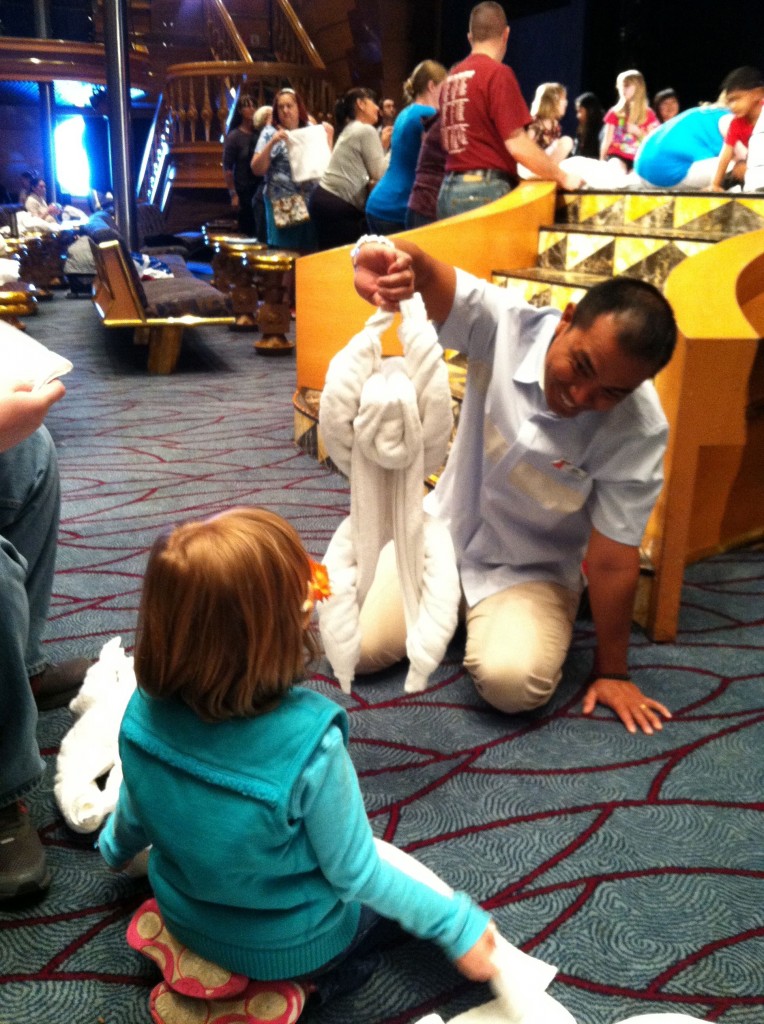 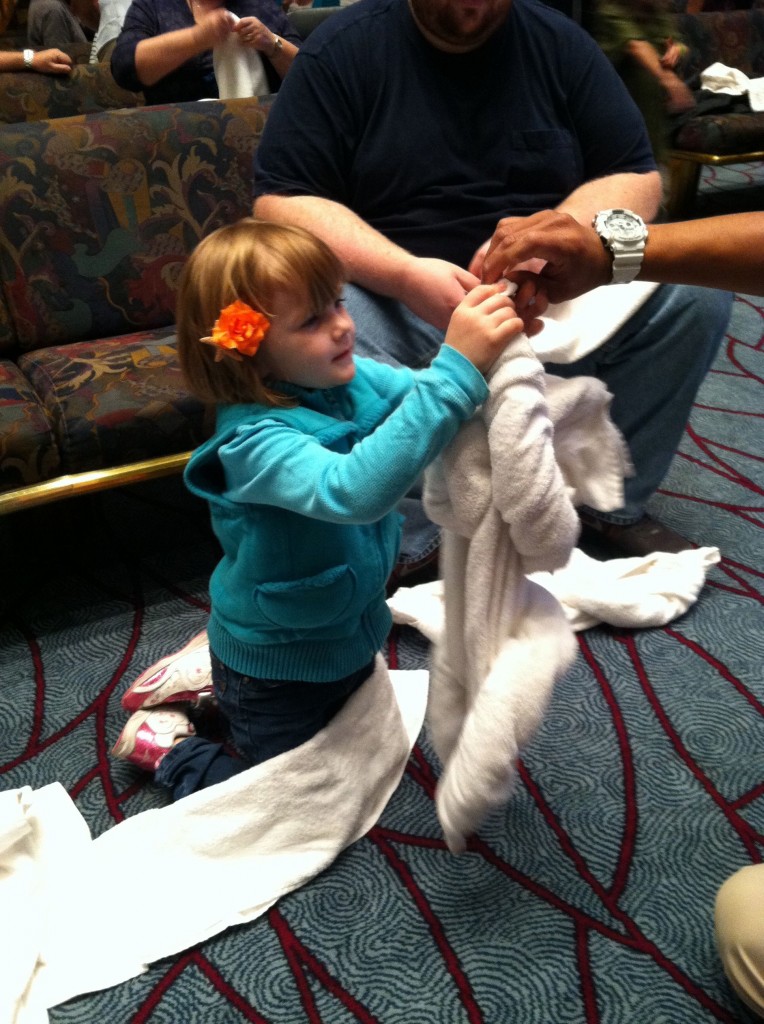 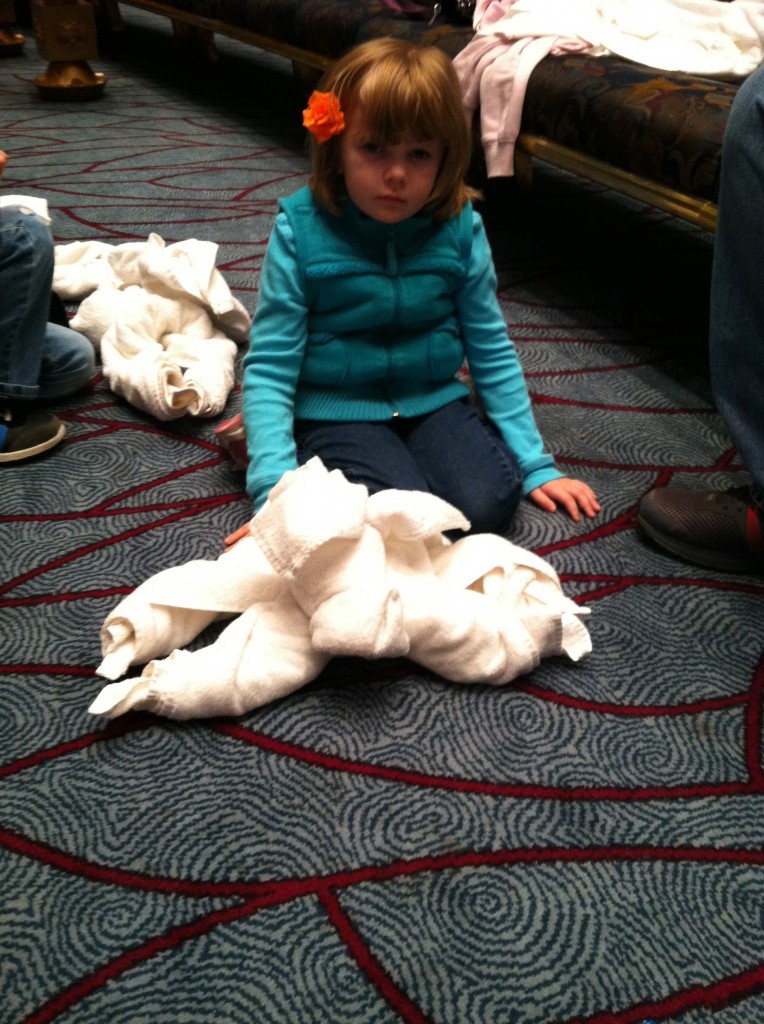 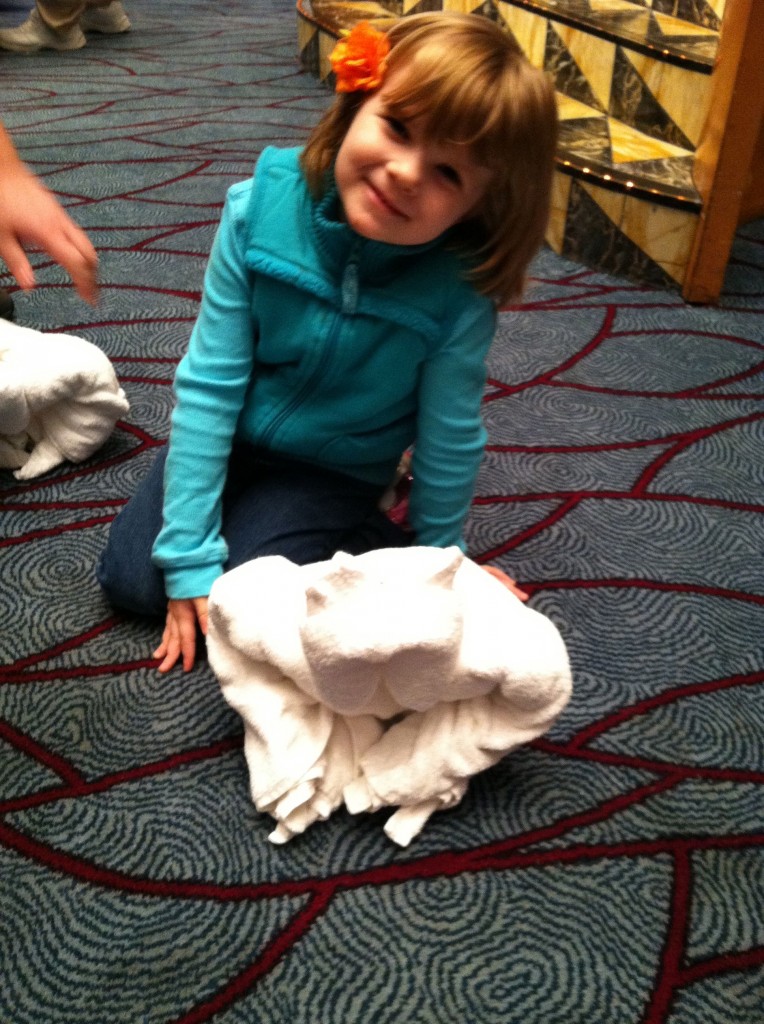 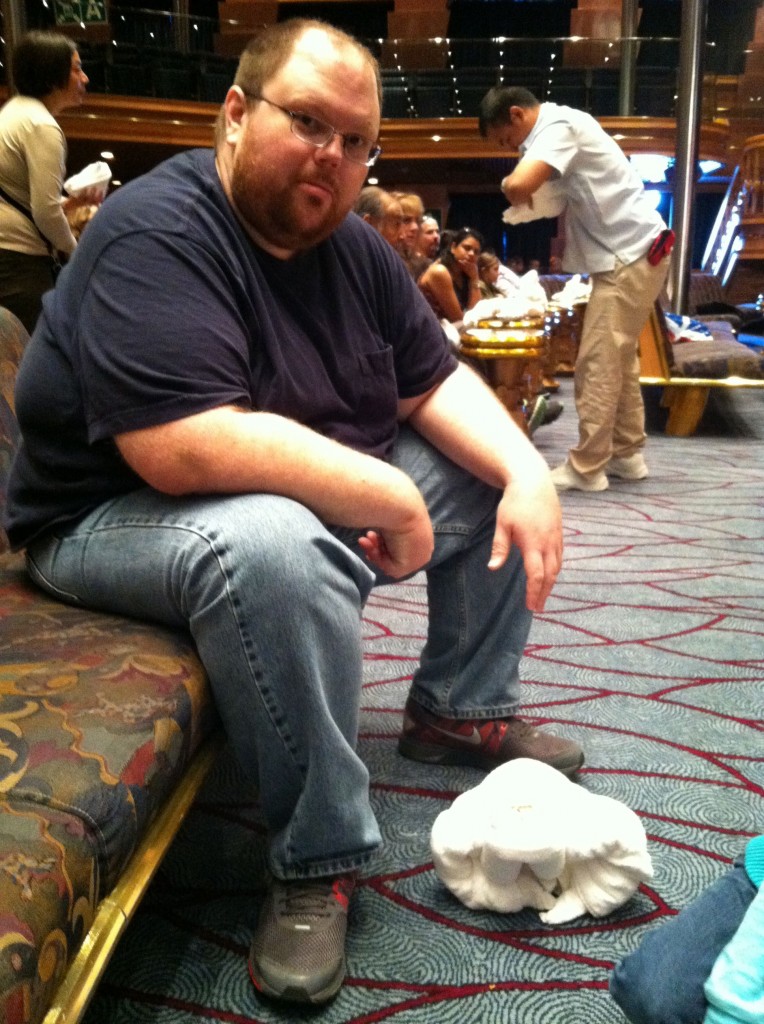 Afterwards, they invited the kids up on stage to watch Towel Animal Theater.  It was a towel puppet show and it was cute and funny. 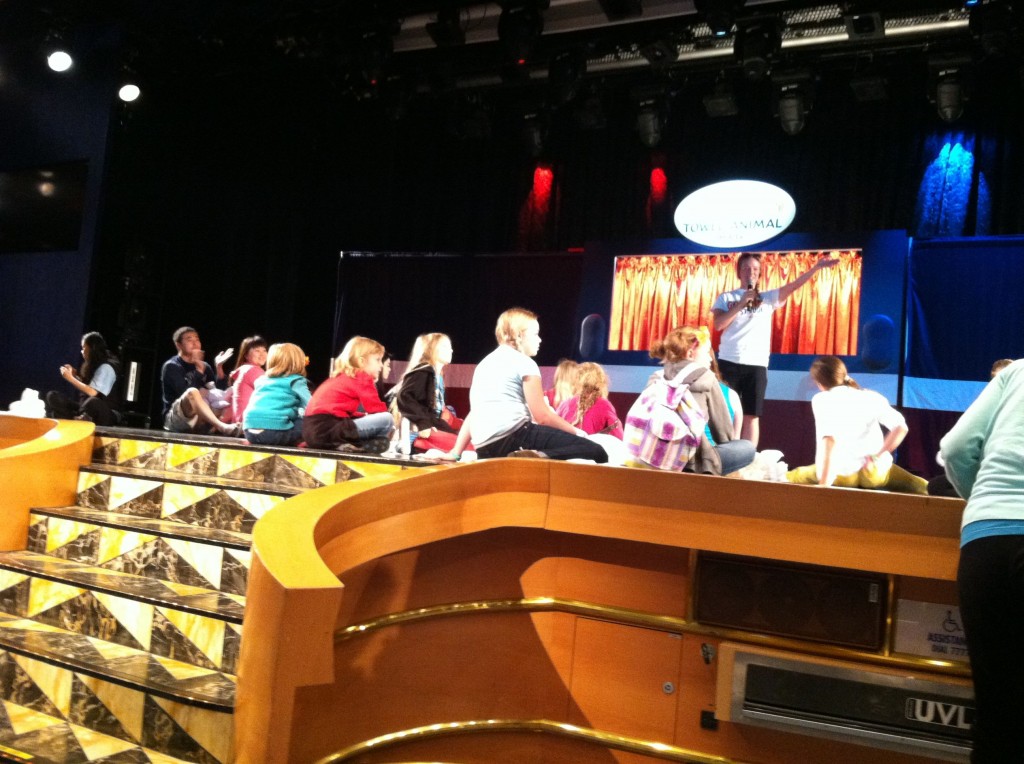 Here are the girls getting some extra attention from the assistant cruise director, Giggles. 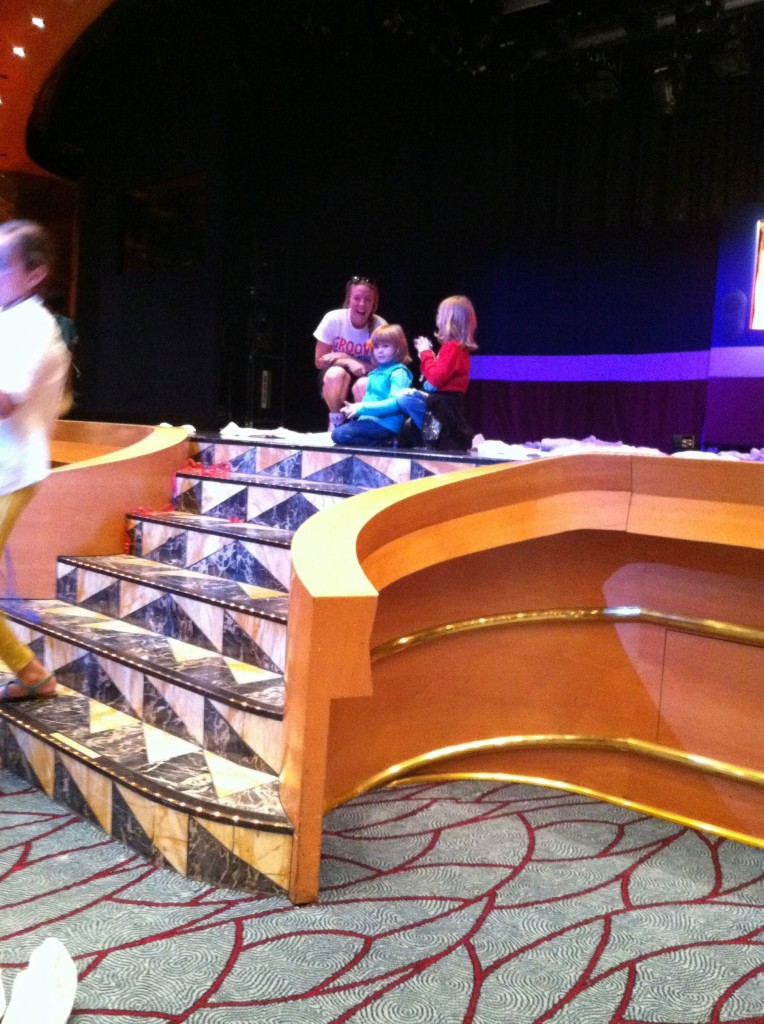 Then, Chris and Dottie came to the top deck with us to see the view and play mini golf.  Neither Dottie nor Maurice really wanted to be up on the tip of the ship but they were good sports so we could get these pictures. 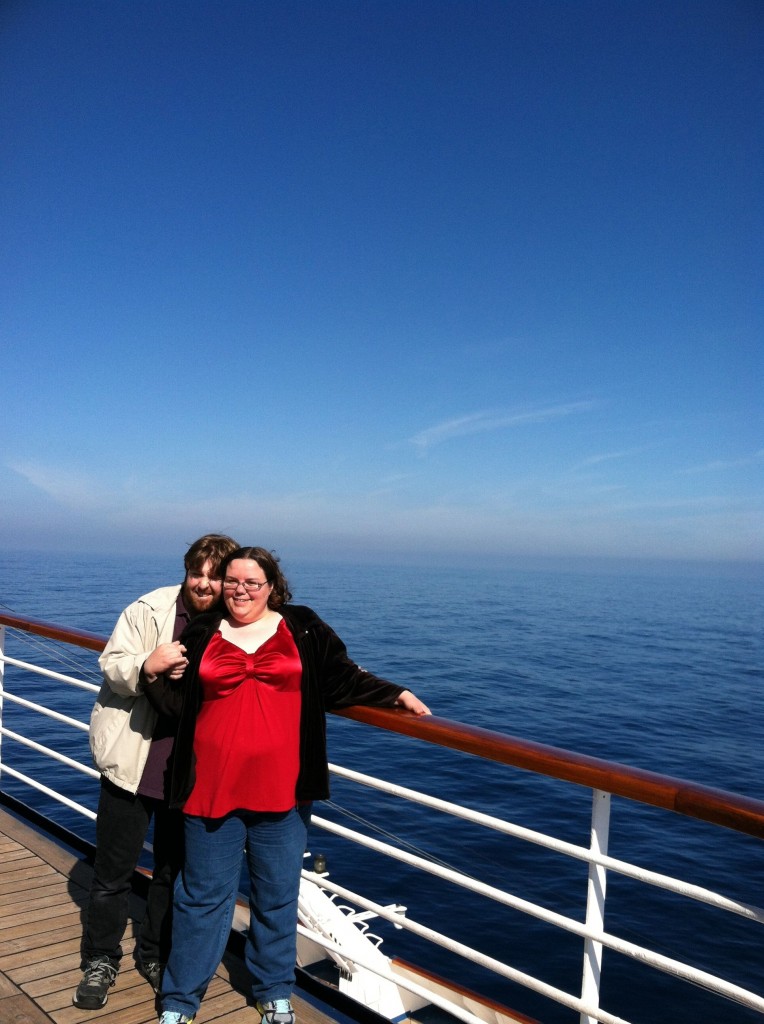 I didn’t play so I could take pictures of the group.  It was relaxing but also very sunny (after days of overcast) so I think we all got a little bit of a sunburn. 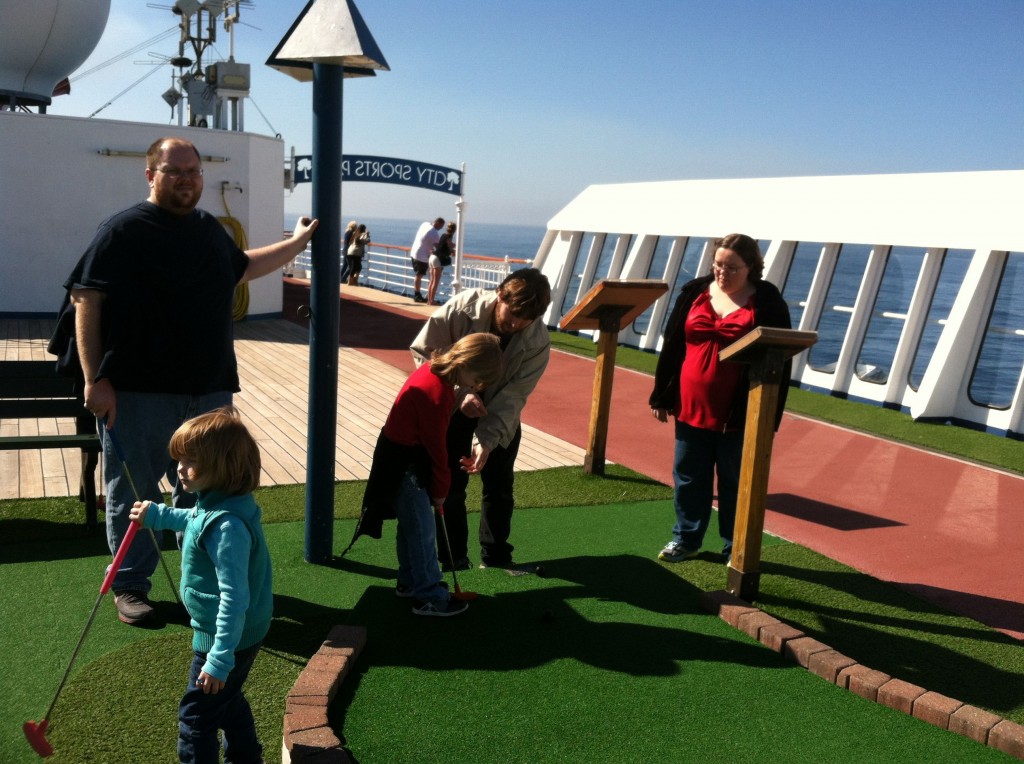 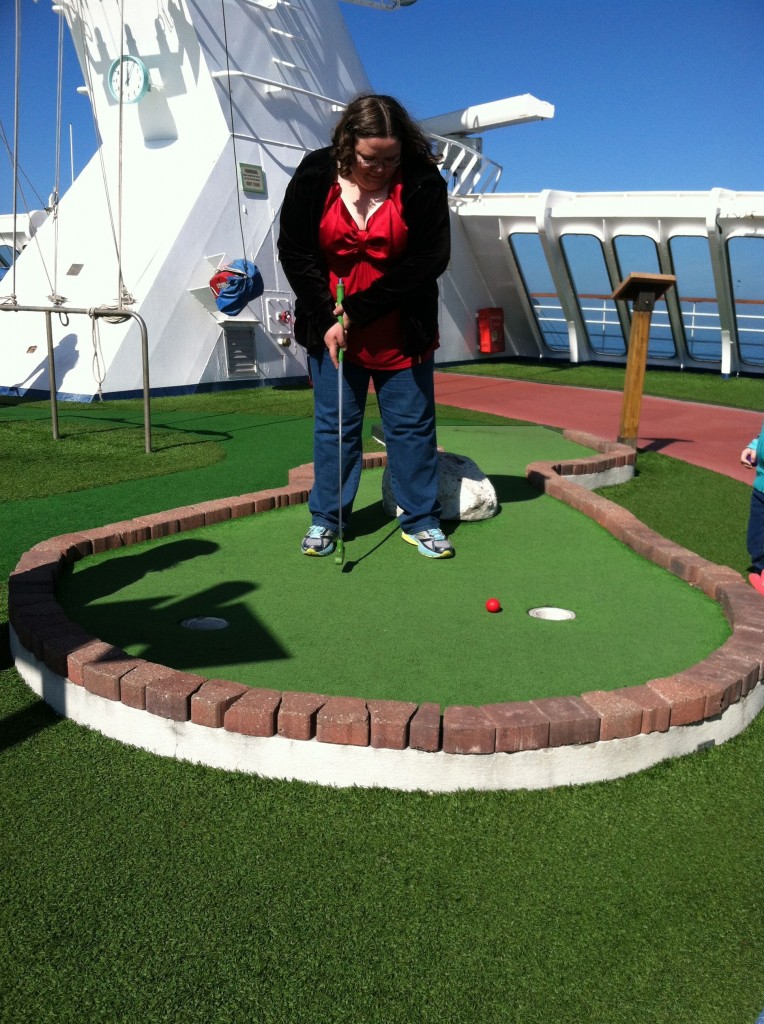 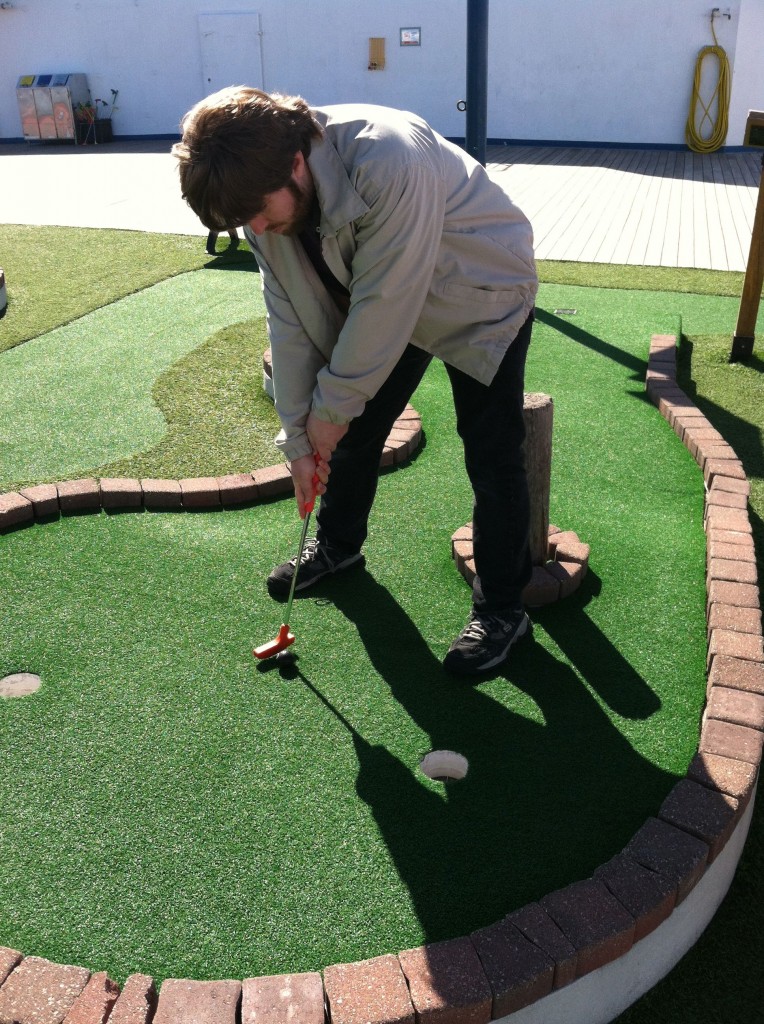 From mini-golf we had lunch and then dropped the kids off at kids club for a little while.  Since none of us had cruised, we didn’t realize they were going to take our luggage the night before debarkation so I spent the afternoon re-packing everything to have our bags outside our door by 11pm while still having clothes to put on the next morning.

When we came back for the kids, their faces were painted. They said they were having a really good time. 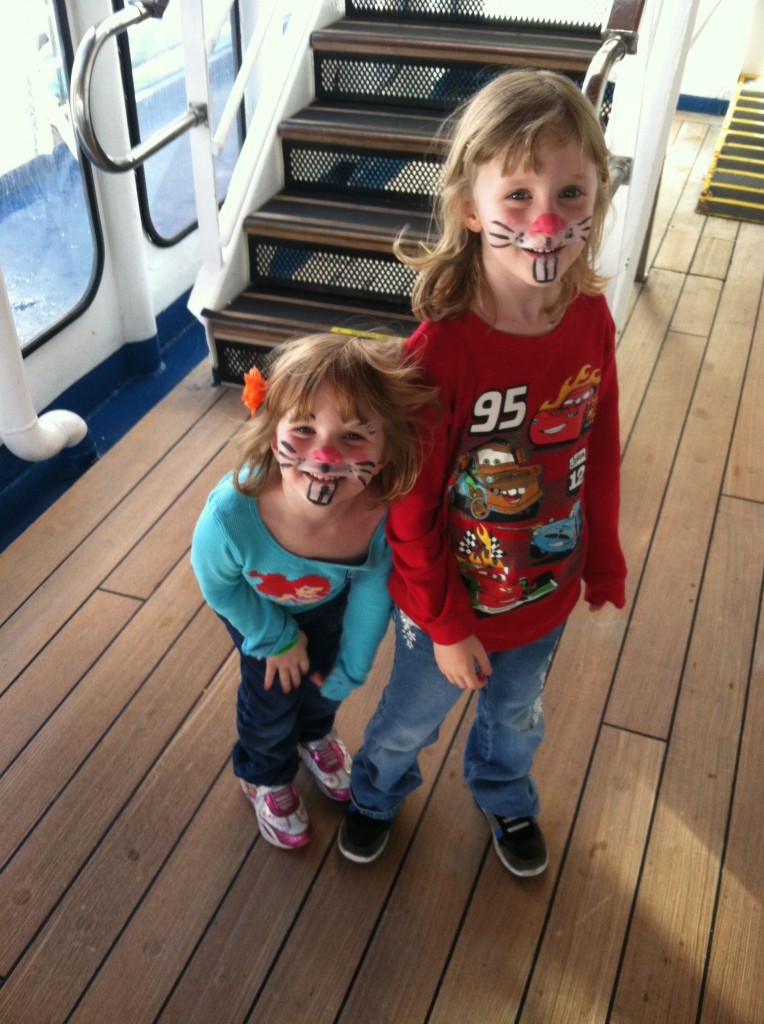 Since we were at sea, the casino was open 24/7 so we hadn’t seen much of Grandma (and Grandpa) for days.

The rest of us sat at the lido deck bar and relaxed until Maurice and I took the kids for a quick buffet dinner.  Then we took them back to kids club so we could have a dinner date just the two of us.  It was really nice and I was grateful for the time together. Then we walked the ship, thinking we’d go to the casino.  I thought it was too crowded and we left.  We did run into Grandma and Grandpa and Ella here though.  Ella came with us to pick up the girls from kids club.  We made one more trip to the top of the boat to see if we could see stars.  Still overcast.  We all headed to bed.