Maurice had some time off of work around Christmas and I had this wild idea to make some acrylic Lego display boxes.  I tried to find some online and had no luck so we made plans to build what I wanted. Mostly I just didn’t want to have to take the Lego Christmas village apart and rebuild it again next year.  I didn’t get a lot of pictures but here’s what we ended up with.

We made 4 bases and acrylic boxes. 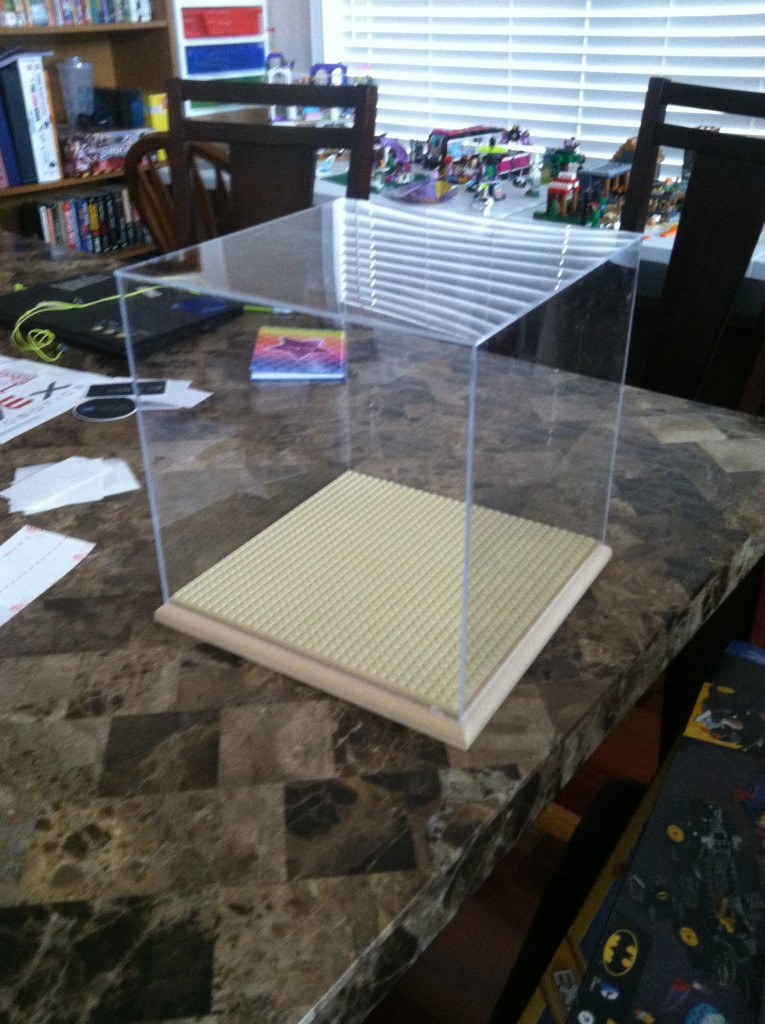 Then I painted them in bright, “Lego” colors. 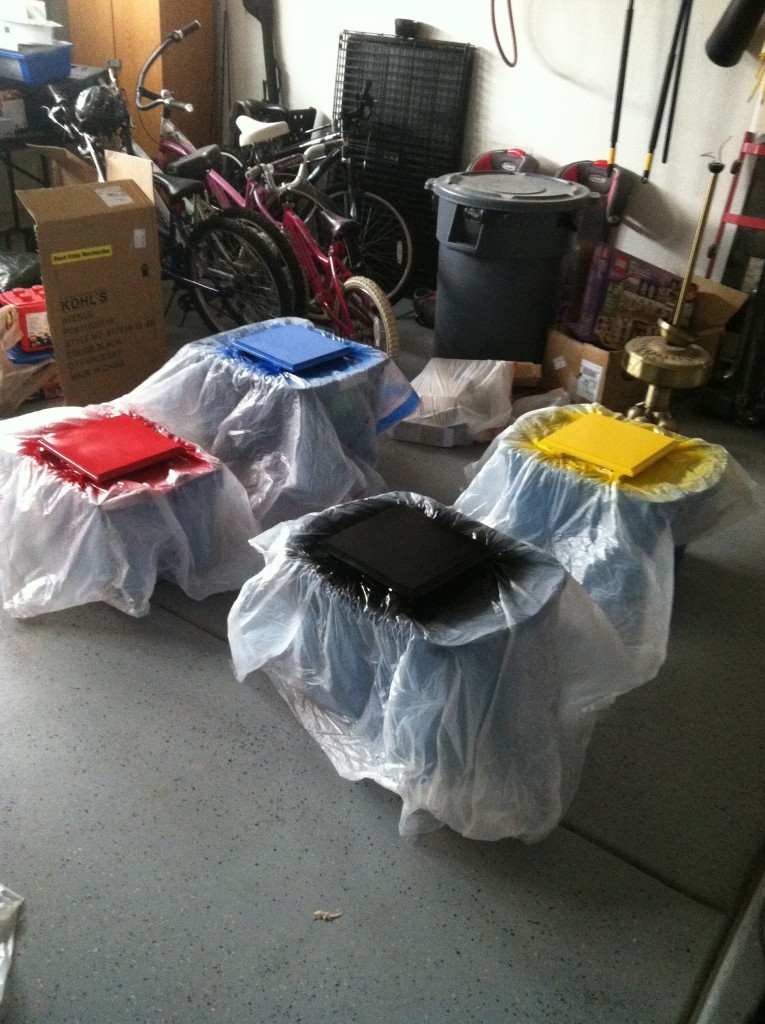 Here’s the Lego village we ended up with this year.  It was pretty small because we didn’t have a lot of time to build with the drywall repair and other craziness. 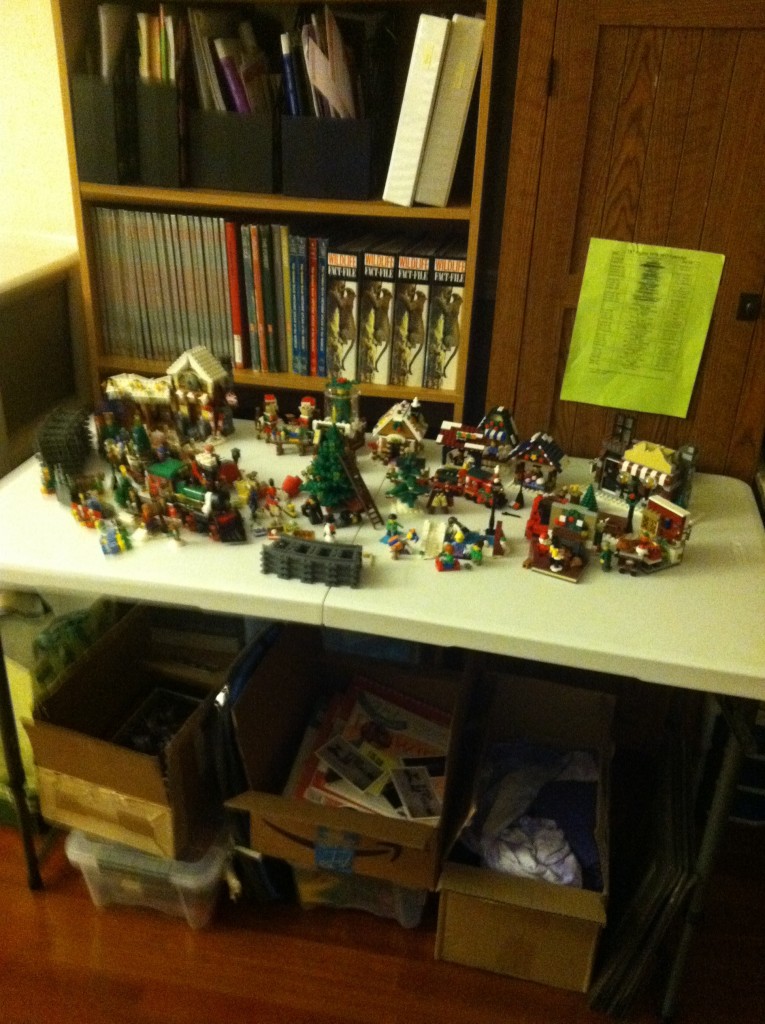 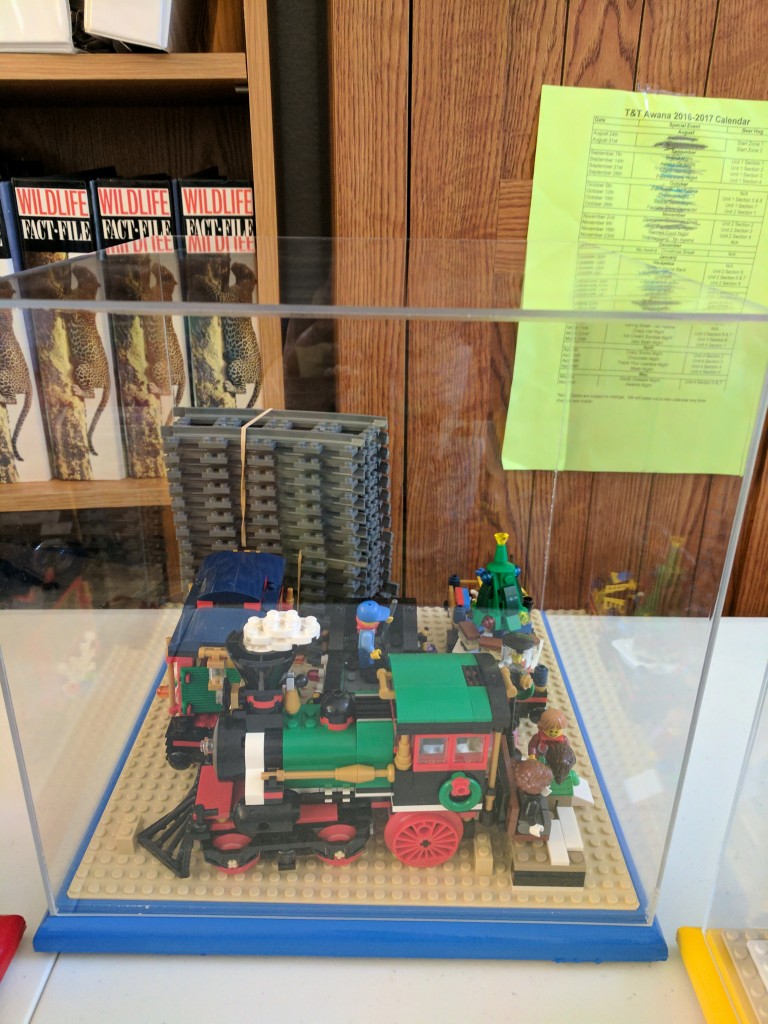 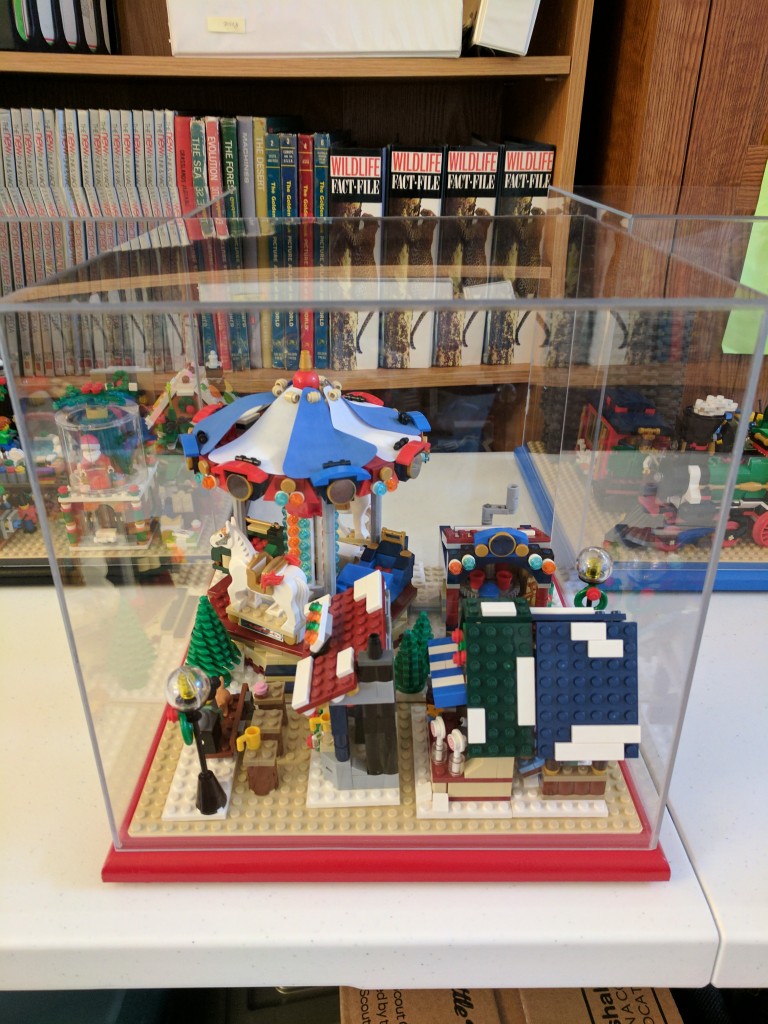 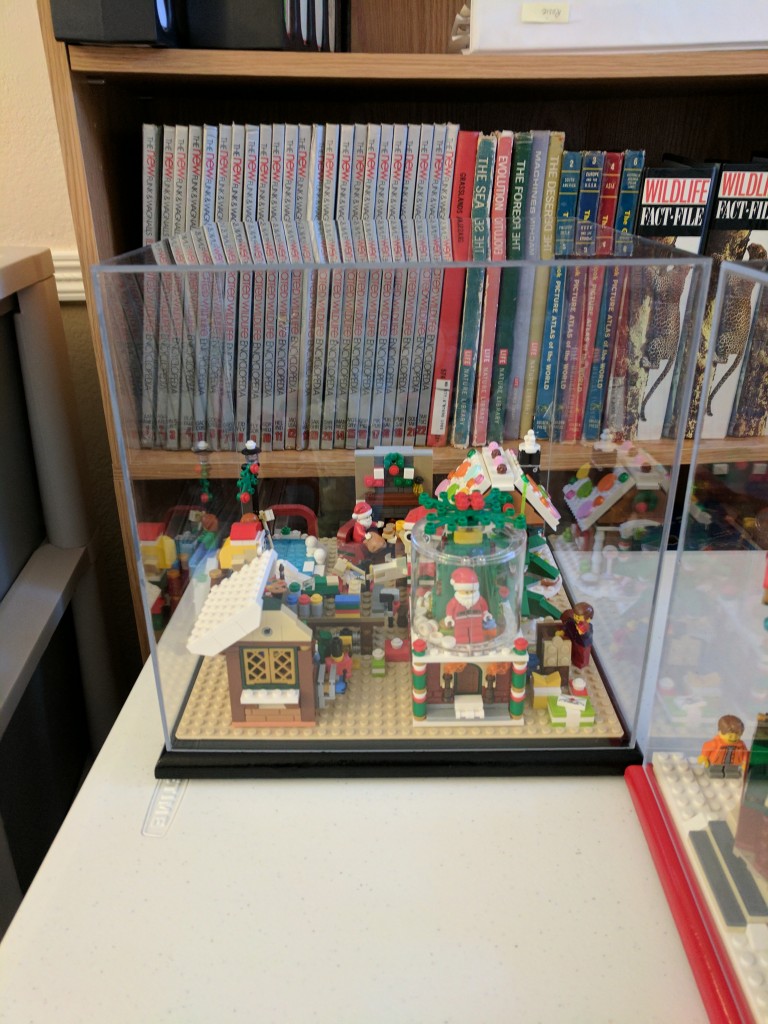 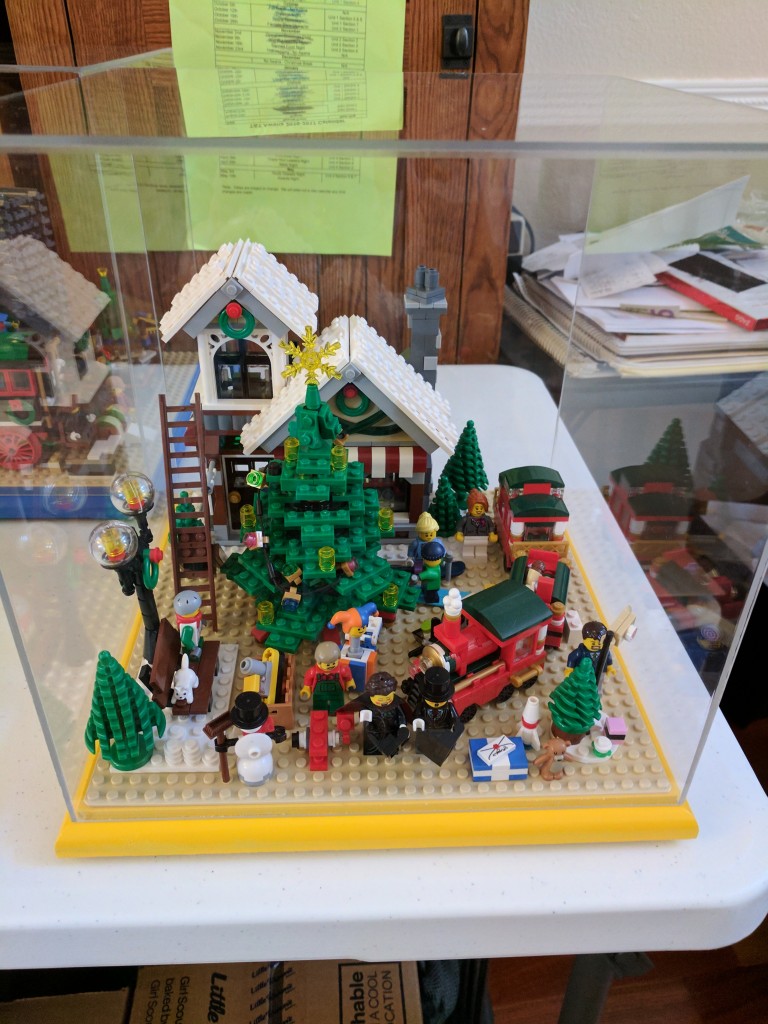 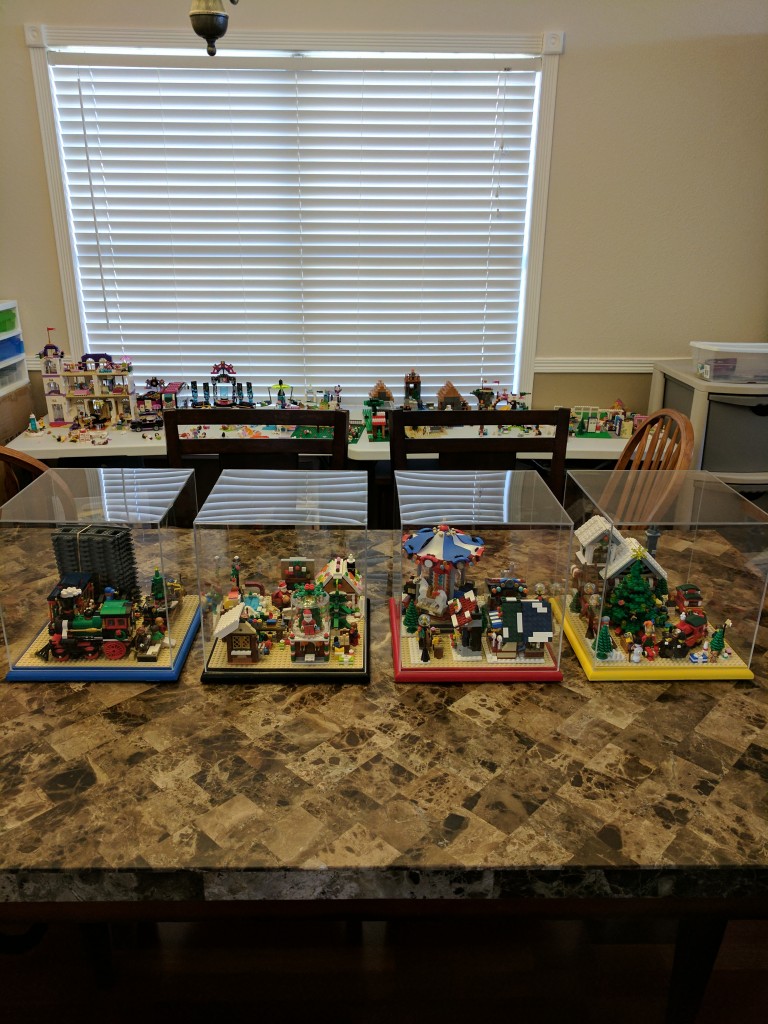 I’ve been painting the rest of the house and as soon as I got the shelf wall painted (it’s a really tame tan color and easier to see in sunlight instead of grainy pictures) we put the Lego boxes up on display. 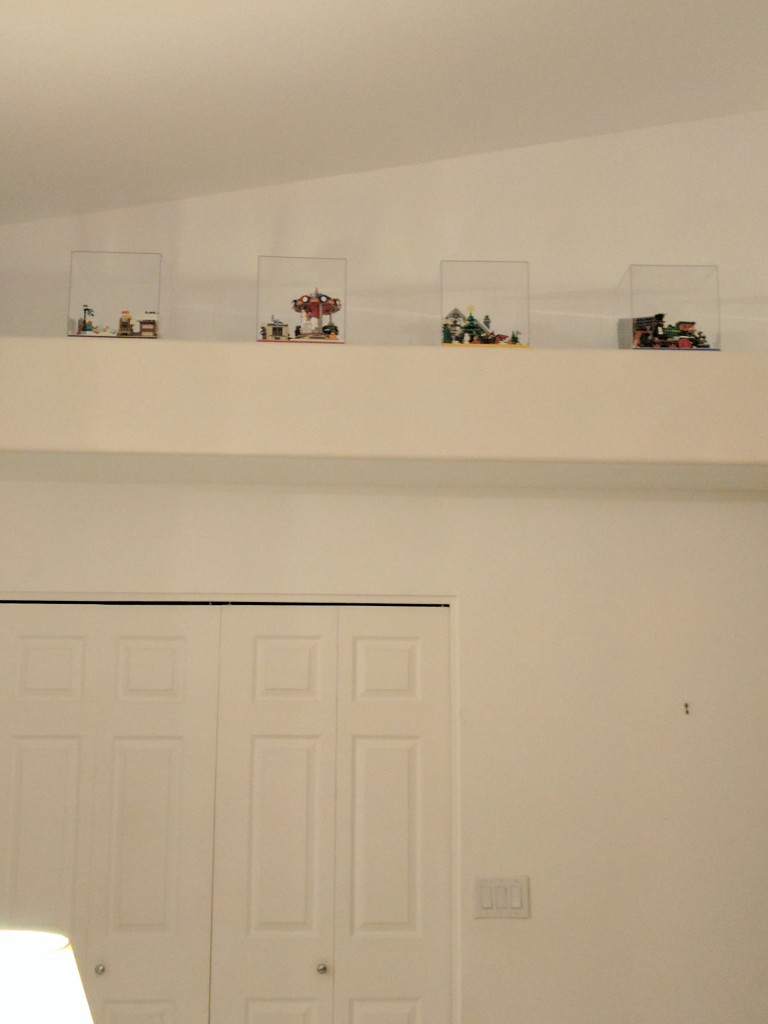 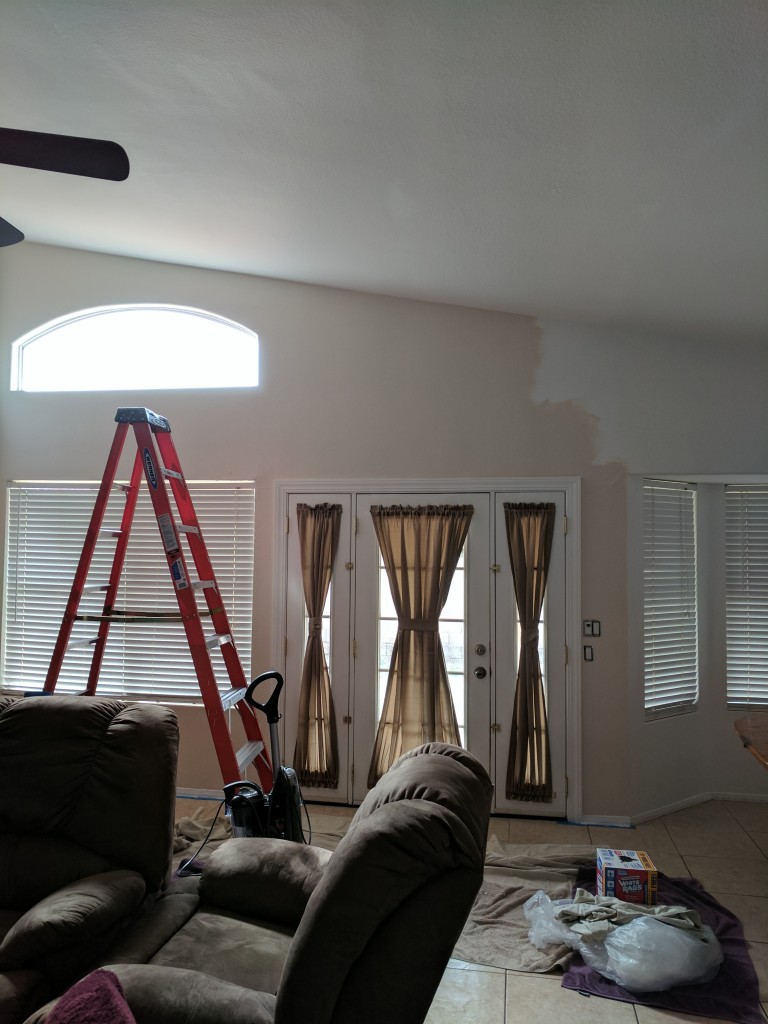 I basically cancelled all activities and I painted. And painted.  Every single room in the house.  Maurice had to go to DC for work and while he was gone, I painted our bathroom.  The girls and I didn’t do too much because I painted from the beginning of January to mid-February.  But I’m done now.  And we even got the ugly living room fan, hallway, and bathroom light fixtures all changed out.

We did have a homeschool group field trip on the calendar already so we attended at the beginning of January.  It was to the IDEA museum in Mesa and the topic was dogs.  I thought Ellie would love it.  Well, it was boring. So boring.  I was bored, the kids were bored…but we survived.  The sad thing is that it was a ‘school’ field trip.  If kids had come from school, this is their standard tour.  After the guided part was over, the girls had a blast there with their friends.  It was just too bad the school tour was such a disappointment. 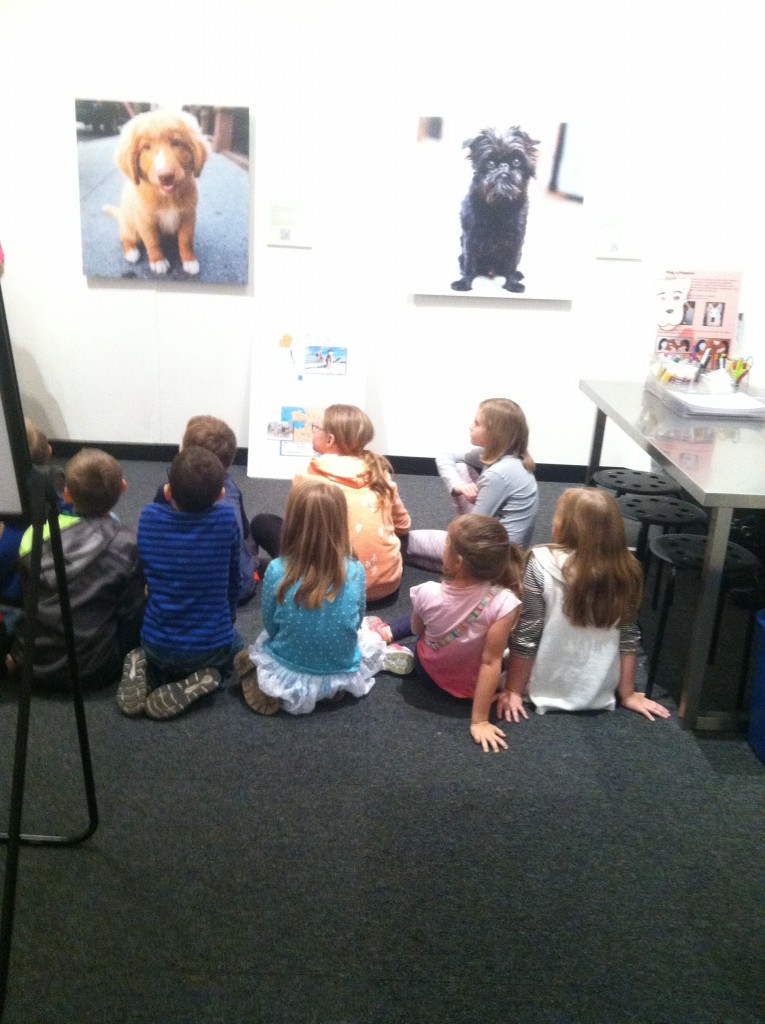 One of Rosie’s friends from church had a ‘walk the red carpet’ birthday party.  Rosie got all dolled up and it was just too cute. 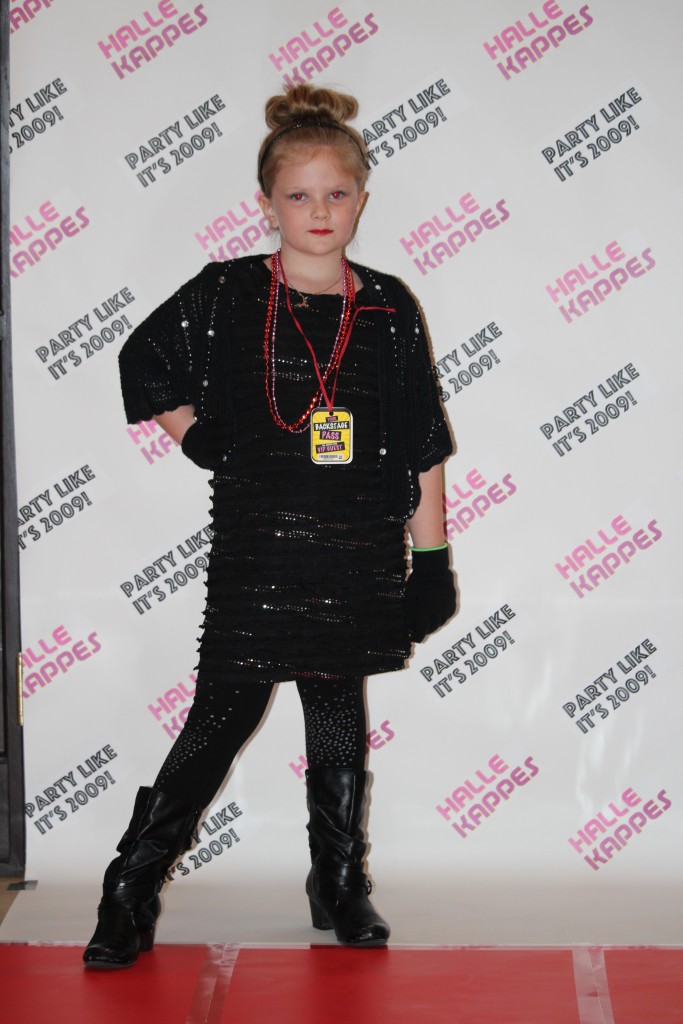 At some point we had gone over to see Grandma and Papa’s new house.  It might have been Fall of this year and I really can’t remember but I got these pictures from Granny and they are the best. 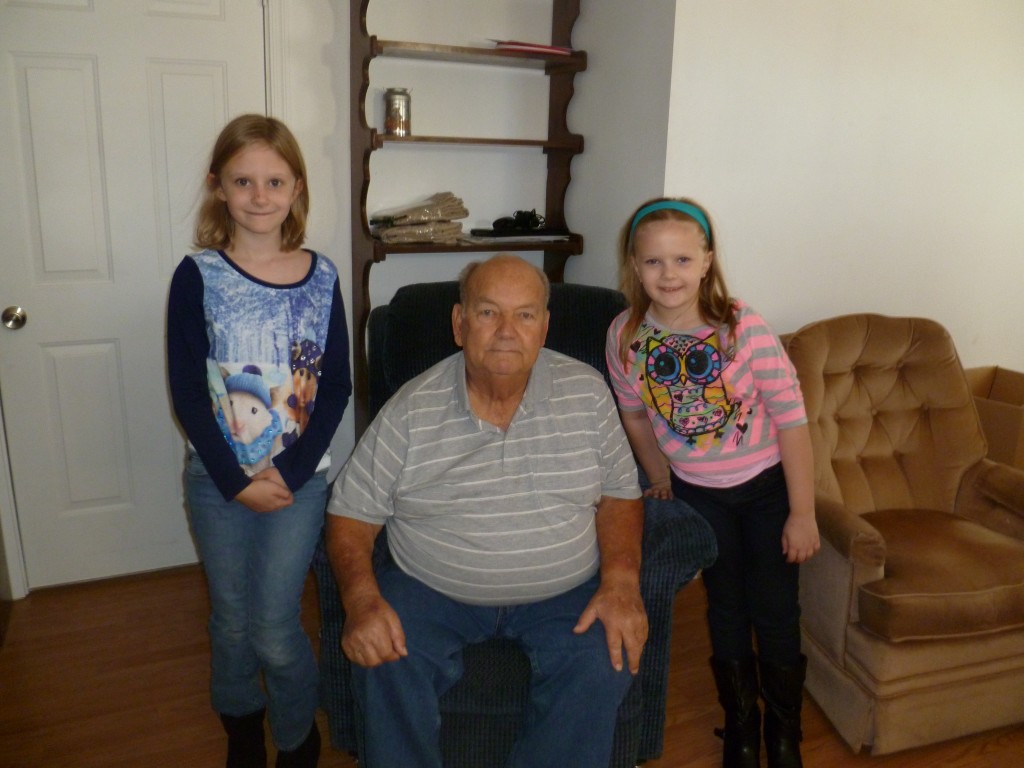 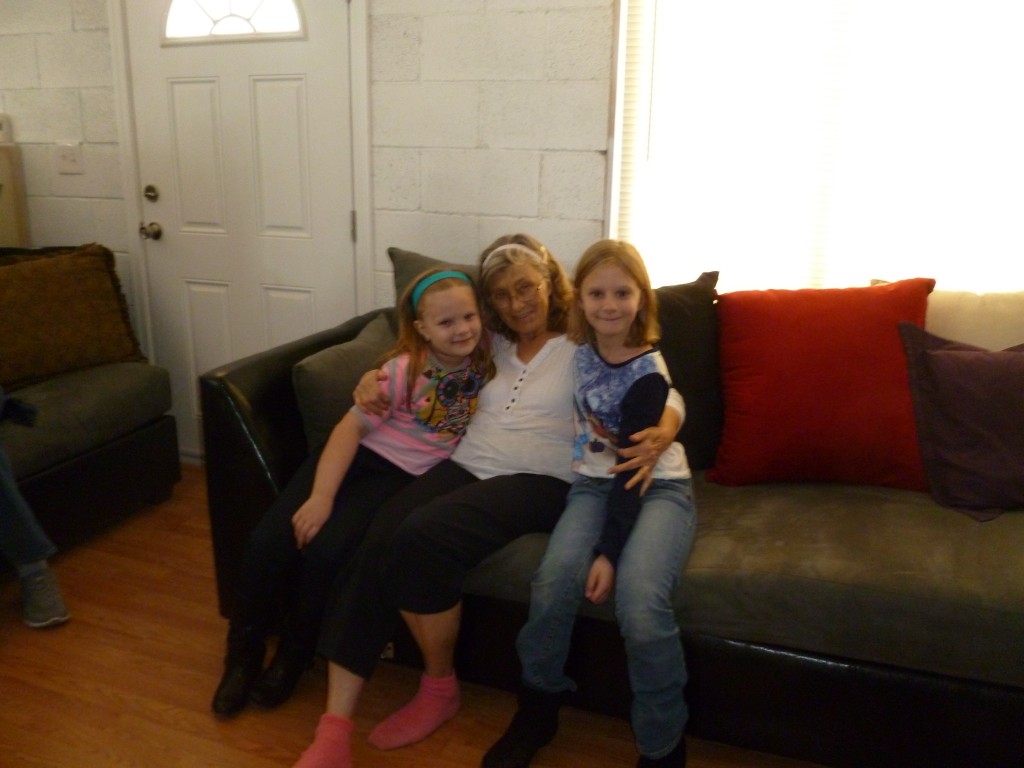 Ellie got a bunch of drawing stuff for Christmas and at one point I had taken this picture of something she drew for me.  This is us at the zoo together.  I really appreciate the details, like the fact I’m wearing flip flops. 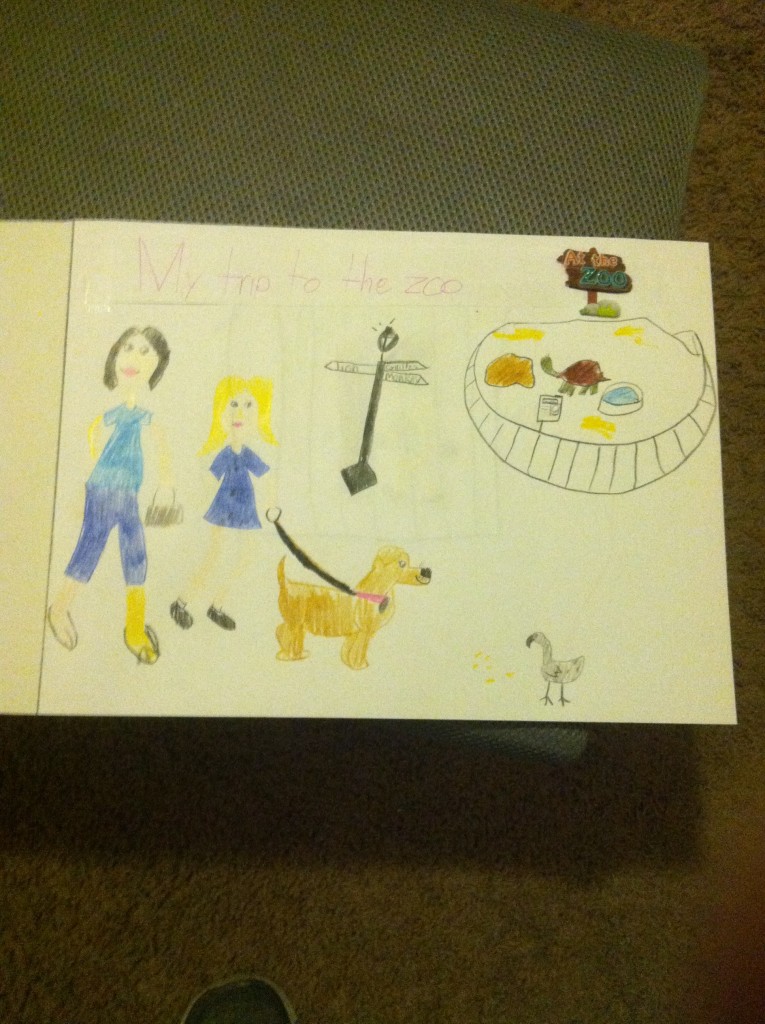 So dad had gone on his business trip to DC mid-January.  He wasn’t thrilled about the timing but he flew out there first class with Toni and it’s amazing how much he really didn’t mind when traveling like a person instead of like a piece of cargo.  My phone died while he was gone, of course, so I got a new one and that’s why my new blog pictures are so much better!  Maurice took some pictures from his phone while he was on his trip: 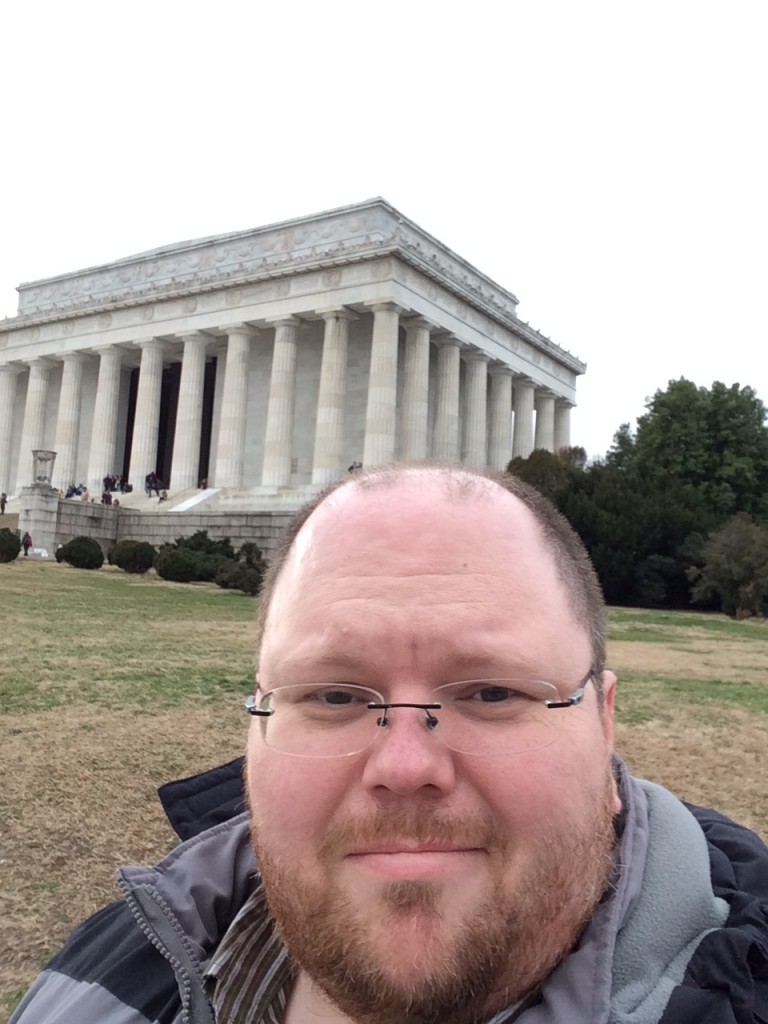 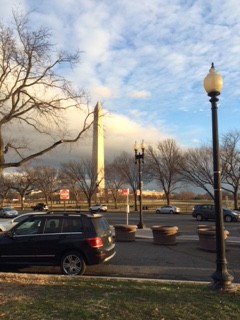 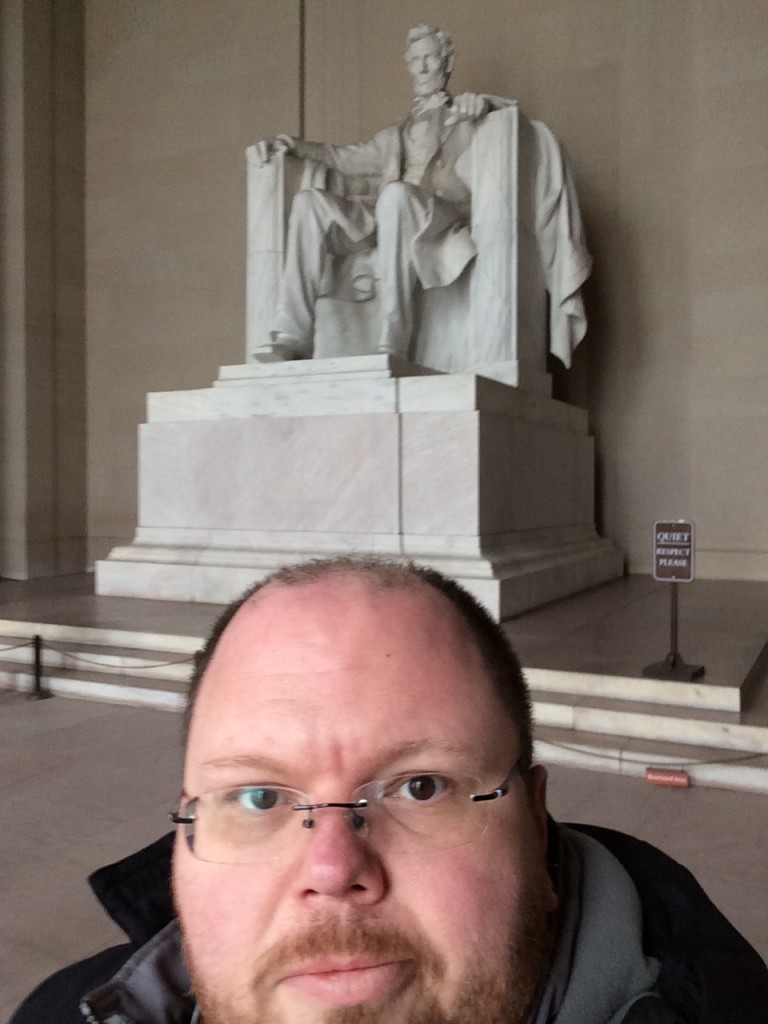 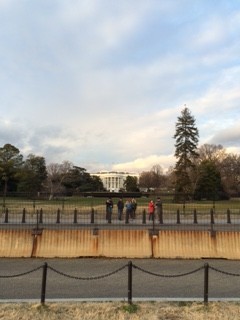 The girls wanted to sell Girl Scout cookies this year to make money for camp.  We committed to almost 200 boxes.  This was our first cookie booth. 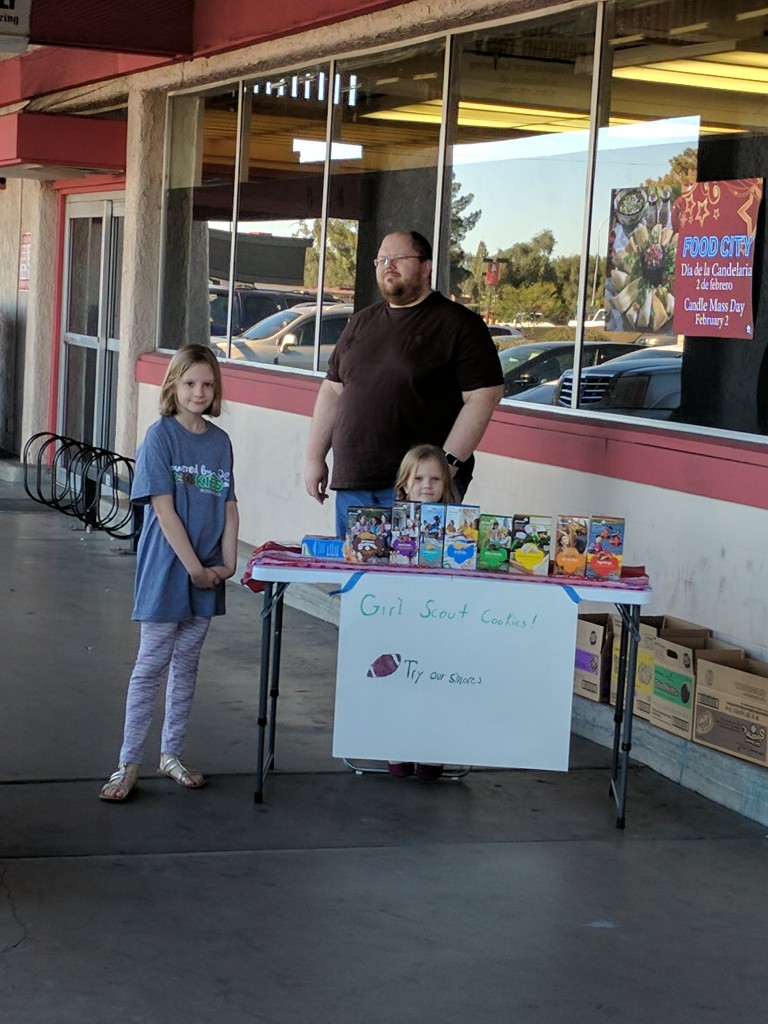 It was in South Phoenix and I think we sold 8 boxes in an hour.  We tried door to door and didn’t do nearly as well as last year.  I was getting nervous but then we had a booth on Valentine’s Day at the Safeway at 48th/Elliot and we cleaned up.  The girls sold everything in a little over an hour!  So, they should make about $50 in camp money to split.

We also did a Valentine’s card exchange at the picnic in the park day with the homeschoolers.  The girls made handmade cards but there were all kinds of things given out and they loved it.

The girls had their last VEX IQ competition for the year.  During the first one I think they came in 24 out of 26.  Well, this last one they came in 10th overall of 35 teams!  At one point they were ranked 3rd in qualifying rounds!

They ended up going 4 rounds in the qualifiers and then making the finals. 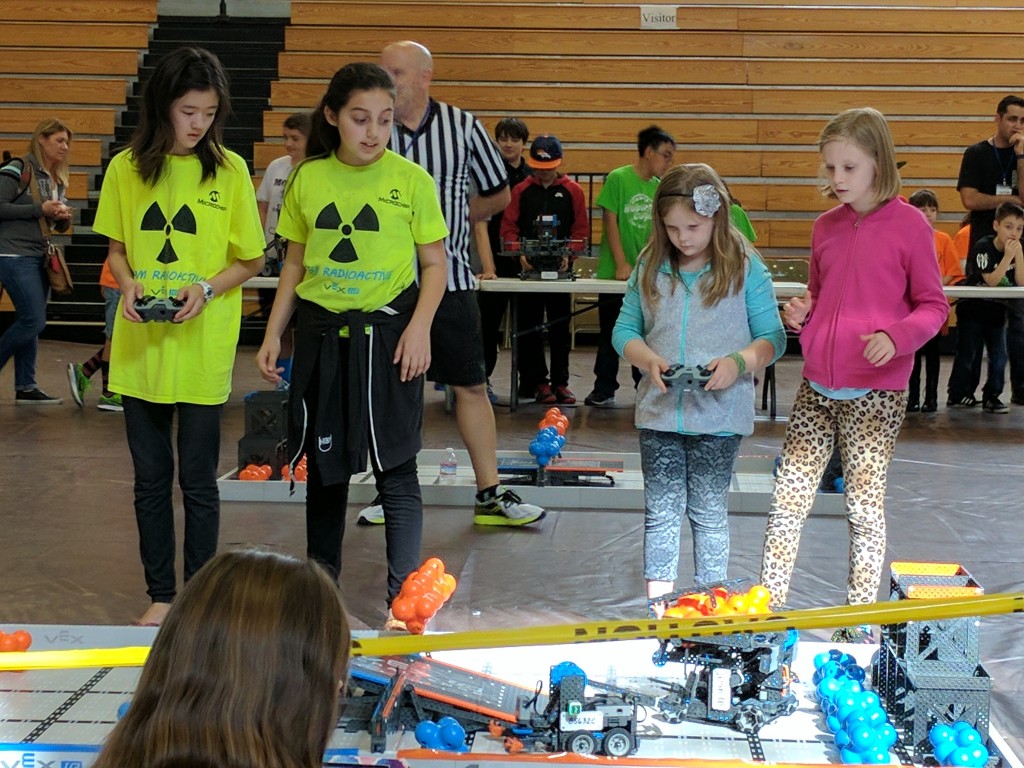 I like this next series of pictures to demonstrate how bossy Rosie can be sometimes.  Yes, it’s usually Ellie but not always. 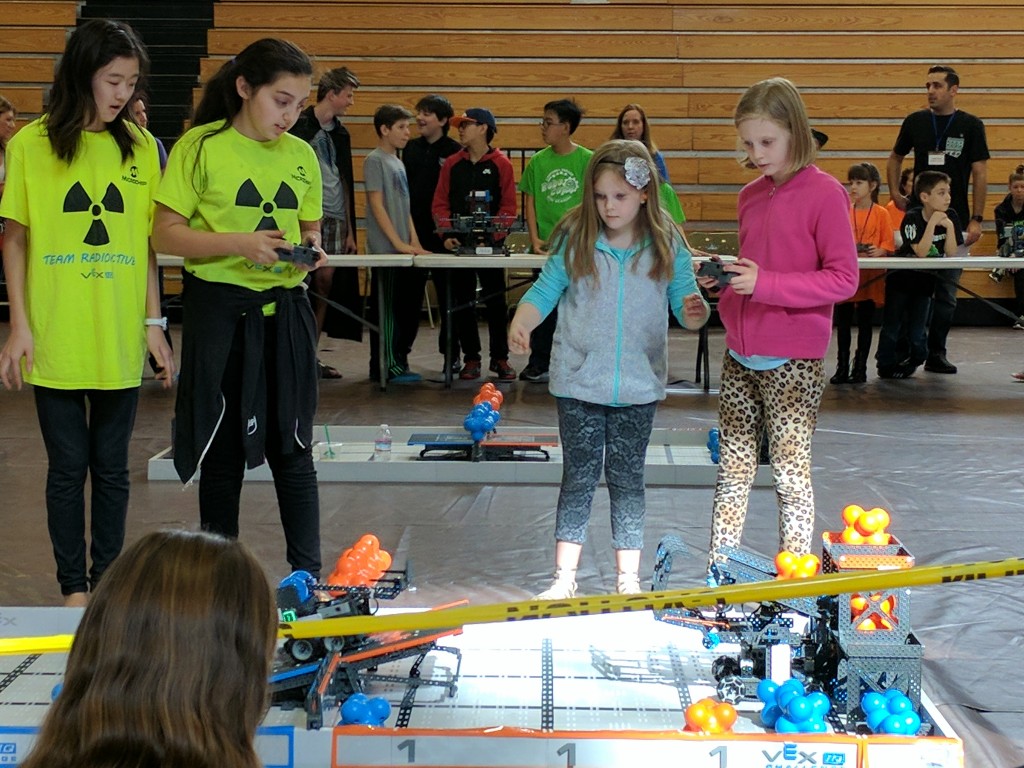 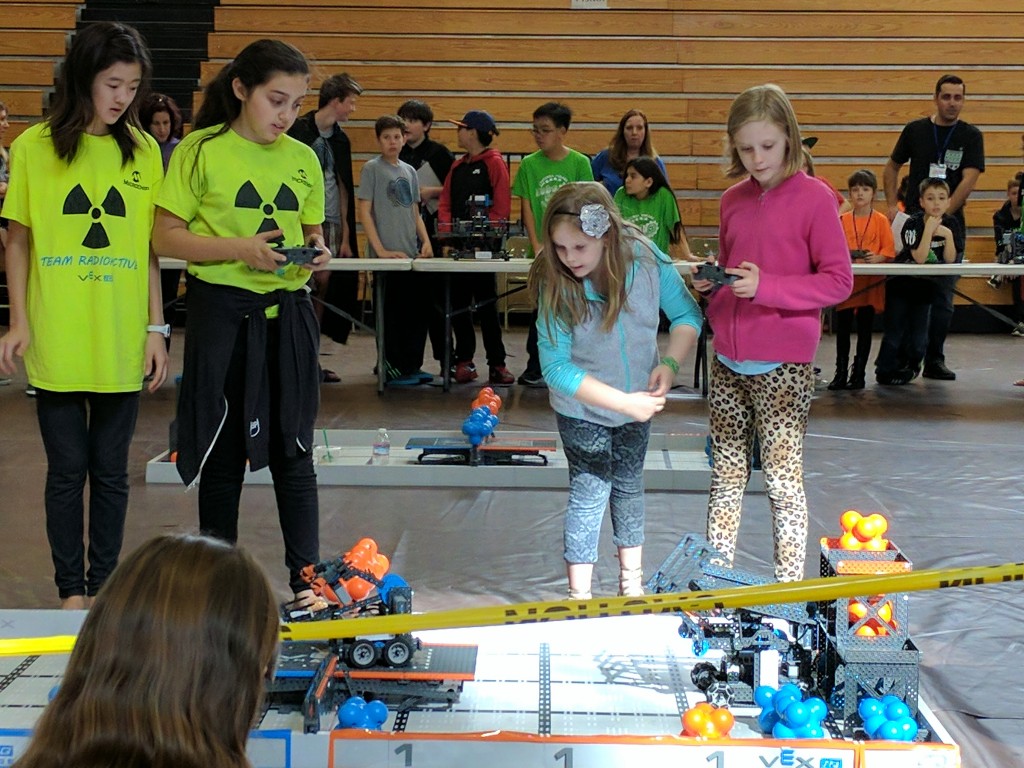 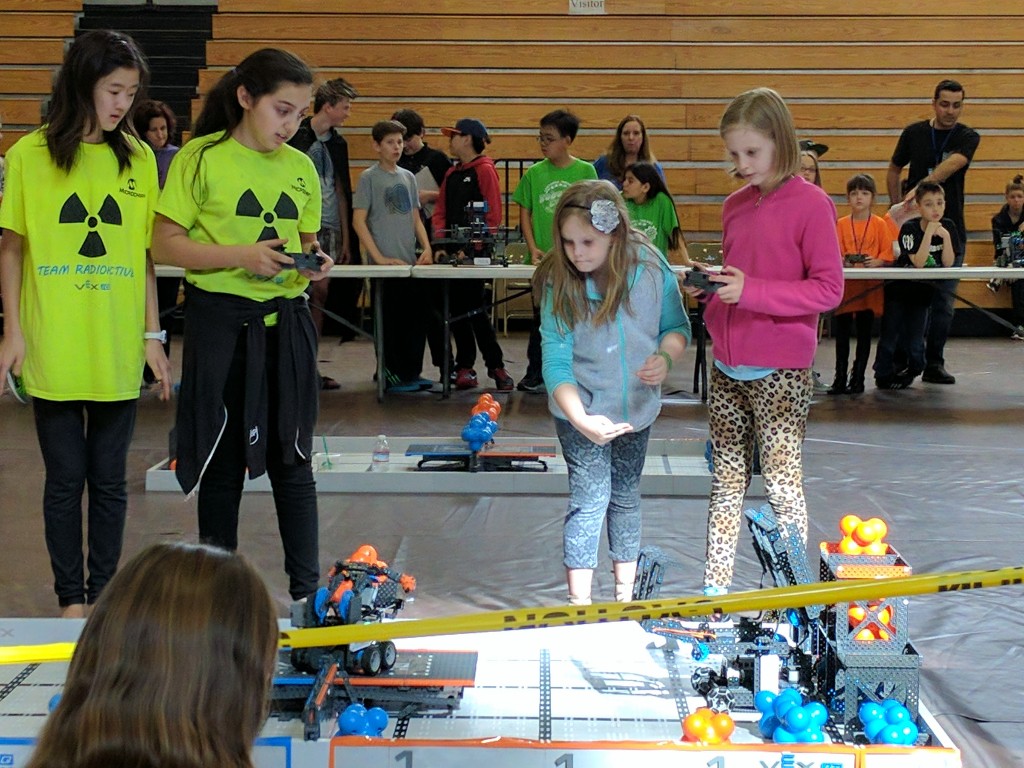 We talked to Rosie about it but here she is begin a bossy co-driver again. 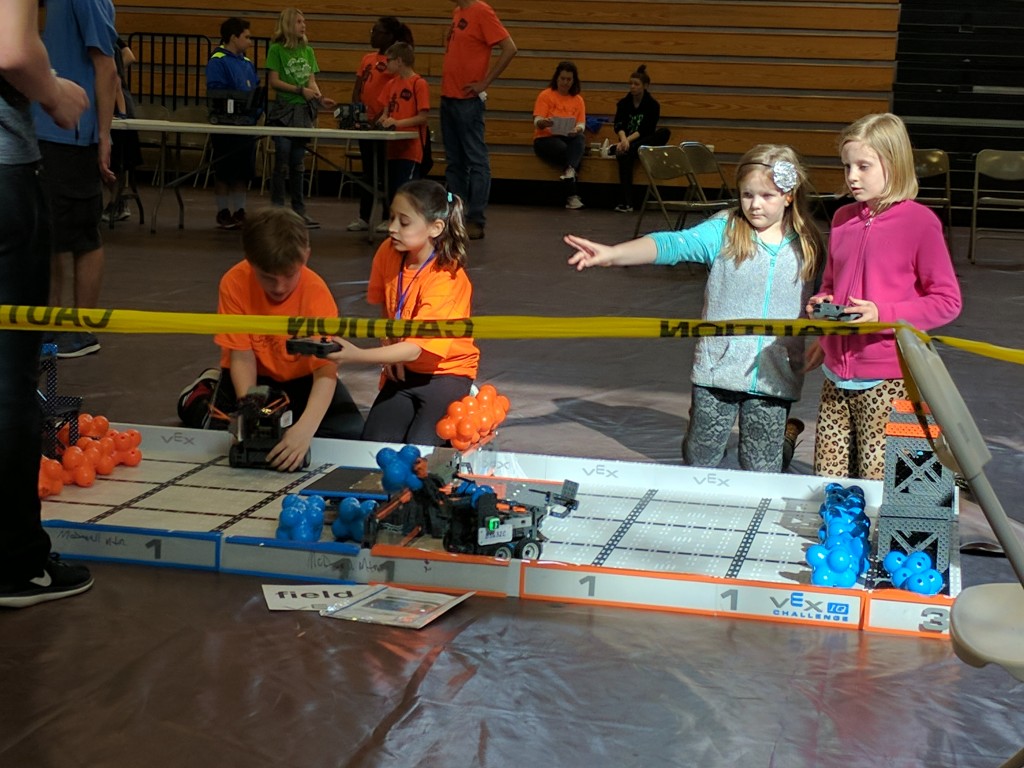 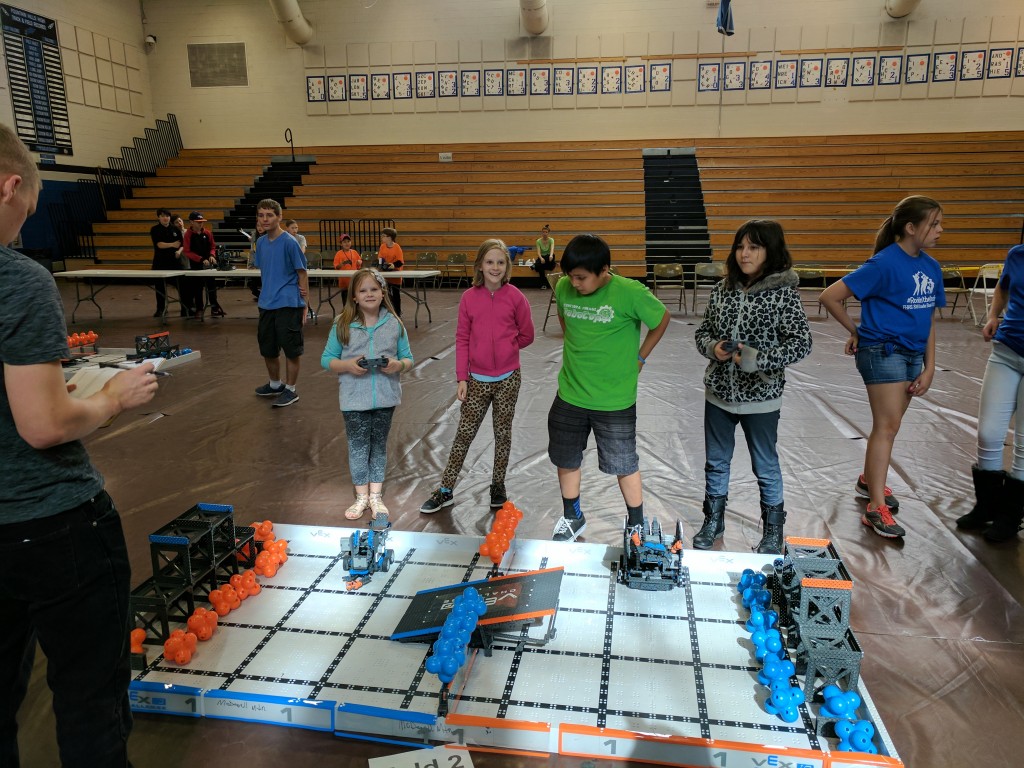 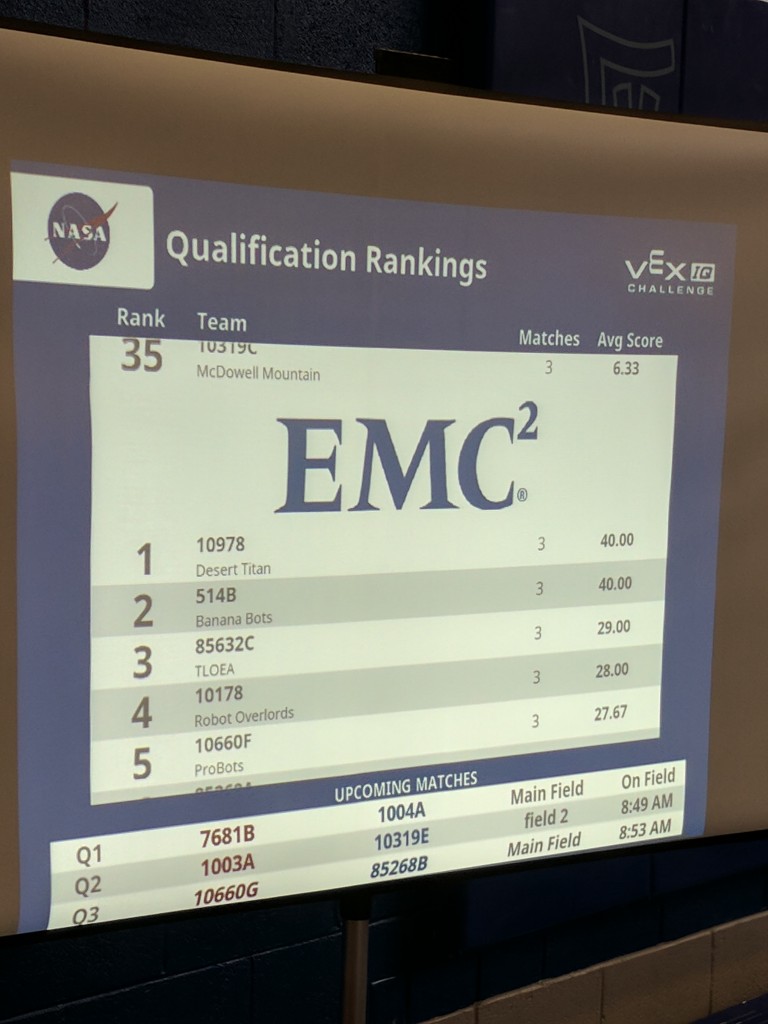 Here is the finals round.  Unfortunately, the team they were paired up with had a busted robot by this time so the other team scored 0 points to help with the final score.  All points were earned by the TLOEA team and we told the girls they should be very proud of that since they only had 1 robot in the finals instead of 2 (all the other teams had 2 working robots to earn points) and ‘still’ ended up in 10th place overall.  I also really enjoy the competition picture where Rosie is being a bossy co-driver again. 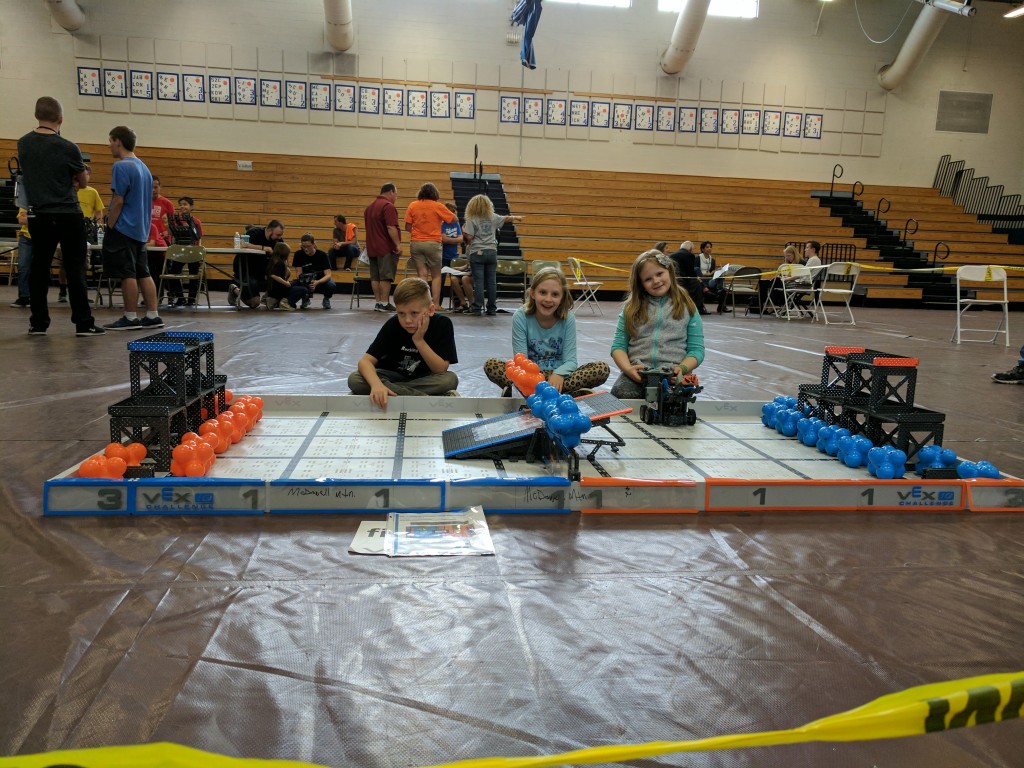 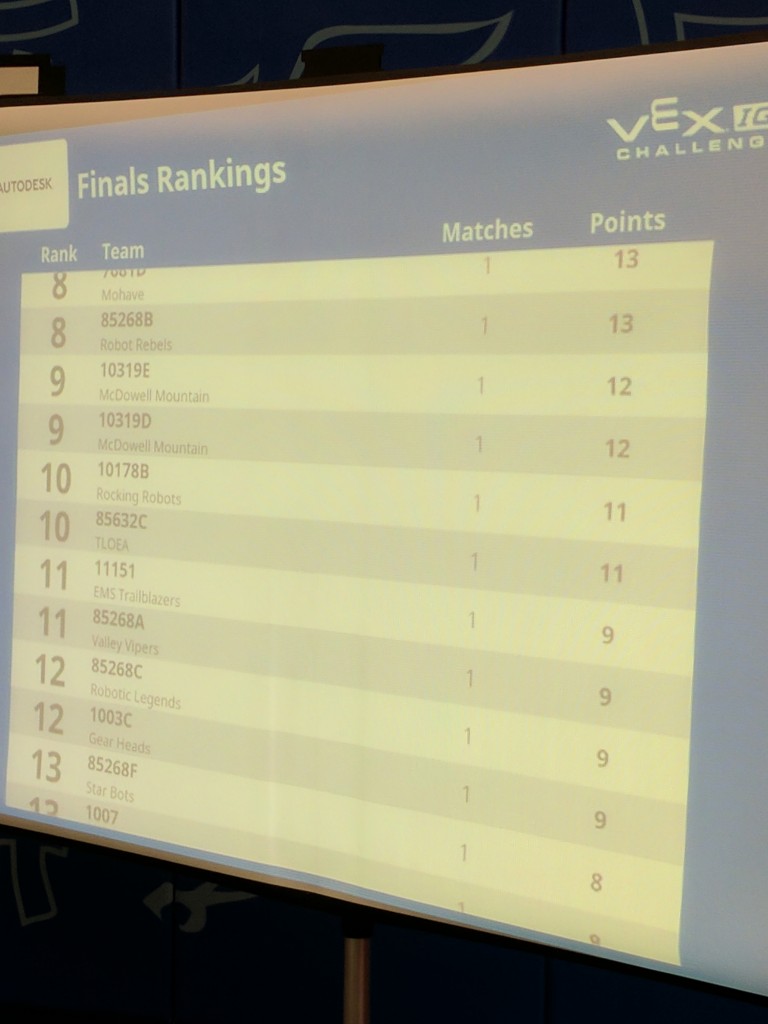 We had a family date the other day and went to go see the Lego Batman movie in the theater.  It was hilarious and we went at a weird time, on purpose, so the theater was basically empty.